The glitz, rewards and flaws of Hip-Hop World Awards 2008 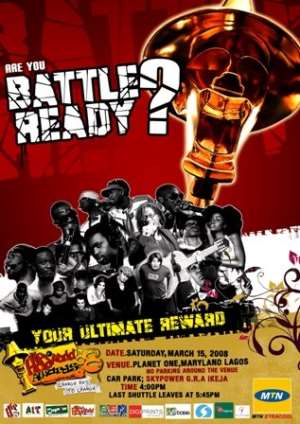 The 2008 edition of Hip-Hop Awards has come and gone, but did it live up to its official slogan: Change Has To Change? From it's inception in 2006, the award was tailored towards becoming a yardstick for awards of its kind in Nigeria, the 2008 edition was no different. The glitz, the glamour, and of-course, the MTN yellow carpet, all gave the event what has come to be its usual touch of class and a style that is just different from every other event in the country. From the beach party held on Thursday, March 13, to the Awards Night proper on Saturday, March 15, everything about the ceremony had an aura of excellence and perfection to it that could only have been achieved through the kind of diligence and thoroughness that went into its planning.

The awards ceremony was held at the events hall of Planet One, Maryland, Lagos, and it is, undoubtedly, a night to remember! The ceremony was co-hosted by the delectable Dakore Egbuson, and humour merchant, Bright Okpocha (a.k.a Basket Mouth). The first performance could not have been better than it was. Cobhams treated the audience to a jazz piece that was as masterfully composed as it was delivered. Other performances on the night were equally captivating. There were performances by Naeto-C featuring Wande Coal, GT da Guitarman, Roof-top MCs, and a host of others. The awards are held yearly in honour of producers, singers, and cinematographers who, in the last one year, have given their best towards making the Hip-hop, R&B genre of the Nigerian music industry an attractive prospect for both listeners and investors alike, and they were dully honoured. The best vocal performance (Male) award was picked-up by the rave of the moment – Abolore Akande (a.k.a 9ice), while the female category of the same award was notched-up, deservedly, by none other than Bukola Elemide (a.k.a. Asa).

The best R&B, Pop album was, of course, won by 2face Idibia. The best reggae, dance-hall album award was picked-up by another rave of the moment – Timaya. Well, like we all know, there is no award ceremony that doesn't have a touch of surprise, or what some would refer to as 'Upsets!'. The best rap single award, according to reaction, was by the most unlikely winner. The category had on parade the likes of Roof-Top MCs with 'Lagimo', Jimmy Jatt ft 2face, Mode 9, and Elajoe with 'Stylee', Naeto C ft Ikechukwu with 'U Know My P', but guess what; the winner was M.I with 'Crowd Mentality'. Talk about a little David amongst Goliaths, eh! Ruggedman went home with the best rap album award, and D.J Jimmy Jatt and his crew did not go home empty-handed after-all! He walked away with the award for the best collaboration. In all, it was a night when professionalism and diligence were celebrated, and excellence was not only encouraged – it was well rewarded!

Talk about organisation; the car-park was situated away from the venue so that the guests wouldn't have to worry about the security of their cars, or traffic in and out of the venue. Everybody was chauffeur-driven back to the venue from the car-park in exotic cars with Police escorts. The yellow carpet was breathe-taking, and have we mentioned the ushers? Absolutely gorgeous! But, all these could have gone down well, and very well indeed, with everybody if the same meticulous arrangement had been made for the departure of the guests. There were virtually no vehicles to take people back to the car-park, especially those that couldn't stay throughout the duration of the ceremony, because the awards proper started about three hours behind schedule. The event was supposed to start by 6:30 pm but it did not kick-off until about 9:30pm, and some of the guests were seen complaining bitterly because of the grave inconvenience they had to go through to get to where they had to park their cars. Also, some of the award presenters looked like they were totally lost when they were on stage, and the winners' songs should have been playing on the low while everybody was waiting for them (the winners) to make their way to the stage to collect their awards. The night was saved though by the wonderful anchoring skills of the hosts who practically had to make-up for the inadequacies. On the whole, the HHW 2008 awards was not a disappointment.

Nima Clashes: I ran for my life after hearing gunshots - Res...
44 minutes ago