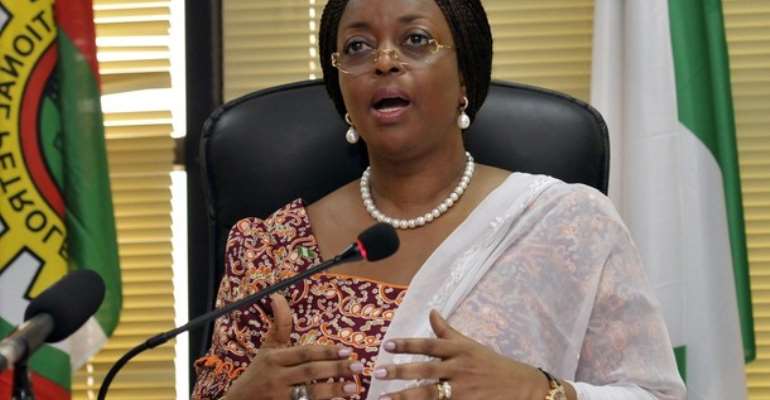 Impeccable sources within the Presidency and the delegation of the Nigerian National Petroleum Corporation (NNPC) disclosed that the minister's two rooms were booked under a pseudonym.

Saharareporters discovered that Joe Mordi, one of the minister's closest aides who works at the NNPC office in London, booked her into a one-bedroom suite at Four Seasons Hotel located at 57 East 57th Street, New York.

When SaharaReporters inquired at the hotel, a staff said that the suite cost $5,000 per night. Ms. Alison-Madueke, who is known around Presidency circles as “Prime Minister,” was also booked into another room at the Pierre Hotel on 2 East 61st Street in New York where President Goodluck Jonathan lodged during his stay in New York. SaharaReporters found out that her room on the 28th floor of the Pierre Hotel cost Nigerian tax payers $3,000 per night. There were also additional charges in taxes and service fees.

Ms. Alison-Madueke arrived in New York in style on a private jet on Monday from London where she had made a brief stop to continue treatment for an undisclosed ailment. She is billed to return to London today. President Jonathan left New York last night around 6:00 p.m. and has arrived in Nigeria very early today.

SaharaReporters also learnt that, apart from the lavish double accommodation enjoyed by the Petroleum minister in two of New York City's most expensive hotels, her delegation of seven NNPC officials also engaged in other acts of reckless spending. “The NNPC hired ten limousines to ferry its 7 officials, including the General Managing Director,” said our source. Five of the limousines, rented for $1,800 each per day, were stationed permanently in front of the Pierre Hotel while another five were put to the service of the NNPC officials at the Four Seasons.

The Nigerian delegation's profligacy during the New York trip earned the attraction of America's mainstream media. New York-based National Broadcasting Corporation ((NBC), one of the top three television networks in the US, yesterday reported that African delegates from the poorest countries stayed in some of the most expensive hotels and shopped in high-priced retail stores during the UN General Assembly. The network focused on delegates from such countries as Togo, Swaziland, and Nigeria. SaharaReporters had earlier reported that President Jonathan was quartered at the Pierre Hotel in a suite that cost $10,000 per night.

International measurements of social indices routinely rank Nigeria as one of the world's least developed countries. Some 70% of Nigerians live on less than 2 dollars per day. “It is sad that the mindless waste of public resources in New York by President Jonathan and other Nigerian officials was happening at a time when two million Nigerians have been displaced from their homes by ravaging floods,” said an Abuja-based civil society activist

Take NPP’s money but don’t vote for them – Naana Jane to Asi...
53 minutes ago