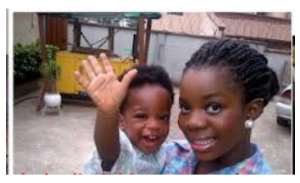 There were several reports last year that Wizkid had become a father. The singer didn't make any attempt at denying or confirming the story. Now an anonymous reader has sent pictures of the singer's baby mama.

The sender claims the lady in the picture is Wizkid's girlfriend, Shola who had a child Boluwatife for him last year. Shola is 21 and she recently finished from North American University. Boluwatife clocked one not too long ago.