Davido, Wizkid At Loggerheads, May Take Fight To Streets Like Pasuma, Osupa Saheed 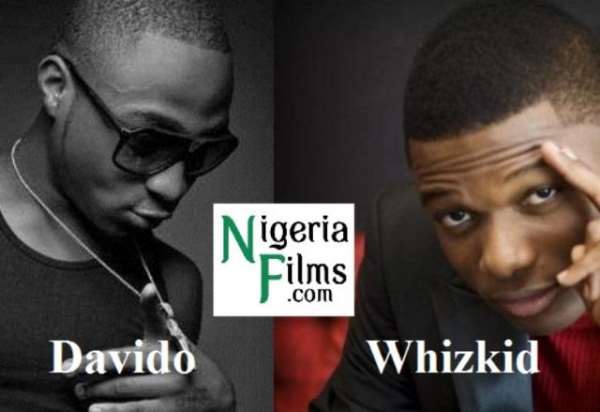 Disturbing news exclusively reported by NET about two young singers, Davido and Wizkid may get dirty if it is not quickly dealt with by icons in the industry.

According to what NET reported, all seem not to be well between the two former close pals. At the September 2, 2012 NEA awards held in New York, USA, Davido reportedly walked out on Wizkid when the latter mounted the stage to perform at the event.

Sources then revealed to us that Davido stood outside doing nothing but may have intentionally walked out because he didn't want to see his 'rival' perform while he would be watching.

Report says that strain in the relationship between Davido and Wizkid may have started when news went round that Davido was signed on D'Banj's record label. This, as it was reported, caused his relationship with Wande Coal to hit the rocks as Wande' boss, Don Jazzy was no longer in good terms with D'Banj after their reported split early this year.

Both Wizkid and Davido were reported to be learning the ropes from Wande Coal, who they took as mentors, until Don Jazzy, as reported, ordered Wande Coal to cut off his relationship with Davido after the latter decided pitched tent with the Kokomaster, D'Banj.

It was even reported that Davido had initially planned to feature Wande Coal and Wizkid in two different songs of his but both stylishly shunned him. First, Wande Coal was reported to have told the 'omo baba olowo' to pay 1.5million Naira to have him on his song. Davido was reported to have wanted to go ahead to provide the cash, but his manager, Asa Asika stopped him.

Secondly, Wizkid was reported to have told Davido that his beat, which he reportedly made for the collabo to featured Wizkid on, was below standard. This, as reported, angered Davido and the battle line was drawn from that moment.

Wizkid was said to have declined doing any duet with Davido because of Wande Coal, who was reported, may have told Wizkid to do so.

These disappointments by his 'friends' was reported to have led Davido to have done the song in his album titled 'All of you,' where Davido said he was better than 'everyone', but paying tributes to the likes of 2face, P-Square and D'banj as mentors.

This, as reported, may have been the brain behind the absence of EME and Mavin records crew at Davido's OBO album launch concert held in July 2012 in Lagos.

As at press time, we were unable to contact either parties to react to the story, but we hope to get their reactions soon as we get them.

For now, it is being feared that fans of both promising artistes might result to abusive ways in handling this news. It is also feared that this does not result to fights being experienced by fans of Fuji musicians who take such developments sentimentally like the reported hatred between fans of Pasuma and Saheed Osupa.

NIGERIA POLICE: What Is Going On Here?

“I Can Never Be Caught Smoking” Chindima

May D Set to Drag P-Square to Court

NIGERIA IS MY SECOND HOME-Jackie Appiah

It's A Lie, I Have Had Sex In The Past 2 Years--Nonso Diobi Declares

Nollywood actress in court over alleged illicit affairs on location