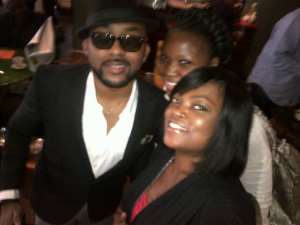 Nollywoodgists.com can confirm that the trio of Funke Akindele, Banky W and Yaw have arrived the city of Coventry for the prestigious Olympic Torch Relay holding tomorrow, Sunday, July 1 in Coventry.

The trio were the lucky Nigerian celebrities picked to join ex-Olympics gold medalist, Kanu Nwankwo to carry the Olympic Torch heralding the Games starting on July 27, 2012 in London.

They were lodged in Coombe Abbey Hotel on Brinklow Road Binley, Coventry. The hotel was built as a Cistercian Abbey in 1150 but renovated in 2001 by its present owner, No Ordinary Hotels. It stands in 500 acres of parkland.

The Olympic Flame will stay overnight in Coventry, then leave on Monday, July to other cities. The Torch will finally end in Leicester City before the Games. The bearers will visit Coventry Cathedral and the Ricoh Arena.