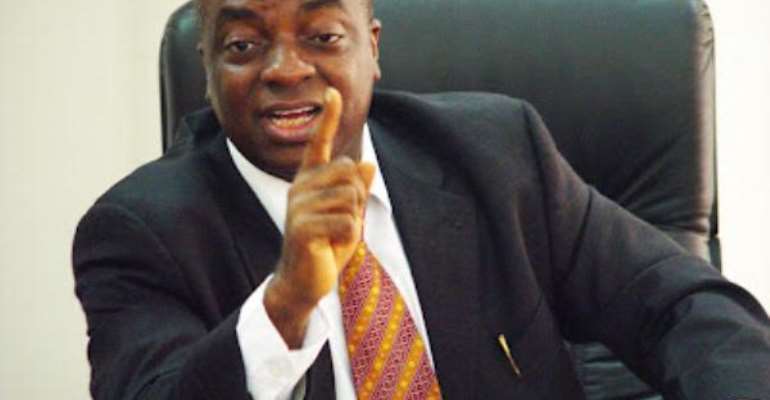 The founder of the Living Faith Church, a.k.a. Winners' Chapel Bishop David Oyedepo, is not leaving anything to chance in his defence against the N2 billion suit slammed on him for allegedly slapping a young female member of his congregation.

The multi-billionaire pastor has secured the services of a Senior Advocate of Nigeria (SAN) Mr. Dele Adesina to defend the matter which was filed by a Lagos-based lawyer, Robert Igbinedion, in April on behalf of the young lady. Igbinedion in the suit sought for the enforcement of the lady's fundamental rights to freedom from inhuman and degrading treatment, human dignity, fair hearing, and freedom from discrimination. He also prayed the court to award the sum of N2 billion as general and exemplary damages' against the bishop as well as compel him to publish a public apology in two national dailies and one international satellite television.

Initially, when the matter was filed, two members of the church, F.B. Agbanwu, the church solicitor and Olugbenga Adeboye, a senior legal officer in the church, filed a preliminary objection on behalf of Bishop Oyedepo.

However, at the last adjourned date, Mr. Dele Adesina in company of other lawyers announced his appearance in the matter and informed the court that he has taken over the matter. Although most of the issues raised in the 32-page prelimary objection by Dele Adesina (SAN) were similar to those raised by the first defence team, Mr. Adesina argued that the court is incompetent to adjudicate on the matter as the case borders on assualt. He contended that slap being an act of assault is outside the provisions of chapter four of the 1999 Constitution of the Federal Republic of Nigeria and the African Charter on human and people's right and as such the court lacks jurisdiction to entertain the matter. ìThe cause of action or principal claim in this application centres merely on slapping one Miss Justice by the 1st respondent.

The slapping of Miss Justice is an act that could be described as an assault which is a criminal offence punishable under the criminal code. ìWe submit that slapping being an act of assault, an item outside the provisions of Chapter 4 of the 1999 Constitution and the African Charter, this court therefore lacks jurisdiction over same.î Mr. Adesina also argued that the petitioner has not shown the court that the said Miss Justice who was allegedly slapped by Bishop Oyedepo, is a living person.

He maintained that until Miss Justice is produced in court, the court cannot assume that she is a living person. Mr. Adesina further argued that that there is no record of anyone called Miss Justice – a sobriquet given to the young lady for the purpose of the suit – in any of its services organised in the past.

Furthermore, he urged the court to determine whether Mr. Igbinedion is capable of 'bringing this kind of application' before it and whether 'it is proper to bring this application against Bishop Oyedepo and his church respectively. Responding on the issue raised by Bishop Oyedepo's lawyer whether the lady who was slapped is a living person, Mr. Igbinedion told P.M.NEWS this morning that the reason he chose not to produce the lady in court is because he fear for her life. He said certain unknown persons have been threatening to kill the lady if they sight her anywhere. He added that he hopes to intimate the court about the development in his further counter affidavit to the court The matter has been adjourned till 11 June, 2012 for adoption of written address. In December last year, a YouTube video of Bishop Oyedepo viciously slapping a young lady who admitted that she was 'a witch for Jesus' during an altar call went viral on the internet. A second video that surfaced days later showed the bishop justifying his action, adding that it is 'his ministry to slap' and that 'if he sees another witch, he'll slap.'

Any attempt by uniformed vigilantes to foment trouble here w...
17 minutes ago

Our spiritual father says vigilantes are being recruited, ar...
24 minutes ago