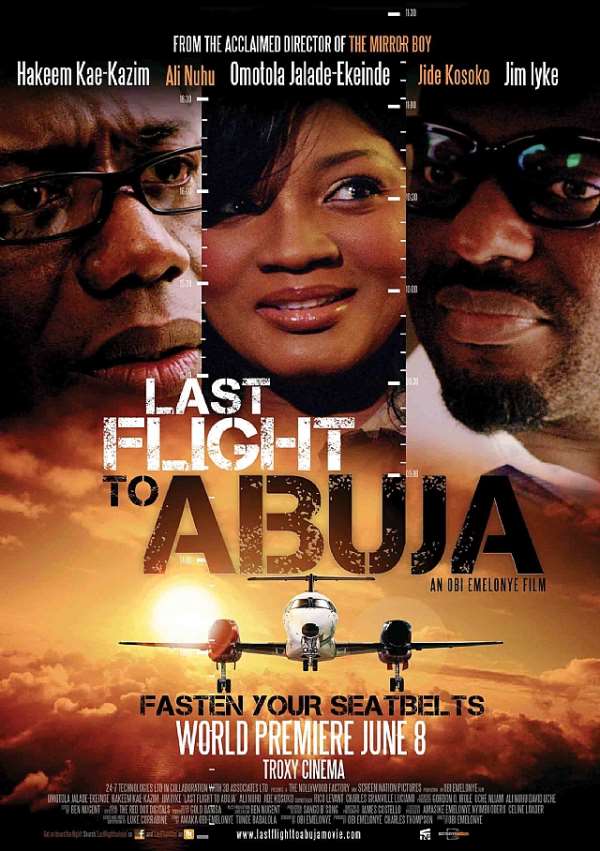 Written, produced & directed by Obi Emelonye, the visionary award-winning UK based Nigerian filmmaker and starring Omotola Jalade-Ekeinde, Hakeem Kae-Kazim and Jim Iyke, Last Flight to Abuja is an exciting new Nollywood film inspired by the tragic series of plane crashes in 2006 that rocked the Nigerian aviation industry. It is with great sadness that just as the film is set to world premiere on Friday 8th June at the iconic Troxy Cinema in London and further elevate and redefine Nollywood cinema, yet another Nigerian aviation tragedy has occurred.

As the final days approach to the premiere of this highly anticipated Nollywood movie, it is with a heavy heart that the producers now dedicate the premiere to the memory of the unfortunate victims of the Allied Air and Dana Air plane crashes that took place in Accra and Lagos respectively on 3rd June 2012.

After full consideration of the effects of postponing and taking full consultation with the lead actors flying in for the premiere, the producers feel that hosting the event is the best way to pay testimony to the memory of the victims of the crashes. To express their solidarity with the feelings of everyone affected by the tragedies, especially those who have lost loved ones, the producers will hold a minutes silence before the film screens and dedicate the film to the memory of the victims of the Allied Air and Dana Air plane crashes and in fact all victims of air crashes in Africa. Further, the producers will look at how to use Last Flight to Abuja as an advocacy tool to highlight the issues of air safety in Nigeria and Africa at large

The producers, the cast and all involved with the film being extremely sensitive towards the expressed concerns of the premiere guests, the Nollywood loving public and concerned citizens everywhere hope these actions in some small part will show support towards the family and friends of the victims and the nations of Nigeria & Ghana as they go through the pain of the healing process of these national disasters.

Our thoughts are with the victims, may their souls rest in God's perfect peace.