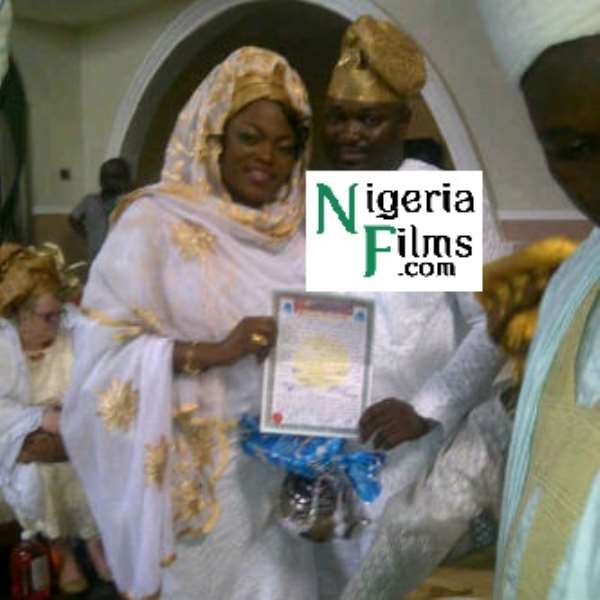 Top Nollywood actress, Funke Akindele has officially begun her matrimonial journey to the household of the Oloyedes yesterday, Thursday, 24th of May 2012 and this is authoritative.

The first phase of the nuptial which is the mandatory Islamic traditional wedding known as the Nikkai is done with already. The event which took place at the residence of the Akindeles in Lagos was one witnessed by strictly family members and Islamic clerics.

Be the first to know that former Miss Olufunke Ayotunde Akindele has now officially become Mrs Khadijat Olufunke Ayotunde Oloyede.
She got her new name at the Islamic marriage rite performed on brides known popularly as 'Wonka' . With that singular act, Funke is now legally married to her politician/real estate lover, Alhaji Kehinde Oloyede a.k.a Ken Doo under sharia law.

The much advertised nuptial between Funke and her heartthrob, Kehinde Oloyede will climax on Saturday, 26th May at 'All Seasons Plaza, Agidingbi, Ikeja, Lagos where the traditional engagement is expected to hold.

Though, some people are of the opinion that the All Seasons' Plaza syndicated is fake as she plans to use the Havens Event centre, Oba Akinjobi Road, GRA, Ikeja. Her reason, as we're meant to believe, is to divert the attention of unwanted guests away from her controversial wedding.
-nollywoodgists.com