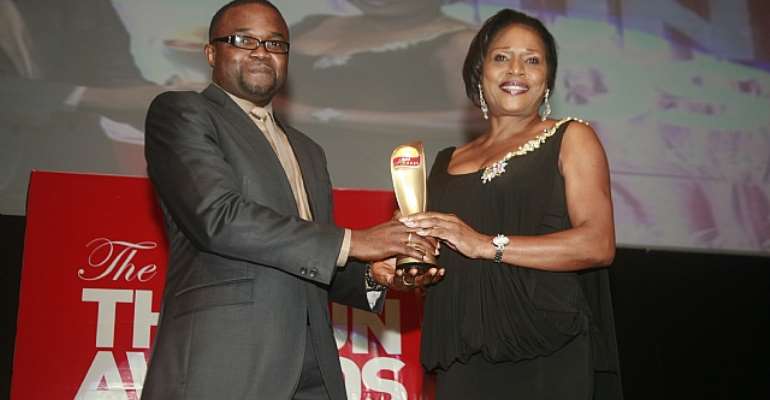 Having proven his worth in the industry, and achieved a lot in the little time he came into prominence, and also achieving a feat most producers and directors before him could not achieve, multi talented producer and script writer Obi Emelonye was recently honored with the prestigious award of Sun Newspaper “Creative Man of The Year” an award which seeks to reward exceptional creativity in the industry.

A man of many parts, the theatre arts graduate of University of Nigeria who recently won the Sun Awards ' creative man of the year' is not resting on his hoarse in taking the movie industry to greater heights through his creative ideas.

According to Sun Newspapers for a person to qualify to receive this award “ the recipient must be a beacon in creative or performing arts who has demonstrated unqualified dexterity and distinctive imagination in developing and showcasing new and original ideas, in an artistic context, thus elevating our cultural values, ethos and mores during the year under review”

An award well deserved ,Obi Emelonye a passionate writer, director and producer has earned the reputation of all as the brightest creative mind in the movie industry with the caliber of works he has produced hence his recognition as the most creative person of the year by the Sun Award crew.

Some of the movies written, produced and directed by Obi include; “Echoes of War”, “The London Successor” “Lucky Joe”, “The Asylum” and his latest multiple award winning movie “Mirror Boy” have all received consistent positive critical reviews and a number of awards.

The movie “Mirror Boy” was the turning point in Obi Emelonye's career as it shot him into prominence and stamped his authority in the industry as a force to reckon with. The success the movie made at the cinemas was never before seen as the movie racked in over 18million naira in box office and premiered in different countries around the world.

Over the years Obi Emelonye has redirected the face of cinematic experience in the movie industry with his bold new cinematic identity for Africa through his many blockbuster movies which have won countless awards since their release to the cinema. Uniquely, Obi Emelonye was the first person to release a Nollywood film theatrically on United Kingdom's screens in 2004 with his movie “Echoes of War which announced the emergence of African cinema into the UK mainstream.

Obi Emelonye's last movie “Mirror Boy” created a lot of buzz in the industry when the movie was released and the movie which also went had to rake in over 35million naira in box office sales and nearly over a year of its release, the movie continues to amass plaudits at festivals and has now become the most awarded film in Nigerian cinema history

With another explosive project on the way, Obi Emenlonye is soon to release his latest movie “Last Flight to Abuja” a thriller based on an ill fated flight from Lagos to Abuja which will premier soon. Starring some Nollywood legends like Jide Kosoko, Omotola Jalade-Ekeinde and Jim Iyke, and some impressive new faces like Hakeem Kae-Kazeem, Ali Nuhu, Anthony Monjaro, Jennifer Oguzi and Uru Eke amongst others, this movie is based on a true story.