‘D’BANJ AND OTHER AFRICAN STARS’ 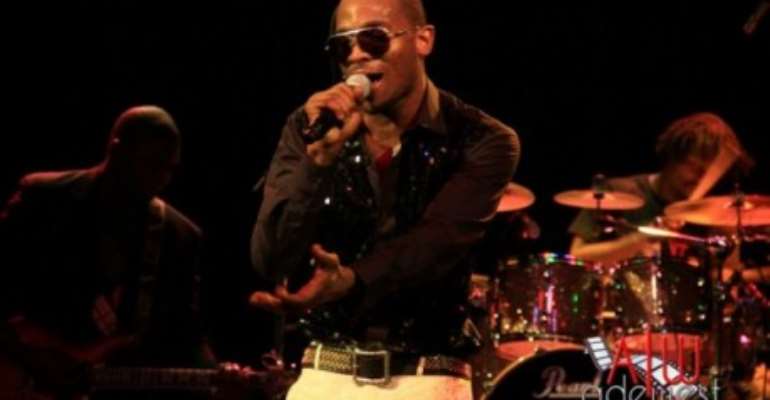 There was talk of kokolets all Sunday night at Irving Plaza. D'Banj, the Nigerian pop star who was headlining the show, boasted, 'I have too many kokolets around the world.' Later on he wondered, 'Can I get two kokolets that can dance better than my dancers?'

If it seemed like D'Banj, one of the quickest-rising stars in Africa, has a one-track mind – kokolets, in his lingo, are beautiful women – that wasn't far from the truth. As a style, his was as monomaniacal in focus as Miami bass, one lusty come-on after the next.

He is at the forefront of an emergent style loosely called Afrobeats by some, a mélange of hip-hop, R&B and other traditionally urban sounds with elements that hark back to older African styles.

In practice on Sunday all that meant was that D'Banj, backed by a live band, was a thoroughly accessible pop star. He emerged in a gold-sequined dinner jacket and began the night with a harmonica solo of 'My Love Is Your Love,' the austere Whitney Houston hit. Before long he was undulating around the stage, his microphone at his crotch when it wasn't at his mouth.

Switching back and forth between singing and rapping, primarily in English, D'Banj was never less than enthusiastic, an entertainer above all, and one used to much larger stages than this one.

Accordingly, the show had the feeling of a significant event. The crowd was slickly dressed, skewing young and African. Outside before the show a correspondent for the Lagos radio station Cool 96.9 FM was recording a report on the scene.

Along with the producer Don Jazzy, D'Banj recently signed to Kanye West's G.O.O.D. Music label, a rare example of a mainstream contemporary African star being given an opportunity to work with an American record label. Mr. West recently performed with D'Banj in London.

But that's just one step in an evolution that's been unfolding for some time. Mo' Hits Records, D'Banj's home label, has a range of young talent, and during this show several label mates shared the stage with him: Don Jazzy, the brawny crooner Wande Coal, the limber dancer Dr. Sid (who came onstage to Dr. Dre's 'I Need a Doctor'), the quick-spitting rapper Ikechukwu, the deeply charismatic D'Prince, and more.

D'Banj was the main attraction, but there was plenty of stage sharing among the crew. Wande Coal was particularly impressive, sometimes attacking a song with force, other times caressing it with a soft coo. D'Banj was maybe less nuanced, but that was very much the point. After one song that sounded like what would have happened if Michael Jackson had recorded a Nigerian highlife record, he shrugged and said, 'It's not my fault that I'm bad.'