REMOVAL OF OIL SUBSIDY IN NIGERIA: THE ONLY WAY FORWARD.--- Gov. Sullivan I. Chime of Enugu State 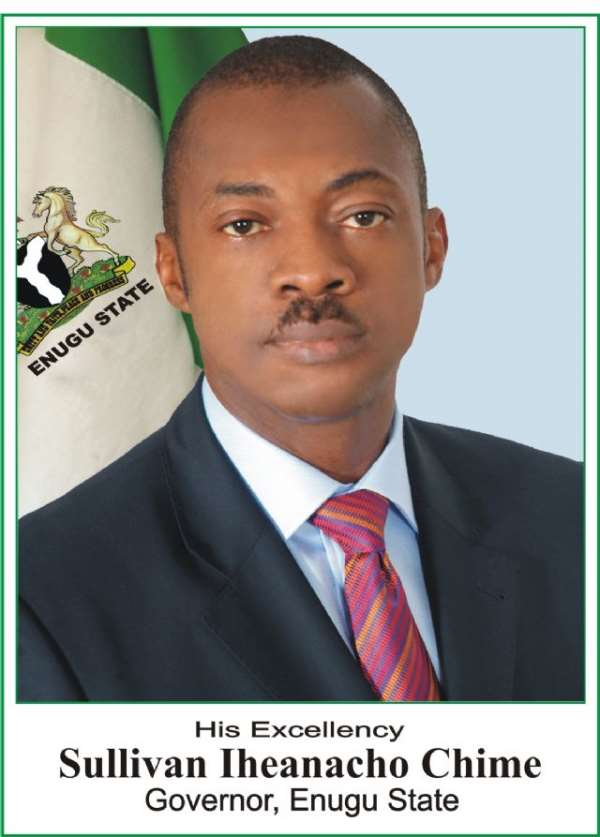 In nationwide Broadcast to the people of the country on the first-day of January, 2012 the President Federal Republic of Nigeria Dr. Goodluck Jonathan announced his government's removal of subsidy on premium motor spirit (PMS) otherwise known as petrol.

To Mr. President, in his wisdom the action of government to remove subsidy on the downstream sector of petroleum (PMS) was taken in good fate and in the best interest of the masses. But unfortunately and ironically too, the very masses which government was trying to make their life better misunderstood the whole action and therefore took to the street to protest against the government and her policy.

The nationwide protest which greeted the subsidy removal that put the pump price of fuel at N141.00 per liter as against the N65.00 per liter was like no other before it. This led both the Federal government and some Governor's of various states to take appropriate steps to contain the situation depending on the magnitude of the protest in their respective states.

In Enugu State for instance, the Governor Mr. Sullivan Chime rose to the challenge and took steps which left no one in doubt that he was in full control of affairs in the state. Apart from his passionate appeals to Nigerians to support Mr. President's action, he advised that they should see the removal of oil subsidy as an action taken by the Federal Government in their best interest and the nation's economy. Among the places Governor carried this campaign to include Nsude in Udi Local Government Council where he addressed catholic priests of Enugu Diocese at the Sacred Heart Seminary. He explained to the clergymen the whole truth of the matter as regards the deregulation policy.

According to him they are in a better position to disseminate the information and provide their congregation with accurate information about the deregulation exercise and any other issue affecting the state and the nation.

Governor Chime said that the ban placed on public processions in the state while the strike lasts was not targeted at striking workers but a security measure taken in the large interest of our people to avert the dreadful possibility of hoodlums taking over the protest to cause mayhem.

These steps taken by the Governor paid off because while states like Lagos, Edo, Oyo and Kaduna to mention but a few were boiling Enugu state was very calm with both citizens an residents, including school children going about their businesses without molestations.
��
Even when the organized labour suspended the strike action following government's reduction of pump price of fuel from N141.00 per liter to N97.00 naira per liter, Governor Chime continued with his effort to cushion the effect of the deregulation exercise on the people.

First, the Governor introduced free transport services for primary school pupils and secondary school students in the state. When the major and independent petrol markers refused to comply with Federal Government directives that pump price of a liter of fuel should sell at (N97.00) naira, the state government held series of meetings with them on the best way to handle the matter. At the end of the meeting, the both parties agreed to plug all loop holes that would affect steady supply and availability of the product to consumers. They also agreed to dispense fuel at the official price of (N97.00) naira per liter.

In addition, it was also part of the agreement that consumers did not hoard or hawk petroleum with a view to causing artificial scarcity and that marketers are at liberty to load fuel at any depot in the country.

Government made sure that no fuel truck allocated to the state was diverted and that marketers did not exploit consumers of the product in a bid to make more money.

To ensure strict compliance to this agreement reached with petroleum marketers, government thought it wise to constitute a Task force on the enforcement of sale of petrol at the approved pump price.

The task force headed by the state Commissioner for Inter-Ministerial Matter Mr. Chukwuka Utazi, and his team took up the assignment with high sense of patriotism and seriousness it deserved. Apart from the initial problem experienced by consumers of the product and long queue of vehicles at filling stations, the situation in the state was brought under control. Government made sure that marketers have steady supply of the product, while the presence of a combined Army, police and officials of the Civil Defence Corps led by the Chief Security Officer of government House Enugu Mr. Fidelis Ogarabe ensured peaceful and orderly sale of the product to motorists at approved pump price.

Unfortunately and regrettably too, despite all the effort of government to ensure compliance to federal government directive and agreement the state reached with marketers, some unpatriotic citizens and enemies of progress decided to flout the order.

A good number of the marketers and their agents who were caught indulging in the sharp practices were arrested by men of the Task force and handed over to the appropriate authority that subsequently, prosecuted them as saboteurs and enemies of government.

At present, in Enugu state, long queue of vehicles at filling stations have disappeared and normalcy returned in the sale of the product to motorists. Both commuters and motorists now drive into filling stations and collect fuel while transport fair has come down as expected by commuters.

With all these measures in place, it is kudos to the state Governor Mr. Sullivan .I. Chime and his people oriented administration. It takes only a very human and responsive government as we have in Enugu State now that has the interest of the people at heart to arrest the situation and meet the yearnings and aspiration of the masses.

The assurance of Governor Chime and his administration in Enugu State is to continue to ensure peace and good governance, to serve with the fear of God while providing those basic necessities that would make their life better and by extension, transform Enugu state as one of the best state in Nigeria.