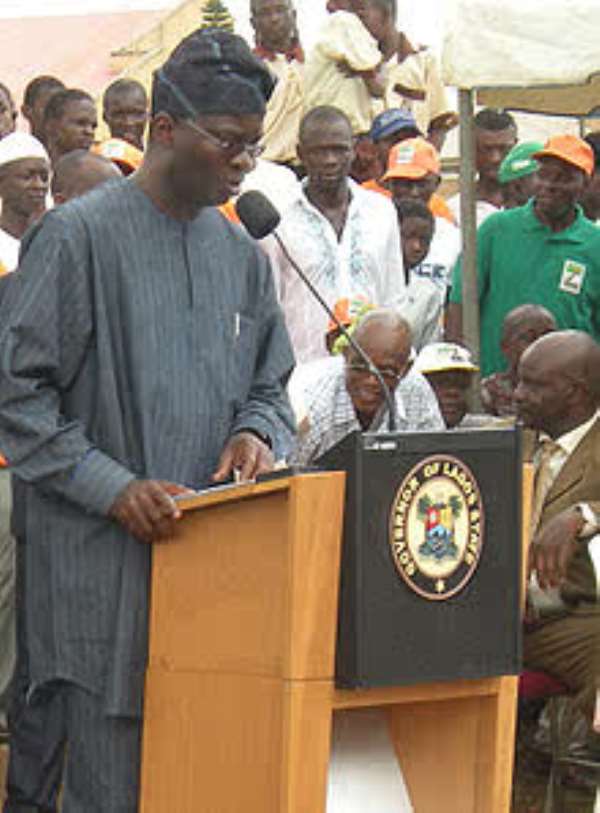 It was a surprise to many Lagosians who woke up this morning seeing the Military all over the streets mounting roadblocks.

Another shocker was when they learnt that the Military were of the mission to stop any form of protest in the state, especially at Gani Fawehinmi Freedom Park, Ojota. The park had before now hosted the protest in Lagos which recorded over a million people on Friday without any breakdown of law and order.

In a broadcast today, the Governor of Lagos State frowned at the deployment of men of the Nigerian Army to infringe on the constitutional rights of harmeless Nigerians doing their constitional duties. He therefore called on President Jonathan to immediately withdraw the Military from Lagos State.

Below is a text of his speech today.

For the past few days, I have monitored the developments related to the public protest against the increase in the pump price of petrol.

During that period, I have at the invitation of my colleagues in the Governor's Forum responded to an invitation from the Presidency.

My role since last Monday till date has been to find a ground of compromise that stabilizes the polity, protects our democracy and prevent any loss of lives.

Inspite of these efforts, we were not wholly successful in preventing the loss of the life of a young Nigerian, AdemolaAderinto who was sadly shot.

I am truly saddened by that ugly development. While I condole with his family, I pledge the commitment of our Government to bring the alleged perpetrator to justice.

I have decided to address you today in view of the very disquieting developments that occurred overnight especially the deployment of soldiers across Lagos.

I have the highest respect for members of our military, especially because they have made a contract with all of us that they will willingly lay down their lives whenever it becomes necessary to do so, in order to protect us.

This covenant is instructive, because soldiers did not sign up to stop us from expressing our grievance about things that we are displeased about.

It is not disputable that the citizens who have gathered in several parts of Lagos like Falomo, Ikorodu and Ojota to mention a few have largely conducted themselves peacefully, singing and dancing while they expressed their displeasure at the way that we have taken decisions that affect them.

That in my view should not offend those of us in Government. The majority of these people who represent diverse interests have not broken any law. If they have, it is my opinion that in a constitutional democracy, it is the police that hasthe responsibility for restoring law and order if civil protests threatens the breach of the peace.

This is not justification for sending out soldiers to a gathering of unarmed citizens. Every one of us, or at least majority of us who hold public office danced and sang before these same people when we were seeking their votes.

Why should we feel irritated when they sing and dance in protest against what we have done?

For me this is not a matter for the military. The sooner we rethink and rescind this decision the better and stronger our democracy will be.

If anything, this is a most welcome transformation of our democracy in the sense that it provokes a discussion of economic policies and this inevitably may result in political debate.

I therefore urge the reconsideration of the decision to deploy soldiers and implore the President and Commander-in-Chief to direct their withdrawal from our streets, I must also emphasize that the rights of free speech and protest is not absolute. They impose the duty not to break the law, breach the peace, endanger human life or destroy property whether public or private.

They also impose the duty to respect the rights of others not to support our protest and indeed to support what we oppose. At the end of the day, it is a contest of ideas in which the most persuasive will get the endorsement of the majority of the people we serve.

I am convinced that our democracy is mature enough to accommodate this. We must do our best to ensure that it does.

God bless you all.