Of racial purity and survival of the Yoruba people 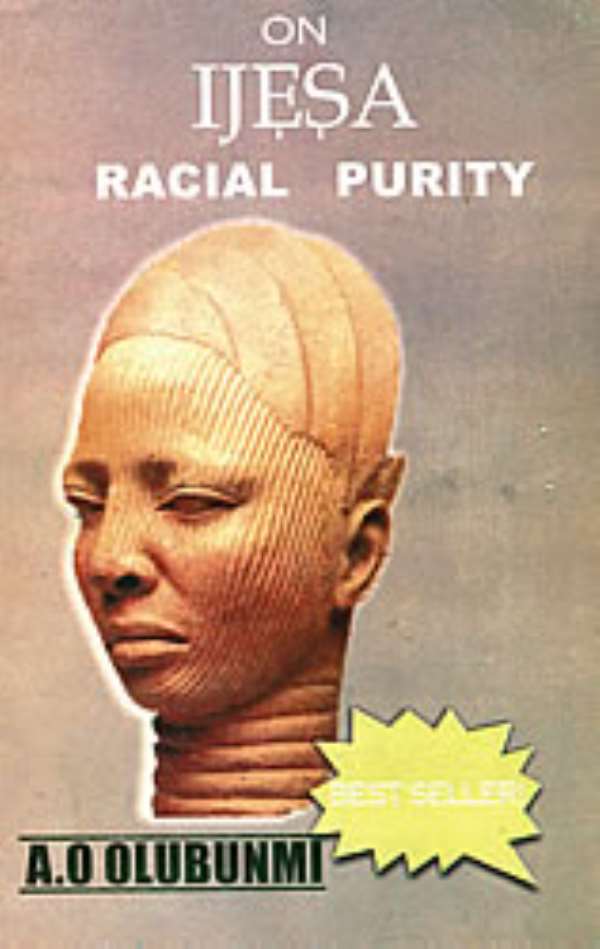 Much research has been carried out on the evolution of the world's races, but Ayoade Oluwaseun Olubunmi has gone a step further by claiming that the Yoruba race is the most unique of all the black races, while he will also definitely incense other Yorubas with his claim that Ijesa is the purest form of the original Yoruba tribes. Adewale Oshodi reviews his book, On Ijesa Racial Purity.

Ayoade Oluwaseun Olubunmi's book, On Ijesa Racial Purity, is bound to generate backlash from different ethnic groups in the country, as well as on the continent, with his submission that the Yoruba race is superior and unique to other black races.

Even, among the Yorubas, there will also be hostile responses with the author's claim that the Ijesas are the purest of all Yorubas, as they have had fewer admixtures with other non- Yorubas, “compared to all other branches of the Yoruba Family Tree such as the Oyos, Ibadans, Egbas, Ijebus, Ondos, etc.

Olubunmi's claim is supported, among others, with former German Chancellor, Adolf Hitler's quote that, “any crossing of two beings at not exactly the same level produces a medium at the level between the levels of the two parents — the offspring will probably stand higher than the racially low parent, but not as high as the higher one. All great cultures of the past perished only because the originally creative race died out from blood poisoning.”

He also supports his claim with Arthur Kemp's quote that, “A civilisation rises and falls along with its originating population — this is the great lesson of history which applies equally to any race in any country. Once the racial composition of a society changes, then that society itself changes.” Kemp, a South African historian and white supremacist, fled his country after the fall of apartheid in 1994.

The interracial relationship that Yorubas had with other non-Yorubas, the author claims, is the reason the Yoruba nation finds itself in the position it is at the moment. One of the problems brought about by this racial admixture, according to Olubunmi, is the sickle cell disease.

In supporting this, Olubunmi states that “the type of sickle cell that affects Yorubas is different from that which affects all other Nigerians. Yorubas became infected with the sickle cell trait via miscegenation, while other Nigerians had it in them for thousands of generations… If no Yoruba had ever had sex with a non-Yoruba, there would be no Yoruba 'sickler' or carrier today.”

The author also asserts that the Yoruba people are the original inhabitants of the geographical space called Nigeria, with those in the Northern part of the country living in the Nok civilisation, which existed between 1000BC and 500AD, before it mysteriously vanished.

In his support that the Yorubas actually lived in Northern Nigeria, the book states that the Nok art and the Ife art are shockingly identical, and this could only have come from the same people who had the same mind.

The book starts getting really intriguing when it begins to compare the attitude, way of life and nature of the Ijesas with that of other Yoruba people. The author says the Ijesas are physically stronger and healthier than other Yorubas; had better diet; enjoyed higher standard of living; had more self-confidence, and the Ijesa army was the first non-white African army to use rockets and machine guns. “The Ijesa Army advanced very rapidly during the 16-year-war of 1877-1893. In early 1881, the Ijesas started firing Snider Rifles at the Ibadans, who were still using dane guns”

Now, the essence of the book is to ensure the continued existence and domination of the Yoruba race over the other black races, and in achieving this, Olubunmi asserts that, “No Yoruba should ever get married to, or have unprotected sex with a non-Yoruba”

To him, those who have parents who are not Yorubas, cannot claim to be Yorubas themselves. He says the Yoruba blood is immiscible and very sensitive, in that, offspring of Yorubas who are married to other tribes will definitely have the manners of the tribe the Yoruba is married to. “I have heard a rumour that alleges that former President Olusegun Obasanjo's father was Igbo.

It it is true, it means Obasanjo is not a Yoruba person — and that explains a lot.”

The author's way forward for the Yoruba race is one that can cause disharmony among the different tribes in the country. If he were to be a white man, he would have been labeled a racist or white supremacist, and his ideas can stir up feelings or provoke action from people of other tribes/races.

However, the book, On Ijesa Racial Purity, which comes in a question and answer format, is an addition to researches on the black race, and there is no doubt that the author's submission will definitely generate instant reactions from Yoruba people who have been classed as not been as pure as the Ijesa people, as well as from the other tribes in the country.

Published by The 199 Publishing Palace, one of the shortcomings of the book is that it does not give the background of the author, whether he is a historian qualified to explore the history of the Yoruba people. The only thing the book tells readers about the author is that he had also previously published a book, The Rise and Fall of the Yoruba Race, which was published in 2007. Also, the publishing house, The 199 Publishing Palace, did not include its office address. However, the book will make an interesting reading by all sections of the society.