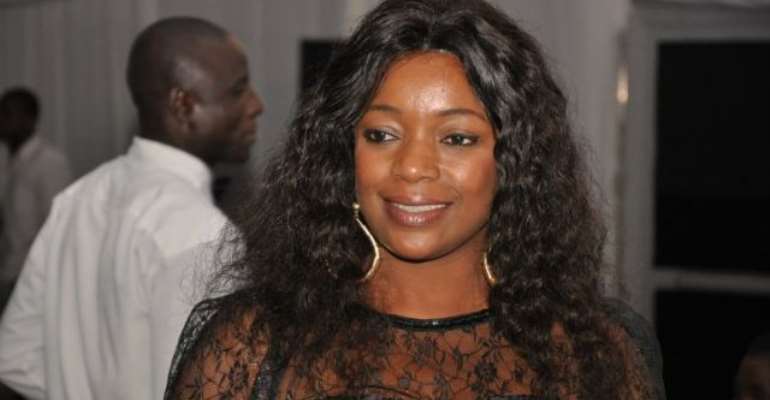 .. Bimbo Akintola is one of Nollywood's most versatile, as well as controversial actresses. The Oyo state-born actress had her diploma and first degree in theatre arts from the University of Ibadan. Though she has had her share of scandals, the cross-over actress became popular for her role in Richard Mofe-Damijo's 'Out Of Bounds', and more recently, in '90Ninth Day', which premiered at the Silverbird Galleria, recently. Anthony Ada Abraham had a brief chat with her . . .

You were part of the cast for the movie '90Ninth Day'. How do you feel?

I am actually exhilarated, and though I did not get to watch the movie, save for the last 10 minutes, due to diversions here and there, I think, from what I saw, it was really okay and nice.

From your latest role, it is evident that you have a thing for controversial roles. Would it be right to say that you love them?

I always act controversial roles, according to people (laughs). I don't think there is anything different from someone who acts controversial role and someone who acts a funny or normal role. The basic thing is that you have to be calm and be a very good character. Do your thing and forget about the rest. When you are on set, you are the master. You must be perfect as a professional, and I enjoy being just that.

Would you say, therefore, that you are versatile?

I would love to believe that I am versatile, because I like to play different kinds of characters.

You have been in the movie industry for a long time. What do you think about Nollywood's progress?

I think there are a lot of lapses, because there are lots of things which we should be doing, but are not. Also, we have achieved a lot a lot in the industry: I say that, because the industry is not where it was in the past. We have come a long way to bring all these together. It is a great source of income to a lot of people and has generated employment both for the young and old. Lots of people benefiting from the industry today. That is a huge plus, but not a destination.

You put in so much into your role in 'The Morning After'. How much?

In 'the Morning After', I played the role of a 40-year-old mother of two teenage daughters who went through a lot, because of the complexities of the Igbo tradition, as regards the kind of treatment meted out to widows.

In the movie, she went through a range of emotions; sadness, depression, and at a pont she was almost insane. I had to cut off my hair, because of the mood of the film, you know? I wanted to drive the message home. It was all an integral part of the story.

Besides acting, what else do you do?

I have this talk show I'm producing (oh, if I keep talking about my talk show, one day, people will begin to stone me if they don't see it). Maybe, I am being a perfectionist, but that is because I want it to be good. I will always give my best effort. I don't want to give the people anything shoddy. Point is, I do have a talk show that I have been working on for quite some time now, on and off. I'm taking my time.

Have you signed any contract with any particular TV station for this show?

I have not thought about a particular TV station, but I'm thinking about a network. What I'm working on is a talk show on topical issues, things that affect each and every Nigerian, in whatever way, small or big. Things that we need to address, things that people never want to talk about but are a part of the problems in the society.

What is the greatest thing that has happened to you?

The fact that, at a tender age, I found out what I wanted to do and stubbornly (you can call it any other name, but my mother says it is stubbornness) wanted to achieve it.

Is that stubbornness paying off?

Yes, because it enabled me to do what I have always wanted to do.

Your first movie in the English genre was 'Out of Bounds'. How bad was the feedback from your fans?

What was the character about, really,other than the acts of a wayward girl?

She is just a girl crying out for help. You know that when children want your attention, they tend to behave badly. She wanted her parents' love and attention, because she believed she wasn't getting any of that. She did all she did in the hopes of getting some love, as she believed they didn't really love her.She didn't need to conform, but at the same time, she wanted them to love her.

How were you able to handle the negative publicity it gave you?

I don't think it gave me a negative image. Nobody has come up to me to say “You were some kind of a bad girl”. Instead, I have heard comments like “Oh, I love that character, you played it normally”, so I don't believe it gave me a bad image.

I learn from my mistakes, but harbour no regrets, really.

Is there any hope for new comers?

Definitely, there is. You see, there are a lot of new faces in the industry. Even people outside the country are now starring in our movies. The industry is doing a lot for them; there is a lot of completion now than there was before, because more people are coming into the Nigerian movie industry.

Where do you see yourself in some years to come?

For me, I am producing, because I want to tell people what I see. When you talk about films, basically there would be so much thinking and loads of work, so people must know what I see. When I talk about a script or production, I want to pass across true life issues to the public through movie, and I know that lots of people will enjoy what I will be dishing out.

As a producer, which movie should we expect from you?

A lot of them (laughs). Like 'sometime in December'. It is till in the works, but before that, I will be releasing a new one. Watch out for it.