I am living in Paradise - Mohammed Manga, The suicide bomber who bombed Police Headquarters 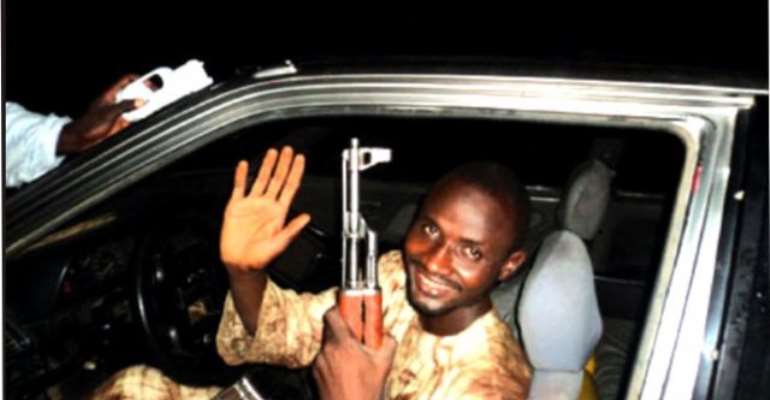 The heat generated by the bomb that exploded at the force headquarters, Abuja, is yet to simmer down weeks after the gory incident happened.

This has culminated into a lot of tension in the federal capital territory and other northern parts of the country.

Mohammed Manga, a 35 years old businessman was the suicide bomber who executed the act. Shortly after he carried out the sucide mission, he was said to have put a call to one of his friends that he was on his way Paradise.

Prior to the emergence of the Boko Haram, Nigerians only read in the papers or see on television, the gory pictures of bombings and these incidents had been the pastime of Afghans, Pakistanis and Lebanese. But today, it is happening right in our presence in the Northern part of Nigeria.

An Islamist sect called Jama'atu Ahl-Sunnati Lil Da' Awaited wal jihad, otherwise known as Boko Haram, has variously claimed responsibility for the bombings and its objective, going by the name, is the islamisation of the country, beginning with the North, through Jihad.

The Boko Haram sect limited its operations, to selected states in the North with its operational Headquarters located somewhere in Borno state and from there, the sect infiltrated Bauchi, Niger and lately Abuja.

The attack on the force headquarters, Abuja, on June 16, 2011, was the limit of a dastardly act and the mastermind of the bombing has been unmasked. He was called Mohammed Manga, who is said to be a successful businessman, 35 years old with a family of five children.
Manga, the envy of his colleagues in the Boko Haram, set out on his journey to eternity with a mission to head for paradise in service of Allah.

Information pierced together by National WAVES point to a more frightening development and there are disclosures that Manga is the fore runner of the over 100 suicide bombers, set to die in similar deadly circumstances, in service to Allah. Manga is the envy of his fellow Boko Haram faithfuls.
National WAVES investigations reveal that the Boko Haram fanatics and bombers receive their grueling training from Afghanistan and Pakistan. Besides, the materials for manufacturing bombs are easily within their reach and in Pakistan for instance, guns and already manufactured bombs can be bought across the counter.

Security experts have raised alarm that the bomb trainees may be waiting to be unleashed on the Nigerian society, some of them anxiously waiting to put their newly acquired skills to use.

Even as government has begun a massive crackdown on the Boko Haram, the sect is still welcoming fresh converts in their hundreds and the new converts are enthused by Mohammed Manga's courage and devotion to Allah.

The arrest of over 100 Boko Haram men in Kaduna and the detonation of some bombs are not far from lending credence to our checks. From all indications, there is a nexus between this evolving developments and media reports that Al Qaeda is planning to operate from Nigeria.

Security analysts have formed the opinion that this could be possible because of the professional negligence of our security agents and our porous borders, through which foreign dissidents pour into Nigeria.

Another dangerous dimension to the ensuing scenario is the ease with which members of the sect infiltrate government, military and police formations.

Our checks reveal that the Boko Haram sect have informants everywhere, who leak to the sect the movement of certain persons, time of some events, the best time and right place to strike. Available information has it that the bombing of the force headquarters was done with the lead given by the informants, and Hafiz Ringim was their target, to “reward” him for his effrontery to open his mouth too wide right in their headquarters, Maiduguri.

The resurgence of the Boko Haram has prompted precipitate government reactions. Security is on red alert everywhere, particularly in Abuja and the method of executing this has raised fresh challenges.

For over one week, security checks were mounted at all the entry points to Abuja by soldiers, and in the process, collapse a four lane highway to one. The resultant grid lock completely slowed down business and social activities. The situation was particularly bad on Monday, July 4,2011 at the Abuja - keffi road through Nyanya. Vehicular movement from that axis into Abuja came to a standstill.

Vehicle owners were forced to abandon their vehicles while commuters disembarked from buses and taxis to trek several kilometers to their offices. Some of them who left Nyanya or karu, spent six hours while those who could not muster the strength went back home.
Abel Jude who works in the federal secretariat, punctuated his walking with some short rest along the way and just said; “I resign to fate. The fear of Boko Haram is the beginning of wisdom”.

An employee of a private institution simply called Bayo, just said; “see the pains Boko Haram inflicted on me. This is disgusting”. The terrible situation compelled the Nigeria Labour Congress (NLC) to intervene with a statement condemning the method being used to search for Boko Haram foot soldiers. More condemnations of this security strategy point to the fact that a Boko Haram foot soldier with a mission to throw a bomb needs not carry the explosives in the car. They could carry them in the bag and even walk past the check points since those walking are not searched.

Even as security strategy is in top gear, the Boko Haram is not relenting in the bombing. This has become a daily ration for the people of Borno state.

The fear of the Boko Haram is indeed the beginning of wisdom and security experts counsel the redoubling and over hauling of the security strategy because of the fear that other sects may take a cue from the Boko Haram and turn Nigeria to a banana republic.

The security agencies in a combined effort still have an opportunity to rise to the occasion. The security chiefs met with the Senate on July 6, 2011 and came out with assurances that Boko Haram will be contained. Rather than resort to buck passing and parrying blames, the security agencies should restrategise and as one expert put it, “ they should adopt modern methods of tackling terrorism”.