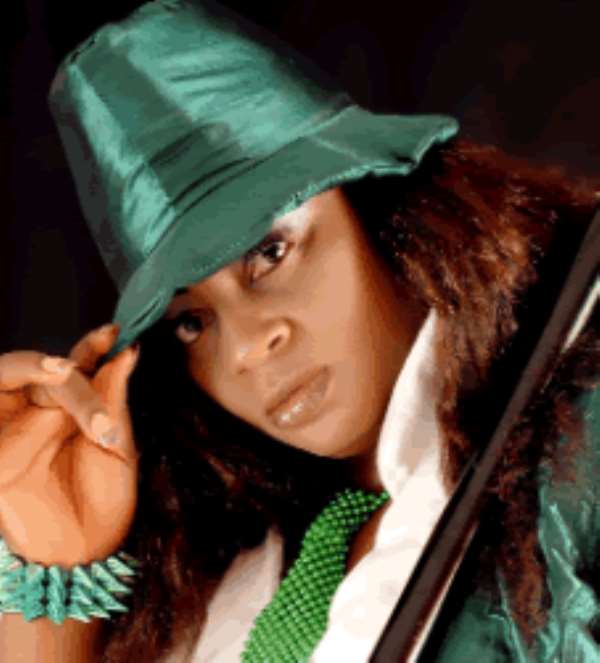 For Blessing Amaka Akigwe, actress, singer and costumier, opting for the music as a career was something her parents opposed. This was because they felt she would be wild and be involved in scandals as some actresses do.

But the young singer was not deterred. She stuck to her choice and eventually won the hearts of her parents who later encouraged and supported her. Blessing (a.k.a Akibam) who hails from Idemili Local Government of Anambra State has featured in a number of films, in which she equally served as costume designer. And as a gospel musician, she has since released her debut album, Impeccable Anointing which today, is enjoying airplay on radio and TV stations across the country.

She spoke on her music, sources of inspiration, role models, piracy aside airing her views on the difference between Nigerian and Ghanaian movies.

Background
I am Blessing Amaka Akigwe popularly known as Akibam. I hail from Idemili local Government Area of Anambra State.
I now reside in Ghana, I attended a nursery and primary school in Anambra State. I also attended Queen of the Rosary College (QRC) before studying English/French at the Anambra College of Education. I later studied Accountancy at the University of Nigeria, Nsukka.

Foray into acting
I came into acting and costuming 10 years ago through a friend who introduced me to a producer. I was given a script to read and also got the job to be the costumier of the same movie. The first movie I featured in was Beautiful Enemy. Since then, I have featured in a lot of movies.

Getting roles
I do receive phone calls from directors or producers inviting me to feature in their movies because they believe that I can deliver the roles assigned to me. Also in costuming, they call and give me scripts. I read and interpret the works well. Due to some of the works I have done in the past, they still call me to participate in their movies because of their faith in me.

Movies featured in
I have featured in quite a number of movies Some of these include; Confidence, 40 days and 40 nights, Love is a game. Lagos Night, Heavy war, Nine wives, The heart of man etc while the movies I have costumed include Naomi, Kings of Kings, Beyond Believe, Lion of Africa 1 & 2, Atinga, Bizzy Body, Royal Insult, Goddess of the Sun, Evil queen, Palace Slave and Touched by an angel.

Between Nigerian and Ghanaian movies
I prefer Ghanaian movies to Nigerian movies because they take their time to shoot movies but in Nigeria, producers rush the artistes to shoot their movies. For example, if a movie in Nigeria takes a week to shoot, in Ghana, it will take three weeks because it is well planned and executed properly. I would say that both of them are financially rewarding.

Coming into music
When I was young, I loved music and dance. When I did my youth service in Kaduna, I won a dancing competition and people began to call me Kalewa Ever. I was in a group where we danced. Also in my secondary school, we had a group of dancers and singers to which I belonged.

When I gained admission to the College of Education, I joined a theatre and dance group, which performed on stage to entertain students. But my parents initially did not support me because they felt the industry would make me to be wild and be involved in scandals. But as time went on, they saw that I was determined, they changed their minds and gave me their support. My kind of music is gospel Hip-hop and my debut album is entitled Impeccable Anointing, which was produced in November 2009. It is a combination of Raggae, Rap, Jazz. and Awilo rhythms. In my songs, I used English, Igbo and pidgin English. Today, the album my is enjoying airplay across different stations in the country.

Some of the tracks in the song include The Lord is my shepherd, Being Radical for Jesus, Having a very big God, The Lord is my light and salvation, My help comes from God. Everything we do in this world comes from God, and in His time, every individual will make it in life. My music inspires people to always put their trust and confidence in Him.

Inspiration
God is the major source of my inspiration. Another source of inspiration my immediate environment and some of my experiences in life. Life is not always rosy, so when I am in a difficult situation, I put my trust and confidence in Him and He brings me out of that situation.

Role models
My role model in the women industry is Women of Faith because I like their kind of music and their mode of dressing. Their music has inspired a lot of people across the world. In the movie industry, my role model is Liz Benson because of her ability to interpret her roles very well.

Piracy
Piracy has eaten deep into the society and pirates are reaping where they did not sow. The government is trying but they should do more to curb the activities of pirates. Pirates should be exposed when they are caught and they should be made to face the law. For example, I once gave my music to a marketer and he told me that it wasn't selling. When I traveled to Ghana and I was in a restaurant to do self-marketing, I saw a trader who told me that he has my music in his shop and I asked him, where he bought the CD's and he said he bought them from Alaba International.

Message to my fans
I will encourage them to ensure that they know God in spirit and in truth. They should be their brother's keeper. I would also like them to keep supporting me. They should expect more from me and I will not let them down.