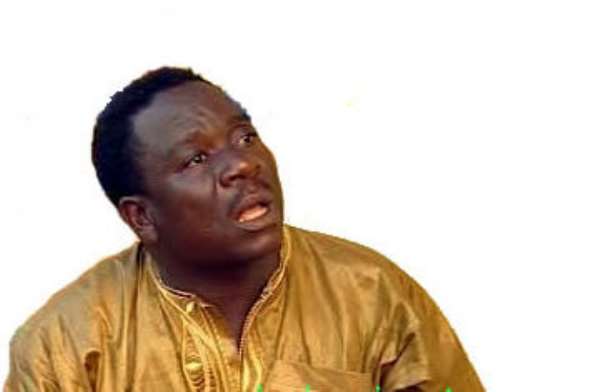 FOR some observers of trend in Nollywood, John Okafor has become something of a hardened comedian who interprets scripts in his own way—most times to a level that critics have described as 'hilarious imbecility'. In fact the Enugu state born actor who is popular as Mr. Ibu interpretes his role so well that his teeming fans often find it difficult to draw the line between Okafor and the role he plays in movies. Today the former refrigerator technician, hairdresser, factory worker and itinerant photographer has become very successful as an actor. A devoted disciple of the genre and a gifted humour creator, Mr. Ibu who wandered into acting by chance, has grown immensely popular that his biggest problem now is privacy and relaxation. 'I can hardly go anywhere without being mobbed. I have become a public property' he says
The bulky actor also found time to reflect on the passing away of Samuede Efeimwonkiyeke a.k.a Sam Loco Efe.

Can you still recall the journey here?

Well the journey here has been okay. I thank God for bringing me this far. I started all this as a joke and in fact, got into it by chance. But it started for me even though I didn't do it as something I wanted to take as a profession from primary school, all through the secondary school and even when I entered higher institution. So, it is a long time that I started being a fool. I recall my teachers asking me often if I was alright, but I always told them that it is a gift that God gave me to make people happy and forget their sorrows and pain. And that gift has not only opened so many doors for me but has put food on my table. I may not be a millionaire, but am very comfortable.

But even though God gave you the talent as you claimed, there must be someone who inspired your incursion?

Yes my grandfather. He is one man who inspired me. Back then in Eziokwe in Nkanu West Local Government Area of Enugu State where I come from, my granddad used to entertain the villagers with jokes. He was like a local champion. So I took after him somehow and to make a difference, I became an idiot who made people laugh from the way I talked, walked, appear and so on. People just start laughing once they see me. Now, people don't take me serious even when I am serious. It is a problem in a way, but I have devised how to manage that problem. I just begin to cry and when they know that I am not joking, they rush to me.

Once, you mentioned that the late Sam Loco was a heavy influence on you?

Yes he was. I mean, apart from my grandfather, there were other people I encountered on screen that influenced my incursion and the late, oh, I hate to describe him as the late, Sam Loco was one of them. I consider him one of our greatest and irreplaceable actors. I still did not believe he is gone. He is one man that played my father consistently in movies. If I have done 20 jobs, he played my father in 19 and that made us very close. I keep on talking with him even on phone because we have a project together. We were supposed to be at the American Embassy for our visa interview and I called him to give him this information, but no one picked the call. When I called again, someone picked and told me that he had fever the previous night and was still sleeping and will talk to me later. Then not long after, I started receiving calls from people about his death. He will be sorely missed. He was a jolly good fellow—-a master of the craft. I am still trying to walk out of the shock of losing him.

Okay, let us leave that now and talk about your staying power and why you are devoted to just playing comic roles?

If I tell you that I know something else apart from God, then I am a liar. I attribute it to God and God alone. He provides strength. As for comic roles, I am a very flexible and versatile actor but funny enough I have been stereotyped into playing comic roles. I always want to take up other roles but it is not something that I can dictate. I take on roles that I am given. But I still believe in my ability to take up any role.

And the name Mr. Ibu has replaced your given names?

It has and it is not funny even though I am enjoying it. Once someone came around where I live and was asking about John Okafor and people were just wondering who he was looking for; but as soon as he mentioned Mr. Ibu, they pointed to where I lived. And funny enough, I have been answering that name Mr. Ibu before Andy Chukwu wrote that script. He only added a Mister to the normal name they have been calling me and that film turned out to be something else because I was completely an idiot in that film—a very stupid animal. In fact, the character was an idiot, not me. But Ibu came about because of my size. Ibu means load, something with some weight and I have considerable weight as you can see.

So, has acting been very rewarding?

Well, it depends on what you mean by rewarding. If it is being rich, well I am not a rich man, but I am not hungry. God has been so wonderful. People love me so much. Do you know I get cars and money gifts from here and there? People stop me on the way to dash me things because I have brought joy to them. One man stopped me once and dashed me a large sum of money because according to him, I always entertain him and his family. That is the joy. The only problem I have with the whole thing is that people don't take me serious when I am serious. If I am crying now, people will think I am joking. If I stop a lady on the street for instance, she will just say 'hey Ibu, abi you wan use me act again' and the thing wey dey hungry me go still dey hungry me. I no go talk go that side again. I will respect myself and move on. But I am very happy doing this. I enjoy my stay in the industry so much and I will keep staying, especially now that I consider it my main constituency. I don't think there is anything that I will get involved in now that will give me as much as the joy that acting has given me. And my family is happy with what I am doing. They love me to the last. They keep praying for me to succeed and I will never forget them. My mum who is over 80 years is my greatest fan. I love that woman and my family to the core. I love my children too. They answer Ibu more than me. They have been enjoying the fame that comes with this.

Don’t give me reason to close down schools again – Akufo-Add...
26 minutes ago