Man On Ground (A New Movie by Akin Omotoso) 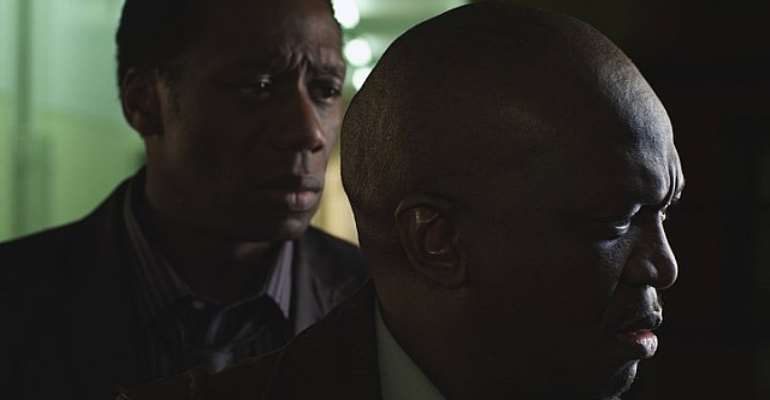 In May of 2008, in the informal settlement of the East Rand near Johannesburg, Mozambican immigrant Ernesto Nhamuave was burned alive while bystanders laughed. The violence eventually quieted down, but its root causes have yet to be addressed seriously; tension is still tangible. The event inspired director Akin Omotoso to write Man On Ground, and the resulting film is not merely the work of a talented and socially engaged filmmaker bearing witness — it is, in Omotoso's own words, “a strong appeal for healing.”

Ade (Hakeem Kae-Kazim) and Femi (Fabian Adeoye Lojede) are expatriate Nigerian brothers. Ade is a successful banker in London, while Femi, once a political dissident in his home country, has had to escape to South Africa, live in refugee tenements and work menial jobs. The brothers have not only been physically estranged, their relationship is riddled with unspoken betrayal, guilt and scorn, which they have carried since the early days of their youth.

During a short visit to Johannesburg, Ade discovers that his brother has been missing for a week. He sets out to investigate Femi's mysterious disappearance, reconstructing the pieces of his everyday life and the cruel hardships he endured just to survive. A riot erupts while Ade is visiting Femi's former boss (Fana Mokoena) in one of the townships. Ade is forced to take shelter with the employer. The mounting violence outside seeps into their exchanges and, eventually, prompts an explosion of revelation.

Structured like a thriller, Man On Ground is a rare descent into the immigrant underworld of Africa's urban centres, as well as a timely and unflinching indictment of the rise of xenophobia in South Africa. Omotoso's finely crafted low-budget indie was shot on location with vérité grit. It is a tightly knit team's labour of love, beginning with Kae-Kazim, whose exacting performance amplifies Ade's personal drama to engrossing metaphorical dimensions.

Starring Hakeem Kae-Kazim, Fana Mokoena, Fabian Adeoye,Lojede Makhaola, Ndebele Bubu, Mazibuko.Film was directed by Akin Omotoso who is Nigerian,and has acting credit which include the films Blood Diamond (2006) and Shake Hands with the Devil (2007). His short films include Rifle Road (2005), the documentary Gathering the Scattered Cousins (2006) and Jesus and the Giant (2008) and he also directed the feature film God Is African (2003).