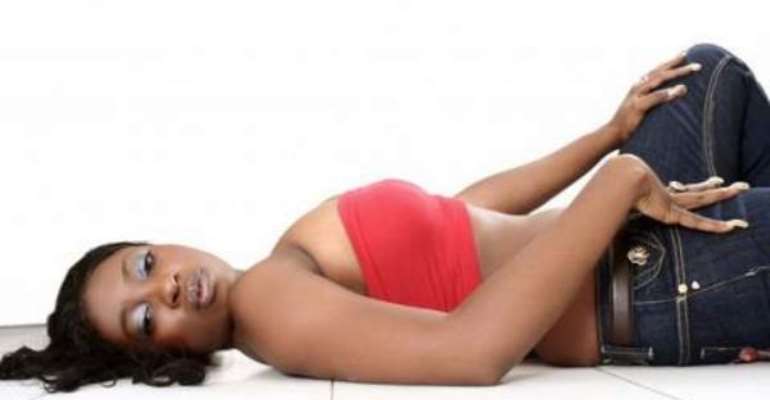 Anita Joseph may not be as popular as the likes of Omotola Jalade-Ekeinde and Genevieve Nnaji, but the actress is one of the most talked about in Nollywood. And though, the Anambra-born screen diva has been reported to have gone off the tube for some time, she, however, begs to differ with such assumptions.

According to her, those who are spreading the report are merely jealous of her achievements.

“The people that say they have not been seeing my movies, are they not watching ***Africa Magic*** or what? Those who said so are the ones who wrote that I'm dating a married man. You should know that there is an atom of jealousy in that,” she said.

Reacting to suggestions that her bum can make men go beyond their boundaries, Anita responded, “People who shake their buttocks are those that don't have it. I don't need to shake it. The structure is marvelous. It is God's gift. What will I shake it for? I don't shake it. The Lord just created me in His own image and made me attractive and sexy.”

She, however, denied allegations making the rounds that she has caused problem in some home due to her natural endowments.

“I don't break people's homes, so I don't expect people to break what I'm building. What I believe in is that you don't let the bad things get you down so you can be there when the good things will come,” she said.

The actress said that she is in a very serious relationship with a footballer, but refused to reveal his identity.

“I'm in a very serious relationship, He is a human being, a footballer. I won't tell you his club. Our meeting was magic, he sent me signal and I sent to him too.”

On who does the “attacking” and who does the defending, knowing that she is in a serious relationship with a footballer, she said, “He does the attack while I defend.”

Like many of her counterparts in the thespian trade, Miss Joseph has had her share of attack by fans. Only recently, the actress who was away in South Africa for the better part of last year and only just returned to Nigeria last month, cried out on how her identity was hacked, after she met with a female fan who contacted her on phone, insisting she had been chatting with her for a while. The female fan even presented a London phone number, which she claimed Anita had given her to use to call her, while she was in London. When the number was called, a man, who was obviously a fraudster, picked it.

“I got a phone call from a female fan who told me she got my phone number from a costumier's phone. She claimed I had given her a London phone number and on trying the number, it was discovered to be a fake customised number, which is used by fraudsters. “To the best of my knowledge, the guy had not succeeded in collecting anything from the fan, but I'm crying out so that my fans would be aware and be more careful so as to avoid becoming victims. The facebook identity, which is used for the fraud, has my name and the user has 50 friends on the profile,” she said.

So, how did Anita's acting career begin? The curvy actress revealed that it all started in 2004.

“It began in 2004. I saw my girlfriend, Azuka in a movie and I was excited about it because that was what I've always wanted to do. I called her to connect me, and she took me to the National Theatre, Lagos. My first movie was Good Samaritan while my first lead role was in Bandit Queen. What many do not know is that Anita is also very much into music, as she has been singing long before acting. Her passion to affect lives positively has made her to awaken the interest in music.

“It's just that I'm beginning to take it professionally now. I use to be in the choir. I just decided to do acting first; I do Dancehall and R&B. I know music affects people's lives and I want to affect people. When I'm not acting, I'm singing,” she said. When will she release her debut album if she claims to be seriously into it now? She said: “I'm not rushing my album because when you rush in, you will rush out and I'm not from Russia.”

Reminiscing on the movie that she enjoyed playing a part in mostly, she said: “I enjoyed Tears in my Heart. I played a character I had never done before. It was just a different thing from the usual. I also enjoy Forgive Me. Producers do not give me good girl roles, maybe because of my looks, but I acted a good girl in Forgive Me. I did it and it was quite interesting, she noted.

Joseph studied linguistics at the University of Calabar and graduated in 2005.