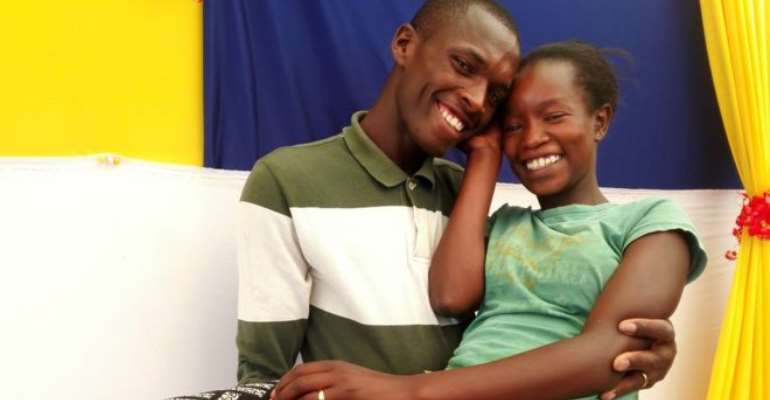 A Kenyan couple unable to afford the expense of a wedding have earned plaudits on social media for pursuing “a budget option $1 ceremony” which they attended wearing casual clothes.

Wilson and Ann Mutura postponed their wedding twice in 2016 because they were unable to raise the $300 (£240) fee.

They decided to get married this year with the minimum of expense.

The groom only spent $1 on two budget wedding rings, which he produced amid cheering during the exchange of vows.

Other expenses surrounding the pair’s nuptials – including the licence fee – were instead borne by their church.

Online commentators have praised their move, pointing out that weddings are becoming increasingly expensive.

The romantic story of Wilson, 27, and his bride Ann, 24, seems to have captured the attention of many Kenyans.

Somali town bans lavish wedding spending
After dating for more than three years, the couple overcame the biggest hurdle in their relationship – money.

Last year their appeals to friends and family failed to raise enough cash.

‘Blessed union’
Wilson told the BBC that his older brother even advised him to forego the wedding and live with Ann without getting married.

But that was not an option for the self-employed fruit seller and his fiancee who wanted “a permanent and blessed union”.

‘I love it so much! – Online reaction
“Who said we have to complicate marriage ceremonies with huge budgets?” Jay Can-did (Nairobi News comment page)

“This is impressive. The most important thing is the marriage, not the wedding.” Daniel Wafula (Twitter)

“Their wedding had nothing, but their marriage will be beautiful,” Beatrice Oloo (Facebook)

“This is wonderful and I love it so much – using what you have is the best principle of satisfaction.” Moses Matikho (Facebook)

“If both families agree, let it be made simple. This will reduce the backsliding rate of the youth,” Martin Mwangi Njoroge (Nairobi News comment page)

“As a [Christian] couple, we wanted to marry and live with dignity in order to avoid other temptations,” said Ann.

So the pair opted to have a low-key wedding ceremony in Nairobi without cakes, flowers or decorations.

The couple were simply dressed, wearing jeans, T-shirts and training shoes. Their only assets were two shiny steel circles that served as wedding rings.

During the wedding service, Wilson surprised the congregation by running out of the church to buy the two rings, Pastor Jasper Ojwach from the Community Christian worship centre in Nairobi told the BBC.

The groom was cheered when he produced them from his pocket just before the exchange of vows.

The couple say they are surprised by the positive reaction on social media to their frugal wedding and have urged other young Kenyans to follow their example.

“I believe money should not stop young people like us from getting married. If people love each other and want to marry they should,” Ann said.

So warm has been the reaction that the couple have received gifts from companies and individuals who were touched by their courage.

They are expected to go on their honeymoon soon, after a travel agency gave them a five-day break.