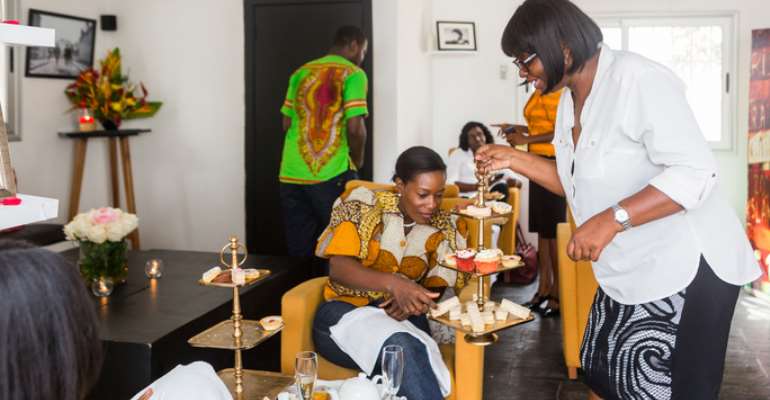 Sai Wine & Champagne Café, located at Labone recently marked this year's International Women's Day in a significant way when the Café shop hosted some women groups to an Afternoon Tea.

It brought together various women from all sectors including the corporate industry.

This afternoon tea consists of a selection of dainty sandwiches, scones served with clotted cream and preservers including cakes and pastries are also served.

Some of the women groups, who took the time to tour the Café shop, admired the architecture and serene environment.

Sai Wine & Champagne Cafe, is indeed a great place for friends to meet, relax and unwind, hold corporate meetings or simply just to drink some fine wine and champagne!

Sai wine & champagne cafè is open for business and a wonderful addition to Accra!

Sai sells nothing but wine and champagne from key wine producing countries throughout the world.

Alongside wines, they also have complimentary foods such as Cheese & cold meat platters, oysters, clams, pate, salmon, lumpfish roe that you can enjoy, with friends and family or on your own!

During the hours of four o'clock to five o'clock, the Duchess would be hungry and would ask for a tray of tea, bread and butter and cake to be brought to her in her room. This became a habit of hers and she began inviting friends to join her.

This pause for tea became a fashionable social event in the 1880's, upper class and society women would change in their long gowns, gloves and hats for their afternoon tea which was usually served in the drawing room between four and five o’clock.

Don't worry yourselves contributing Ghc100 to support Nation...
49 minutes ago