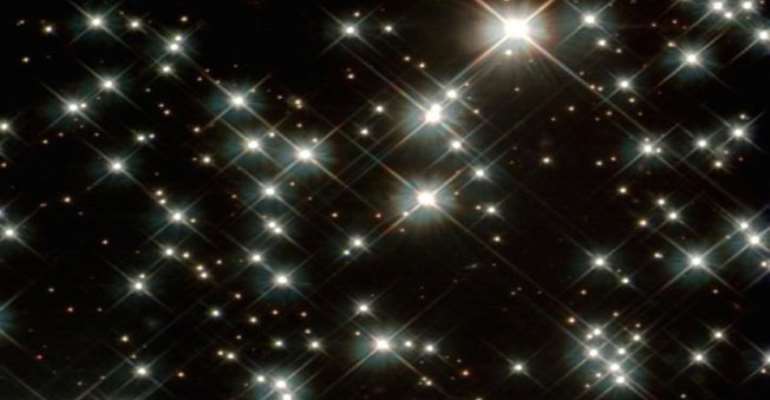 1. Every star you see in the night sky is bigger and brighter than our sun.

Of the 5,000 or so stars brighter than magnitude 6, only a handful of very faint stars are approximately the same size and brightness of our sun and the rest are all bigger and brighter. Of the 500 or so that are brighter than 4th magnitude (which includes essentially every star visible to the unaided eye from a urban location), all are intrinsically bigger and brighter than our sun, many by a large percentage. Of the brightest 50 stars visible to the human eye from Earth, the least intrinsically bright is Alpha Centauri, which is still more than 1.5 times more luminous than our sun, and cannot be easily seen from most of the Northern Hemisphere.

2. You can't see millions of stars on a dark night.

Despite what you may hear in TV commercials, poems and songs, you cannot see a million stars … anywhere. There simply are not enough close enough and bright enough. On a really exceptional night, with no Moon and far from any source of lights, a person with very good eyesight may be able to see 2000-2500 stars at any one time. (Counting even this small number still would be difficult.). So the next time you hear someone claim to have seen a million stars in the sky, just appreciate it as artistic license or exuberant exaggeration – because it isn't true!

3. Red hot and cool ice blue – NOT!
We are accustomed to referring to things that are red as hot and those that are blue as cool. This is not entirely unreasonable, since a red, glowing fireplace poker is hot and ice, especially in glaciers and polar regions, can have a bluish cast. But we say that only because our everyday experience is limited. In fact, heated objects change color as their temperature changes, and red represents the lowest temperature at which a heated object can glow in visible light. As it gets hotter, the color changes to white and ultimately to blue. So the red stars you see in the sky are the “coolest” (least hot), and the blue stars are the hottest!

4. Stars are black bodies.
A black body is an object that absorbs 100 percent of all electromagnetic radiation (that is, light, radio waves and so on) that falls on it. A common image here is that of a brick oven with the interior painted black and the only opening a small window. All light that shines through the window is absorbed by the interior of the oven and none is reflected outside the oven. It is a perfect absorber. As it turns out, this definition of being perfect absorbers suits stars very well! However, this just says that a blackbody absorbs all the radiant energy that hits it, but does not forbid it from re-emitting the energy. In the case of a star, it absorbs all radiation that falls on it, but it also radiates back into space much more than it absorbs. Thus a star is a black body that glows with great brilliance! (An even more perfect black body is a black hole, but of course, it appears truly black, and radiates no light.)

5. There are no green stars.
Although there are scattered claims for stars that appear green, including Beta Librae (Zuben Eschamali), most observers do not see green in any stars except as an optical effect from their telescopes, or else an idiosyncratic quirk of personal vision and contrast. Stars emit a spectrum (“rainbow”) of colors, including green, but the human eye-brain connection mixes the colors together in a manner that rarely if ever comes out green. One color can dominate the radiation, but within the range of wavelengths and intensities found in stars, greens get mixed with other colors, and the star appears white. For stars, the general colors are, from lower to higher temperatures, red, orange, yellow, white and blue. So as far as the human eye can tell, there are no green stars.

The sun in extreme ultraviolet, false color green. The human eye cannot see at this wavelength at all.

That being said, the sun is a “green” star, or more specifically, a green-blue star, whose peak wavelength lies clearly in the transition area on the spectrum between blue and green. This is not just an idle fact, but is important because the temperature of a star is related to the color of its most predominate wavelength of emission. (Whew!) In the sun's case, the surface temperature is about 5,800 K, or 500 nanometers, a green-blue. However, as indicated above, when the human eye factors in the other colors around it, the sun's apparent color comes out a white or even a yellowish white.

7. Our sun is a dwarf star.
We are accustomed to think of the sun as a “normal” star, and in many respects, it is. But did you know that it is a “dwarf” star? You may have heard of a “white dwarf,” but that is not a regular star at all, but the corpse of a dead star. Technically, as far as “normal” stars go (that is, astronomical objects that produce their own energy through sustained and stable hydrogen fusion), there are only “dwarfs,” “giants” and “supergiants.” The giants and supergiants represent the terminal (old age) stages of stars, but the vast majority of stars, those in the long, mature stage of evolution (Main Sequence) are all called “dwarfs.” There is quite a bit of range in size here, but they are all much smaller than the giants and supergiants. So technically, the sun is a dwarf star, sometimes called “Yellow Dwarf” in contradiction to the entry above!

8. Stars don't twinkle.
Stars appear to twinkle (“scintillate”), especially when they are near the horizon. One star, Sirius, twinkles, sparkles and flashes so much some times that people actually report it as a UFO. But in fact, the twinkling is not a property of the stars, but of Earth's turbulent atmosphere. As the light from a star passes through the atmosphere, especially when the star appears near the horizon, it must pass through many layers of often rapidly differing density. This has the effect of deflecting the light slightly as it were a ball in a pinball machine. The light eventually gets to your eyes, but every deflection causes it to change slightly in color and intensity. The result is “twinkling.” Above the Earth's atmosphere, stars do not twinkle.

On a good night, you can see about 19,000,000,000,000,000 miles, easily. That's 19 quadrillion miles, the approximate distance to the bright star Deneb in Cygnus. which is prominent in the evening skies of Fall and Winter. Deneb is bright enough to be seen virtually anywhere in the Northern hemisphere, and in fact from almost anywhere in the inhabited world. There is another star, Eta Carina, that is a little more than twice as far away, or about 44 quadrillion miles. But Eta Carina is faint, and not well placed for observers in most of the Northern hemisphere. Those are stars, but both the Andromeda Galaxy and the Triangulum Galaxy are also visible under certain conditions, and are roughly 15 and 18 quintillion miles away! (One quintillion is 10^18!)

10. Black holes don't suck.
Many writers frequently describe black holes as “sucking” in everything around them. And it is a common worry among the ill-informed that the so-far hypothetical “mini” black holes that may be produced by the Large Hadron Collider would suck in everything around them in an ever increasing vortex that would consume the Earth! “Say it ain't so, Joe!” Well, I am not Shoeless Joe Jackson, but it ain't so. In the case of the LHC, it isn't true for a number of reasons, but black holes in general do not “suck.”

This not just a semantic distinction, but one of process and consequence as well. The word “suck” via suction, as in the way vacuum cleaners work, is not how black holes attract matter. In a vacuum cleaner, the fan produces a partial vacuum (really, just a slightly lower pressure) at the floor end of the vacuum, and regular air pressure outside, being greater, pushes the air into it, carrying along loose dirt and dust.

In the case of black holes, there is no suction involved. Instead, matter is pulled into the black hole by a very strong gravitational attraction. In one way of visualizing it, it really is a bit like falling into a hole, but not like being hoovered into it. Gravity is a fundamental force of Nature, and all matter has it. When something is pulled into a black hole, the process is more like being pulled into like a fish being reeled in by an angler, rather than being pushed along like a rafter inexorably being dragged over a waterfall.

The difference may seem trivial, but from a physical standpoint it is fundamental.

So black holes don't suck, but they are very cool. Actually, they are cold. Very, very cold. But that's a story for another time.

Latest Photo Reports
Catch up with all the political quotes from our politicians.
Advertise here
More Opinion
ModernGhana Links
The third wave of covid-19 and its impact on kids – Is vaccination for kids the need of the hour?
Inoculation is the best way to get the world out of pandemic mode
Why Vaccination is crucial for all?
The Future of Education is Here- Online Education and e-Gurukuls at all levels- Kulpati
My life in a pandemic
A punctuation mark can cost your marriage
"My version of life"
Pay the price! Don’t be profane to miss the ultimate good!
Our Destinies Are Not Tied To The Situations In Which We Were Born
TOP STORIES

“Even those who lost elections are thanking people, what are...
16 minutes ago

Komenda Sugar factory 'collapsed' under Mahama; if not, why ...
16 minutes ago