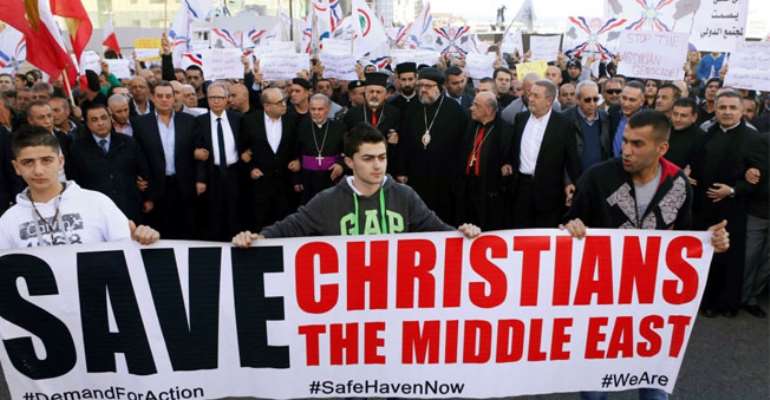 Assyrians hold banners as they march in solidarity with the Assyrians abducted by Islamic State fighters in Syria earlier this week, in Beirut, Labanon, February 28, 2015. Militants in northeast Syria are now estimated to have abducted at least 220 Assyrian Christians this week, a group monitoring the war reported.

Two of the 200-plus Assyrian hostages kidnapped by the Islamic State during an assault on Christian villages along Syria's Khabur River in February have provided insight into their abduction in recent interviews where one revealed that the ISIS militants tried to force the Christian hostages to convert to Islam, but the captives boldly refused.

On Feb. 23, the terrorist group raided approximately 35 different Christian villages in the Hasakah province and abducted somewhere between 263 to 373 men, women and children, according to the Assyrian International News Agency. But about a week after the raids, ISIS released a handful of hostages  on March 1.

A released hostage going by the name of “Robert” told AINA  that he was abducted from his village of Tel Goran, which is on the south bank of the Khabur River, along with 16 other men and four women. He recalls the militants storming into his village at around 5 a.m., knocking on all the doors and waking everybody up.

He explained that the terrorists corralled everybody who was left in the village and placed them all into a small room, where they waited until the fighting subsided between the ISIS fighters and the Kurdish forces, who were stationed on the north side of the river.

Robert further explained that the fighting subsided about three hours after being placed in the room, and said the militants got upset when the local church's bell rang in the quiet of the night. Then, the Assyrian captives were transported to the Abdul Aziz Mountain, where they were placed into two rooms and spent the night.

While staying at the mountain, Robert recalls that the first thing the militants did was demand that the hostages convert to Islam.

“They asked us to convert to Islam. … Yes, that was their

When asked about how many militants had spoken to them about conversion, Robert replied, “very many, everyone spoke to us who saw us.”

After spending the night in the house at Abdul Aziz Mountain, Robert said he and the rest of the hostages were driven about four hours north in the mountains. When they arrived, the hostages were placed into two different homes where they remained for five days until they were released.

Although they were in a new location, the militants' goal was still to get the hostages to convert to Islam.

Although the hostages were told they would have to pay, Robert said the militants uncharacteristically released them without forcing them to pay the tax.

“They said this time they would not collect the jizya because we had not fought against them. They said that they would release use on one condition — that we not return to our village,” Robert added. “They said if we returned and they captured us again they would kill us without any other option; they would behead the men and enslave the women.”

Even though the ISIS fighters continuously tried to get the Christians to convert, Robert said he and the rest of the hostages were not roughed up or cruelly treated and were even given everything they needed.

“We were provided with all necessities — food, water, bathing facilities. They brought us everything,” Robert asserted.

Another released hostage from Tel Goran, going by the name “Peter,” told The Times  he and the other hostages were tried in Shariah court, but it was ruled that they were non-combatants. The Times reports that a Sunni tribal leader helped negotiate their release.

Graeme Wood, a writer with The Atlantic who covers the Islamic State, told CNN that ISIS' willingness to release the hostages by order of Shariah courts is an attempt to build more religious credibility.

“ISIS has claimed for a long time to follow rules, and it claims that these Shariah courts will impose limits,” Wood said. “They can attempt to get credibility by showing that they follow rules and that they have some kind of transparent process that follows their particular implementation of Shariah law.”

Robert added that upon release, ISIS hired a car to take the hostages to the town of Hasakah, where other Christians from the region have taken refuge in a church.

As ISIS has seized many of the region's villages, Robert said he and many other Assyrians in the region are planning to flee to Lebanon.

ISIS' control of the region gives the group access to a key bridge that crosses the Khabur River.

Even though Robert, Peter and the rest of the hostages they were with from Tel Goran were released, over 200 Assyrians remain in ISIS captivity after more than two weeks. Other reports  have indicated that ISIS may have executed 15 other Christian hostages.