Tuberculosis can cause hunchback, immunise your baby 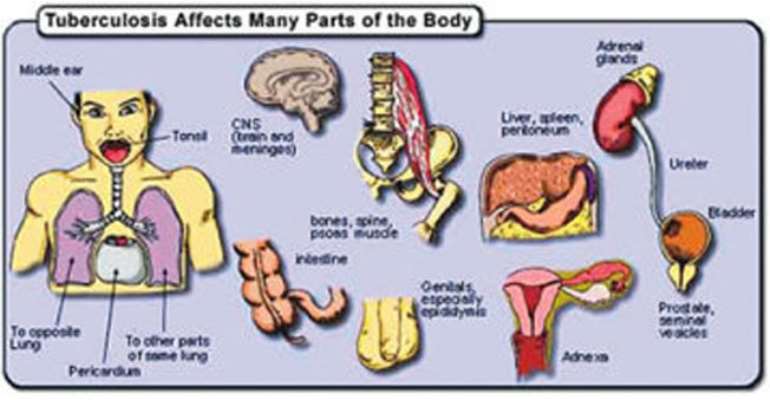 When people see a child who has hunchback, the tendency is to conclude that he was either bewitched or born with it. But experts are saying neither of these thoughts is true, as a child might develop hunchback due to the complications of tuberculosis.

While the world is grateful that tuberculosis has been brought under control remarkably and it no longer kills, there are still concerns that carelessness on the part of care givers or neglect by parents to get age-appropriate immunisations as at when due might expose a child to it.

In Asia and Africa, tuberculosis remains one of the major childhood diseases, and the World Health Organisation estimates that one million children contract TB annually, while another estimated 400,000 of them die from it.

TB, a deadly infection
The recent case of a nursery worker at the Providence Memorial Hospital in El Paso, Texas, United States of America, calls for concern. The nurse's assistant had tested positive to symptoms of this highly infectious disease, but the authorities had neglected to release her to go take care of herself and thus save her patients the trauma of a debilitating disease.

Before anyone knew what was going on, eight of the infants she was caring for in the hospital had been infected, while there are fears that about 860 infants are possibly exposed.

What this translates into is that when it comes to infectious diseases, you can't be too careful!

TB and infants
Specialist in TB at the Department of Medicine, Obafemi Awolowo University, Ile-Ife, Osun State, Dr. Greg Erhabor, says this disease affects children differently than adults. He warns that for one, the infection is a lot difficult to diagnose in children because it rarely presents with symptoms.

“This disease most commonly affects the lungs and is transmitted from person to person via droplets from the throat and lungs of people with the active respiratory disease,” Erhabor notes.

Describing its manifestation among adults, Erhabor says, “The symptoms of active TB of the lungs are coughing, sometimes with sputum or blood, chest pains, weakness, weight loss, fever and night sweats.”

Indeed, experts at the online portal, kidshealth.org, aver that “in older infants and children, latent tuberculosis infection, which is the first infection with the tuberculosis bacteria, usually produces no signs or symptoms. In addition, a chest X-ray shows no signs of infection.” That's how dangerous this infection could be to kids.

Erhabor says only a tuberculin skin test or TB blood test could be used to determine whether or not a child has been infected.

“TB skin testing is considered safe in children, and is preferred over TB blood tests for children that are less than five years of age,” the specialist explains.

Physicians add that a primary infection usually resolves on its own as a child develops immunity between six- and 10-week period; but that in the case of “progressive tuberculosis,” the infection can progress and spread all over the lungs or to other organs.

When this happens, the victim may develop such symptoms as fever, weight loss, fatigue, loss of appetite, and cough.

Erhabor laments that though tuberculosis is treatable with a six-month course of antibiotics, delayed presentation and diagnosis, which are commonly associated with death, are some of the major problems that health care providers face.

Hunchback effect
In a PowerPoint presentation during a health week programme at the Obafemi Awolowo University, Erhabor shows that latent, undetected or untreated tuberculosis can progress into hunchback in an affected child.

General Physician, Dr. Ola David, says hunchback, medically known as kyphosis, could develop in a child as a result of myriad other health problems, which may include bad posture or a structural problem with the spine — especially when the spine doesn't develop normally in the womb.

David warns that if the condition is left untreated, it may result in complications such as breathing difficulties or urinary incontinence; while the victim may also feel extreme tiredness and lack of energy for the better part of the time.

The experts agree that though tuberculosis is a bacterial infection that mainly affects the lungs, it can sometimes spread, causing havoc all the way. The havoc includes possible development of hunchback by a young, infected child.

Consultant pulmonologist, Dr. Olayemi Awopeju, warns, “When TB spreads into the bones, it can result in spinal pain and gradually progress to joint destruction. In many cases, the ribs are affected; and in children, it can result in hunchback.”

Immunise your child
So far, and as far as the civilised world is concerned, the only way to prevent your child from becoming a victim of this terrible disease is to vaccinate him when there's still windows of opportunity for prevention.

David notes that the vaccine, Bacille Calmette-Guérin, otherwise known as the BCG, is the only approved vaccine for babies.

“The main use of BCG is for vaccination against tuberculosis; and it can be implemented after the birth intradermally. The BCG vaccination is recommended for all babies up to one year old who are born in areas where the rates of tuberculosis are high — and this includes Nigeria.