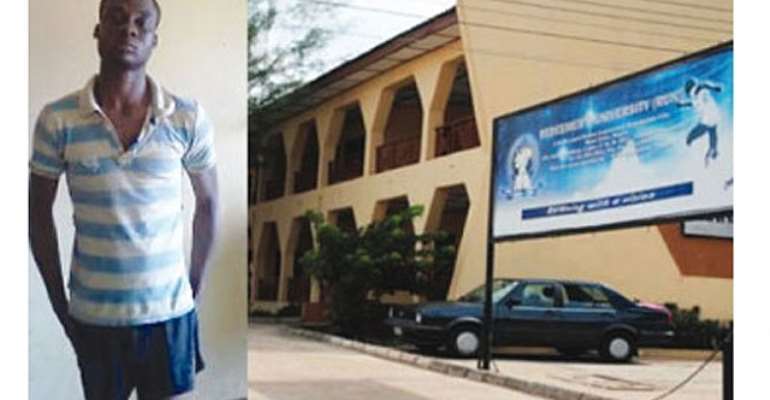 The 21-year-old student of the Redeemer's University, Ogun State, Tolani Ajayi , who murdered his father, has been arraigned before a Chief Magistrate's Court in Owode Egba, Obafemi Owode Local Government Area.

Tolani, who had been earlier arrested by the police for killing his father, Charles Ajayi, a Senior Advocate of Nigeria, on July 3, 2014, was taken to court on Tuesday. He was arraigned around 9.58am on one count of murder.

PUNCH METRO   had reported that the 300- Level History and International Relations student of the university stabbed his father to death in their residence on Canaanland Street, Redemption Camp, on the Lagos-Ibadan Expressway, Ogun State, on the fateful day at about 1am.

Tolani was said to have stabbed his father with a knife and later butchered him with a cutlass after an altercation that ensued between them for his refusal to participate in a prayersession.

PUNCH Metro   reported that Tolani afterwards allegedly packed his father's remains in a box and dragged them into the bush within the camp.

The state Police Public Relations Officer, Mr. Muyiwa Adejobi, a Deputy Superintendent of Police, had said the police later recovered the remains of the 60-year-old lawyer in a bush along Canaanland Street.

But Tolani had told our correspondent that his father provoked him, adding that there was an argument between him and his father.

He had said, “My father went to the kitchen and got a stick (wooden spoon) which he used on me repeatedly and I tried to defend myself. Then, he bit me on the shoulder and I got angry.

“I initially used a normal small kitchen knife. Later, I used cutlass to attack him.”

The prosecution counsel, Sergeant Evidence Onyekachi, told the court that the suspect's action was contrary to Section 316 and punishable under Section 319 (1) of the Criminal Law of Ogun State of Nigeria, 2006.

Tolani's plea was not taken as the defence counsel was absent in court.

The chief magistrate, Mr. Bolaji Ojikutu, ordered that the accused be remanded in custody pending the advice from the Director of Public Prosecutions

She subsequently adjourned the case till October 10, 2014 for DPP advice.

Fuel price hikes: When did you realise you don't control oil...
6 minutes ago