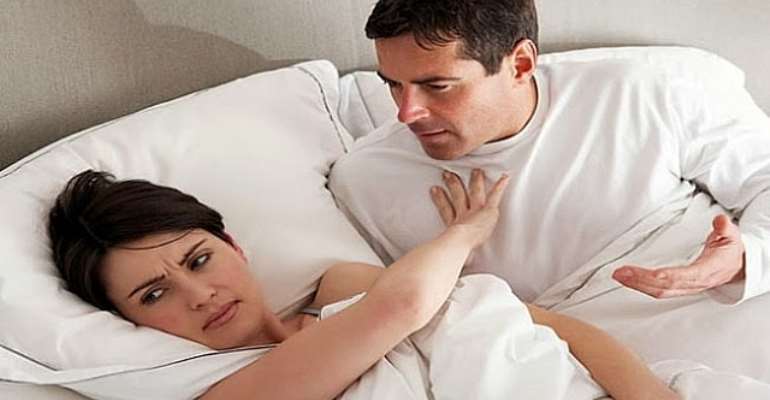 A Headache in the Bedroom Might Be a Real Excuse After All-What's the number one clichéd excuse when it comes to putting off your partner in the bedroom?

“Not tonight, honey, I have a headache!,”  right?
Heck, there are even pillows with the sentiment cheerfully embroidered across their soft fronts.

But is it always an excuse?
Or could headaches in the bedroom point to a deeper problem?

Image via TreasuresShop /Etsy
According to a study by Loyola University Medical Center, about 1% of people report having headaches associated with sexual activity, but researchers suspect that the actual incidence is much, much higher.

Because after all, who really wants to admit that getting intimate gives them a headache?

“Many people who experience headaches during sexual activity are too embarrassed to tell their physicians, and doctors often don't ask,” said Dr. Jose Biller, chair of Loyola's Department of Neurology. But he maintains that headaches that occur during intimacy are actually very real medical occurrences, first noted by the great Hippocrates way back when in the birthplace of medicine. And when you think about it, it makes sense, with all that blood flow being seriously re-directed when you are getting your romance on. In fact, because sex is classified as a form of exercise, the headaches can occur for a variety of different reasons, such as:

A benign cause, meaning doctors don't really know why they occur.

Interestingly enough, men are actually three times more likely than woman to experience a “sex headache” and as you can probably guess, even more likely to avoid the issue or not seek treatment. The study found that three main types of headaches occurred before, during, and intimacy:

The dull ache . Occurs in the head and neck that begins before orgasm, and gets worse during foreplay and the sexual act. Similar to a tension headache.

The climax headache . An intensely painful headache that begins during orgasm and can last for hours. Dubbed a “thunderclap headache,” one patient described it as someone hitting his head with a hammer.

The after-hours headache . A headache that occurs after the act of intimacy and can range from mild to extremely painful. The headache gets worse when the patient stands, and lessens when the person lies back down. This headache is caused by an internal leak of spinal fluid, which extends down from the skull into the spine. When there's a leak in the fluid, the brain sags downward when the patient stands, causing pain. Um, ouch?

Bottom line?
Headaches aren't always a laughing matter in the bedroom. If you or your partner are experiencing headaches during intimacy, don't be embarrassed to seek help or wonder if something is wrong with you. They can be real medical occurrences and are very treatable with certain medications, counseling, and exercise.