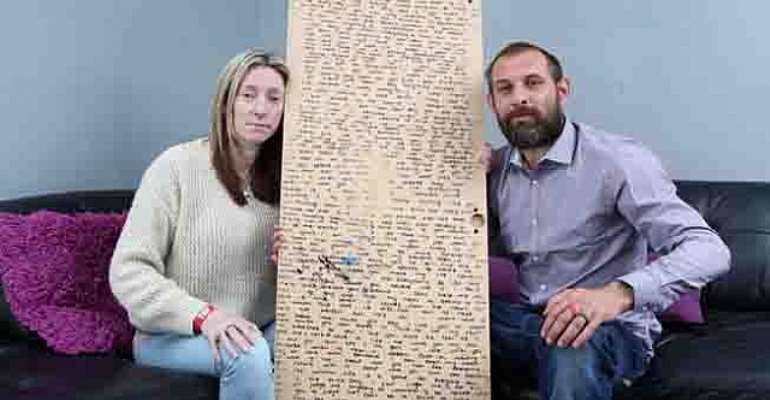 The father of a 12-year-old girl who lost her battle with cancer last week says he was shocked to find she had left behind a long, handwritten message on the back of a mirror.

'It was a stand-up mirror in her room, and it was always lent up against the wall so we never saw behind it,' Dean Orchard, of Leicester, England, told the Leicester Mercury. 'She never mentioned it, but it's the kind of thing she'd do.'

Athena Orchard was diagnosed with cancer in December after discovering a lump on her head and collapsing in her home. She died on May 28.

'She was a very spiritual person, she'd go on about stuff that I could never understand  she was so clever,' Dean recalled.

Dean was moving things around in Athena's room when he discovered the message.

Here are just some of them:
Happiness depends upon ourselves.
Maybe it's not about the happy ending, maybe it's about the story.

The purpose of life is a life of purpose.
The difference between ordinary and extraordinary is that little extra. Happiness is a direction, not a destination.

Thank you for existing. Be happy, be free, believe, forever young.

You know my name, not my story.
You have heard what I've done, but not what I've been through.

Love is like glass, looks so lovely, but it's easy to shatter.

Love is rare, life is strange, nothing lasts and people change.

Life is only bad if you make it bad.
Remember that life is full of ups and downs, without the downs the ups don't mean anything.

I'm waiting to fall in love with someone I can open my heart to.

Life is a game for everyone, but love is the only prize.

'When I first saw it, it just blew me away,' Dean Orchard said. 'I started reading it but before long I had to stop because it was too much  it was heartbreaking.'

The message, written in marker, also makes reference to her cancer diagnosis:

Athena's funeral is scheduled for June 12.
'She was the bravest person I know,' her mother, Caroline, told the paper. 'She was always trying to make sure other people were OK before worrying about herself. She was always being positive.'

More Family & Parenting
Modern Ghana Links
'May You Be The Mother Of Many Sons...'
Do Your Children Know Their Vagina Or Penis By Its Name?
Majority Of Young Adults Now Live With Parents Amid Pandemic
Moving Away
Early Marriage And Social Betterment
How Quitting Smoking Can Make Fathers The Real Heroes Of Their Children!
The Ninani Group Recognizes The Contributions Of Fathers With Gifts On Father's Day
Would Your Child Benefit From Home Tuition?
How To Save Your Husband From The Hands Of Side Chicks
Dossiers Quotes Coronavirus
TOP STORIES