5 things people are afraid to tell you about marriage 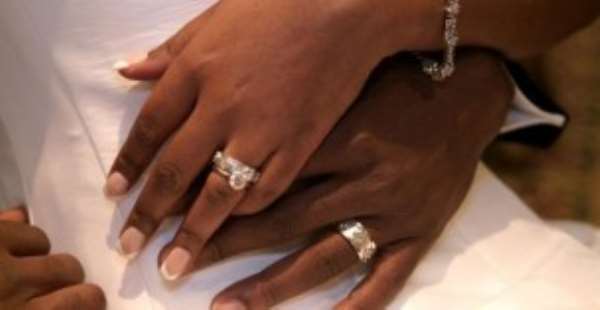 You're engaged. One-hundred-and-thirty-one likes and 21 Facebook comments later, everyone has built you up to believe that you are about to embark on the most magical, exciting time of your life. How did you get so lucky? Man, people should be really jealous of you.

Cut to three months later.
You're beginning to realize this process isn't all its chalked up to be. You start scrolling through your iPhone to find people you can vent to. You are dealing with divorced parents and money issues, and somehow the 131 people on Facebook have all disappeared. No one is answering… which leads me to the first thing people are afraid to tell you about getting married:

1. No one cares about your wedding as much as you do.

I know it's harsh, but if you can wrap your head around this little factoid from the beginning you will be better prepared for some letdowns to come.

You are the only person who is constantly thinking about your wedding. Everyone else has their own lives to worry about. They have jobs, families, and work as well. So while the wedding is at the forefront of your mind, it's in the back of theirs.

Expect to be let down, for people to not call you back, or to not show up when they say they will. If you go in with this mindset, the letdowns won't feel so major. You'll realize it's not you, it's just the nature of the beast. They have lives too. And you can't fault them for that — which leads me to…

2. Being a bride doesn't give you the right to be a straight up biatch.

It's like the world knows you are planning a wedding and really likes to kick you when you're down. It's easy to take your aggravation out on other people, but try not to.

It's not just your day. It's your fiancÃ©'s day too. And don't forget your parents, friends, and family who've shelled out a lot of cash to be there and make this day possible.

So when you feel like you are about to snap, just picture a film crew around you and smile on the outside and cuss on the inside.

First and foremost, before you make any plans, take a long hard look at the kind of person you are financially. Are you the type of person who is okay with spending your savings of the past year on a party? Or are you the type who will look back and wish you had put that money toward a house?

Be honest with yourself. Don't be influenced by what other people say you should do or be pressured to have a wedding you don't want to have. Go to the courthouse and take a once-in-a-lifetime trip instead. Be real and upfront with yourself from the beginning. You'll be left without a major bill, and most importantly, regrets.

This is crucial to your mental and financial well being, even if it is derived from a rap song.

4. Everyone else is eating on your tab, so you probably should, too.

I hate when I hear brides say, 'Well I didn't really drink that much or have that much fun. I was too busy saying hello to everyone throughout the night.'

This is the one night of your life where you are given a gift to travel back in time and eat with all of your friends and family. Basically it's like going back to college, which is the greatest gift one can ever give.

Take advantage of it. Be in the moment. Forget about the part where the cake didn't turn out right and the napkins were peach and not rose. Have a drink. Let loose and have fun with your new husband. You guys set the tone. If you guys are having a blast, then everyone else is sure to have one as well. And lastly…

5. Don't lose sight of what the whole shebang is about.

It's easy to get caught up in the budgets, programs, and seating charts. But don't forget what it's all about. You've found someone to kick it with for the rest of your life. And that isn't a simple feat.

But if you think you're ready to take the leap, then do it. Drink, dance your a*s off, and pause for three seconds that night to just take everything in. Time can stop if you let it.

Police smoke out Shatta Wale, handcuff him for faking gun at...
19 minutes ago