Nagging: Is it a women's affair? 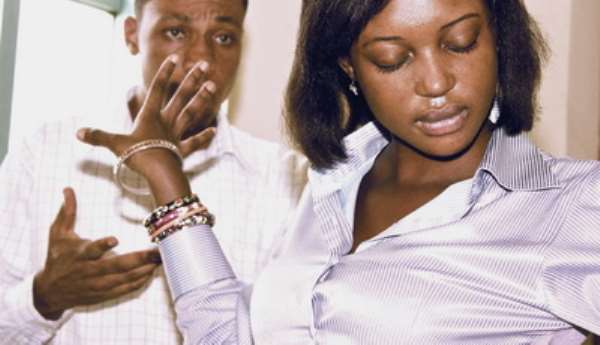 Nagging, in communication, is a repetitious behaviour in the form of pestering, hectoring or otherwise continuously urging an individual to complete previously discussed requests or act on advice.

A common factor and by far the most universal cause that triggers nagging is said to be the unhealthy habits of a spouse.

According to marriage counsellors, nagging is prompted when a partner feels that his or her valid claims, said or unsaid, have not been responded to adequately.

When the honeymoon lights fade, they are replaced by sunlight; when the candlelight flickers, the fluorescent bulbs are switched on, and the glare reveals the not-so-perfect imperfections of one's partner.

Nagging begins in an effort to perfect one's partner. Primarily in the mind, but slowly it finds a voice. Nagging is experienced in every household where one partner tries to dominate the other subconsciously, or while trying to get a point across.

Nagging by spouses is a frequent marital complaint. According to psychotherapists, individuals who nag are often "weak, insecure, and fearful. Their nagging disguises a basic feeling of weakness and provides an illusion of power and superiority".

Nagging can be found between both male and female spouses, though usually over different subjects, according to psychologists, husbands' nagging usually involve finding "fault with their dinner, with the household bills and with the children", along with "carrying home the worries of their work'.

According to him, men and women nag but the degree was what made the difference.

To him, nagging had become an issue in marriages because 'men have not appreciated the psychology of women and vice versa'.

'Every human being is a contrasting character and we do not appreciate each other's psychology' so, according to him, until the awareness was created before people marry, the issue of one person nagging the other would always come up.

He has, therefore, called on parents to train their children during their teenage years to understand and also appreciate the opposite sex and added that this would help them manage the issue of nagging better in their relationships in the future.

Mabel, a working mother says, "women take on the lion's share of nagging". She said because many women found it difficult to directly communicate their needs, they fell into the fatal trap of whining and nagging about what they were not getting rather than directly stating what they wanted, needed, or expected from their partners. Unfortunately, she says, whining and nagging do not put a man into a giving mood, thus, a vicious cycle is born.

Although she was quick to add that men also nag, to her the more a woman nagged, the less likely the man would be responsive to her wishes.

To Mabel, nagging kills relationships, 'it puts your man off', making it difficult for easy communication to take place.

Nagging is sometimes unproductive; psychologically, nagging can act to reinforce behaviour as a study by the University of Florida found. The main factors that led a person to nag were differences in "gender, social distance, and social status and power", the study stated.

Continuous nagging, according to relationship experts, makes one spouse resentful and defensive and remove him or herself from the one nagging, physically and emotionally. To experts, nagging is detrimental to relationships, as it distances one from the other.

Nagging, according to marriage experts, promotes negative and destructive emotions such as disapproval, condemnation, censure, anger, irritation, physical and emotional agitation in both partners.