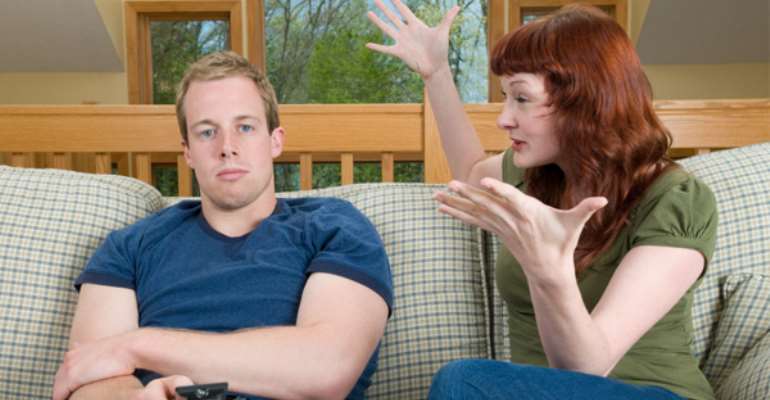 While many look at women as the ones who like to nitpick, men do have their nitpicky moments, too. Too much makeup, talking about bodily functions, and belittling the opposite sex are just a few of the female habits that men find unattractive about women.

We know that not all women are like this, but when we meet them, boy do we know about it. Here are some of things men find unattractive in women but would probably not tell them.

• The Thirst: You can find these women at every open bar, every week in search of Mr. Right. We know you're thirsty because the event is an after work event yet you found time to travel home to put on your freakum dress and 5 inch heels.

Thirsty women are at the bar with the “hawk eye”, giving the appearance of the mean chick. But she's not mean but desperate and the desperation is unattractive.

• Bad Hair: Can we talk about that funky smelling weave with the tracks showing because that's not a good look. Or my natural sisters who think dry and flaky is the new it do. We ain't feeling you neither. I'm not asking you to apply all types of chemicals, or pay huge sums of money for a lace front. I just want you to look presentable for yourself not for me.

• Unkept Private Areas: Please shave under your arms because that hair brings funk. This brings me to your next private area — the vajayjay. I need you to trim up a little. Give yourself an edge up so your privates resemble a well manicured lawn rather than a jungle safari.

• Angry for no damn reason: Some of y'all are taking this feminism thing too far — you're lashing out at men every chance you get and we're tired of it. No but seriously, no one likes the woman who's always angry, never smiles and is extremely difficult to be around. It's unattractive.

• Clothes: Every day, my eyes are visually assaulted because some women think that a kangaroo pouch is what's hot in the streets. It's not. Know your body type and dress accordingly. Women who can't dress are not attractive. Before I see your mind, I see your outfit, let's try to make one compliment the other.

• Unkept feet and nails: Simply put, a manicure/pedicure is your friend so you no longer scratch my legs in bed. I don't have to remind you that biting your nails looks terrible. Chipped nail polish and ashy feet will not be flying either.

• Sense of Entitlement: Ladies, have you ever hung out with one of your friends who feels the need to tell you, the men you're hanging with and anyone within an earshot how she never has to pay for drinks. I always wonder, does she have any money to pay for the drinks she likes to gulp down?

Or the women, who are eager to go out, even suggest it but they think the guy should pay for everything. Listen, chivalry is not dead but women who act as though they are entitled to a man's wallet got to go. It's unattractive and it's downright classless.

• Curses like a sailor: If I can't bring you home to momma we can't roll. I can't stand a woman who every word out her mouth is a swear word. Once again, have a cup of class and act like a lady not a garbage man.

• Promiscuity: If your reputation for “getting it popin” enters the room before you do, that might not be a good look. You're sleeping with every Tom, Dick and Harry and that's cool but don't expect me to think it's sexy.

• Ms. Know It All: I don't even have words to describe this one because she probably wants to describe it herself. Seriously, this woman can't take a piece of advice or fact that she didn't come up with to save her life.

• Attention Hordes: She usually has the attention of most of the guys, but if there's one focusing on one of her friends, she makes it a point to hook that guy too. “Oh you got a nice chest. Do you work out?” Meanwhile, the dude ain't got a six-pack, he's got a loaf of bread.

• Liars: You can just tell this woman is lying. And often times it's about something she doesn't have to lie about. She got a hating friend who tells you all her business, especially about how she buys fake designer shoes.

• Excessively Drunk Women: When I was a boy I thought a group of drunk women was the move. When I go to the club now and see a chick throwing up in the bathroom, I get repulsed.

• All the way turned up: Why I can hear you in a club on any night is a problem. It's loud, there's loud music, and still I can hear your voice shrieking over the speakers. Or what about those women who can't control their volume when they are drunk and try and talk in your ear but they're screaming?

• Negative Women: These women think everything is wack.

• Impatience: They hate waiting. They are the type to tell you to let them know when you have arrived at the restaurant so they can leave their house. They have cavities on each side of their mouth from sucking their teeth so much.

• Posture: No one wants a woman all slouched over looking sloppy. You can do it put your back into it. Peace and love ladies, I think you're beautiful. I hope you enjoy your weekend and in no way was I trying to offend but a dose of keeping it real is always healthy.

One wife one man is not in the Bible, every man will marry 5...
13 minutes ago