Are high heels really worth it? 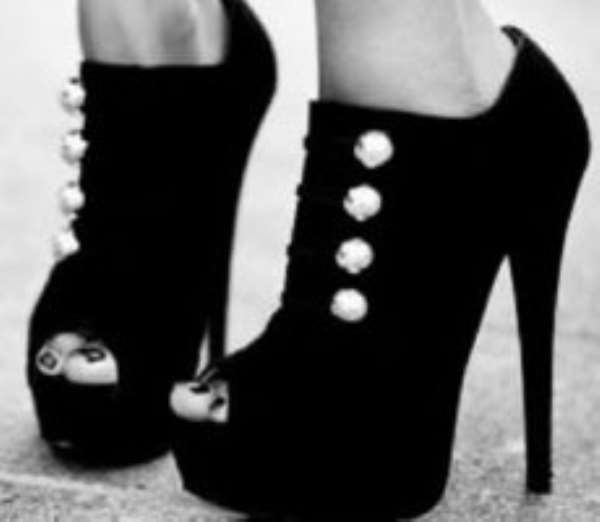 Women's 'no pain no gain' attitude to shoes is putting them at risk of permanent foot injury, medical experts have warned.

A study has shown that stylish high heeled shoes cause women pain after just an hour and six minutes and that just under half admit to putting up with the rubbing or pinching to look good.

The research also discovered a staggering nine in ten women have experienced problems with their feet and 20 per cent say they are 'embarrassed' by them after years of forcing them into high heels.

The poll, carried out by the College of Podiatry, found that a third of women admitted to having worn heels they knew did not fit, simply because they 'looked nice' and could not find a pair in their size.

But consultant podiatrist Mike O'Neill, from the College of Podiatry, warned that squeezing feet into smaller shoes can cause long-term damage including arthritis, stress fractures, and trapped nerves, which may even require surgery or steroid injections.

Mr O'Neill said: 'There's absolutely no doubt women who wear high heels are putting themselves at risk of permanent injury in the name of fashion. Given a choice between a stylish pair of shoes or nice feet, many will go for the stylish shoes.

'However, the higher the heel, the more they tilt your body forward and the more you have to lean back to compensate. This can put your pelvis out of alignment and cause compression of the spine.

'High heels ram your foot forward, which squishes your toes together and can cause ingrown toe nails, rough areas of skin, blemishes, and calluses.

'And because your toes are squashed, the moisture gets trapped, causing soggy toes, which is a breeding ground for athlete's foot.'

According to the study of 2,000 British people, high heels start to hurt after 1 hour, 6 minutes and 48 seconds, the study found. But a fifth of women said they start to feel pain within just 10 minutes.

One in four have danced bare foot in a club or bar when they could not put up with the pain any longer and a third have been forced to remove their shoes and walk home barefoot because of the discomfort.

Mr O'Neill added: 'Shoes make you walk on the balls of your feet can cause aches and pains, and ultimately, stress fractures.

'They also cause increased wear and tear in the joints and soft tissue, which can cause arthritis.

'Some women also suffer from trapped nerves, which may require surgery or steroid injections to combat the pain.

'Wearing high heels shortens the Achilles tendon dramatically, which causes incredible aches when you then try to wear flats.

'Any shoes with a heel higher than two inches are a concern. If women want the extra height, they would be better off wearing stacks [such as platforms or wedges].'

The study also discovered that while women typically own 17 pair of shoes, men own just eight.

Twice as many women as men report suffering from corns, cracked heels and bunions.

yet despite these problems, 20 per cent of women refused to seek medical help because they believed their foot complaint was not important.

Finally, results showed that younger women are doing themselves the most harm.The study found that the younger the woman, the higher their heels.