Your brain on music 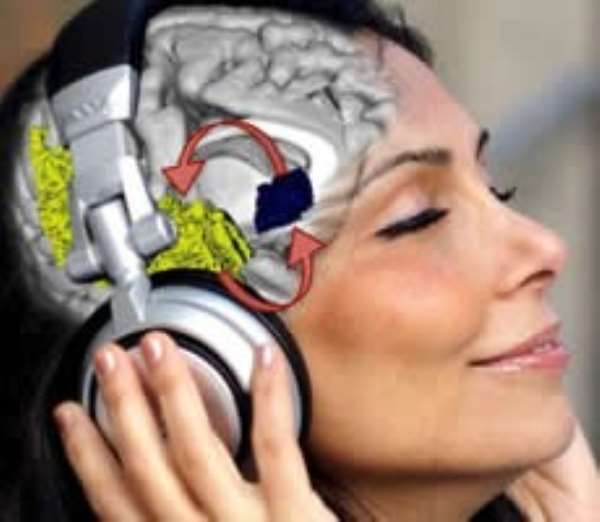 Whether you are rocking out to Macklemore & Ryan Lewis in your car or reading with Bach in your bedroom, music has a special ability to pump us up or calm us down.

Scientists are still trying to figure out what's going on in our brains when we listen to music and how it produces such potent effects on the psyche.

Three studies published this month explore how the brain responds to music. The quest to dissect exactly what chemical processes occur when we put our headphones on is far from over, but scientists have come across some clues.

Health benefits of music
Listening to music feels good, but can that translate into physiological benefit? Levitin and colleagues published a meta-analysis of 400 studies in the journal Trends in Cognitive Sciences, suggesting the answer is yes.

In one study reviewed, researchers studied patients who were about to undergo surgery. Participants were randomly assigned to either listen to music or take anti-anxiety drugs. Scientists tracked patient's ratings of their own anxiety, as well as the levels of the stress hormone cortisol.

The results: The patients who listened to music had less anxiety and lower cortisol than people who took drugs. Levitin cautioned that this is only one study, and more research needs to be done to confirm the results, but it points toward a powerful medicinal use for music.

"The promise here is that music is arguably less expensive than drugs, and it's easier on the body and it doesn't have side effects," Levitin said.

Levitin and colleagues also highlighted evidence that music is associated with immunoglobin A, an antibody linked to immunity, as well as higher counts of cells that fight germs and bacteria.

What music we like
So music is good for us, but how do we judge what music is pleasurable? A study published in the journal Science suggests that patterns of brain activity can indicate whether a person likes what he or she is hearing.

Valorie Salimpoor, a researcher at the Rotman Research Institute in Toronto and former Levitin student, led a study in which participants listened to 60 excerpts of music they had never heard before while in a functional magnetic resonance imaging (fMRI) machine.

The 19 participants were asked to indicate how much money they would spend on a given song when listening to the excerpts, while also allowing researchers to analyze patterns of brain activity through the fMRI. Such a small number of participants is common in an fMRI study for reasons of complexity and cost, although it suggests more research should be done.

The study authors highlight in their results a brain area called the nucleus accumbens, which is involved in forming expectations.

"There is actually a network of activity that predicts whether or not you're going to buy this music as you're listening to the music," Salimpoor said.

The more activity in the nucleus accumbens, the more money people said they were willing to spend on any particular song in the "auction" set-up that the researchers designed.

"This was an indicator that some sort of reward-related expectations were met or surpassed," she said.

The superior temporal gyrus alone doesn't predict whether a person likes a given piece of music, but it's involved in storing templates from what you've heard before. For instance, a person who has heard a lot of jazz before is more likely to appreciate a given piece of jazz music than someone with a lot less experience.

"The brain kind of works like a music recommendation system," Salimpoor said.

You can listen to the clips that the researchers used in the study here.

Levitin called the findings "interesting," but views it as a refinement of what other laboratories have found in the past. He and Vinod Menon at Stanford University were the first to show the role of the nucleus accumbens in music in 2005.

Are we all hearing the same thing?
It seems intuitive that different people, based on their personalities, preferences and personal histories of listening to particular music, will have different experiences when exposed to a particular piece of music. Their attention to various details will vary and they might like different things about it.

But Levitin and his collaborators showed in a European Journal of Neuroscience study that, from the perspective of the brain, there may be more similarities among music listeners than you think.

"Despite our idiosyncrasies in listening, the brain experiences music in a very consistent fashion across subjects," said Daniel Abrams, lead author and postdoctoral researcher at Stanford University School of Medicine.

Seventeen participants who had little or no music training took part in this study which, like Salimpoor's, is small, but typical for an fMRI study.

Participants listened to four symphonies by composer William Boyce of the late Baroque period, which the researchers chose because they reflect Western music but were likely to be unfamiliar to subjects.

Among participants, the researchers found synchronization in several key brain areas, and similar brain activity patterns in different people who listen to the same music. This suggests that the participants not only perceive the music the same way, but, despite whatever personal differences they brought to the table, there's a level on which they share a common experience.

Brain regions involved in movement, attention, planning and memory consistently showed activation when participants listened to music -- these are structures that don't have to do with auditory processing itself. This means that when we experience of music, a lot of other things are going on beyond merely processing sound, Abrams said.

One resulting theory is that these brain areas are involved in holding particular parts of a song, such as the melody, in the mind while the rest of the piece of music plays on, Abrams said.

The results also reflect the power of music to unite people, Levitin said.

"It's not our natural tendency to thrust ourselves into a crowd of 20,000 people, but for a Muse concert or a Radiohead concert we'll do it," Levitin said. "There's this unifying force that comes from the music, and we don't get that from other things."

Further research might compare how individuals with healthy brains differ in their musical listening compared to people with autism or other brain disorders, Abrams said.

"The methods that we've used can be applied to understand how the brain tracks auditory information over time," Abrams said.

What's next
The next frontier in the neuroscience of music is to look more carefully at which chemicals in the brain are involved in music listening and performing, Levitin said, and in which parts of the brain are they active.

Any given neurochemical can have different function depending on its area of the brain, he said. For instance, dopamine helps increase attention in the frontal lobes, but in the limbic system it is associated with pleasure.

By using music as a window into the function of a healthy brain, researchers may gain insights into a slew of neurological and psychiatric problems, he said.

"Knowing better how the brain is organized, how it functions, what chemical messengers are working and how they're working -- that will allow us to formulate treatments for people with brain injury, or to combat diseases or disorders or even psychiatric problems," Levitin said.