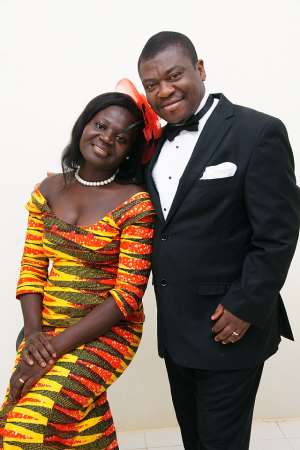 Every wedding or marriage ceremony that I attend be it a Muslim, Christian, customary or whatever religious marriage, there is always two sections that I enjoy most.


The two sections are the counseling section where both the bride and the bridegroom receive advice from members of both parties witnessing the ceremony and the very section where the husband is asked to tell how he met his sweetheart.


Forget about the decorations, the attendance, music and dance, the motorcade and the siren's that greets the ceremony and the shouts of “doon, doon” actually meaning,” you do not know O” by witnesses who stand by the road to cheer the just wedded couple up and pay attention to these two sections.


Several powerful men of God who have in-depth knowledge in marriage affairs have posited that the success of every marriage depends on the good counseling that the married couples receive from and in most times the ministers of God showing them what God expects from them as a newly wedded couple.


Then the very section that I love so much because it helps me to learn a lot about finding a soul mate, the section where the husband is made to tell how he met his wife.


It is on a minimal side that you hear many husbands revealing how they met their wives either for being shy or wanting to keep it secret.


But often than not, you hear husbands giving thanks and praises to the almighty God for connecting them[bride and bridegroom] through prayer, through a pastor, through their parents, relatives or friends. All that you hear is “it was through a miracle”.


So finding your soul mate is not just a matter of going on many dates or networking to make new acquaintances, to draw the soul you desire as you need to become that level of soul yourself which means developing yourself spiritually.


Before talking about the Jewish Kabala teachings and doing the spiritual works the Holy Zohar teaches about connecting to your soul mate but let me first of all touch on what the bible says about marriage.


Often times we hear many people claiming marriage was first instituted in the Garden of Eden where God took part of Adam's ribs and created a woman called Eve for him.


That is true. But the true marriage principles and procedures to follow can be found in Genesis Chapter 24, where the whole chapter talks about Isaac and Rebecca's marriage instituted by God for every Christian to follow.


When asked should the lady refuse to come with us to her husband should Isaac be taken to that land? Abraham answered saying no. But the lord God will send his angels ahead of you to find a wife for my son Isaac, Abraham assured his servants ahead of their journey.


Through prayer as the story tells us everything worked perfectly for the servants who met Rebecca by the well and followed the processes in marrying Rebecca for Isaac.


Isaac did not go searching for a woman to introduce to his parents to marry for him. Neither did Abraham his father just got up and married any woman from anywhere for his son.


Rather, he joined his father Abraham in serious prayer to God and the lord answered their prayers by connecting Rebecca to Isaac.


Rebecca also did not jump from funeral after funeral, party after party and night club after night club to look for a husband. She humbled herself before her parents who raised her into woman.


Rebecca after receiving the blessings of her parents to marry Isaac straightaway followed the servants who brought her to Isaac, her husband who loved her so much and after the death of Sarah, Isaac's mother it was Rebecca who comforted Isaac.


When we turn our attention to what the Holy Zohar tells us, it also reveals the mysteries surrounding male and female aspects of the soul as well as the concept of soul mate relationships.


According to the Zohar, when a complete soul enters this physical realm, it does so through the angels which in the process of descending from the upper world, the unified soul separates into male and female halves.


Whiles the angels are responsible for bringing souls into the physical dimension; it is the Creator [God] who reunites two halves of one soul when the time is right, as it is only the creator who knows for certainty who the true soul mates are.


With the marital story of Isaac in the bible as we read the whole chapter of Genesis 24 and what the Holy Zohar teaches about connecting to your soul mate, it is clear that all insist on prayers for one to find a soul mate.


What do we see today? Women looking for soul mates concentrate on wearing fanciful dresses to entice men or expose some of their sensitive parts to seduce men, going on many dates or networking's to make new acquaintances.


By so doing, potential couples fail to get connected to their rightful soul mates as the living God has planned for them and the marriage suffer instead.


Fellow readers, taking a look at the number of marriages that have fallen on rocks, looking for a right soul mate is not exposing your sensitive parts to attract a partner to love you like is being shown on some Ghanaian media websites “Fashion Police” as a typical example.


Finding a soul mate is not enticing a woman with luxurious stuff or seducing a man with fat bank accounts or throwing glamorous wedding meaning your marriage is going to be the best ever to witness in the world.


Rather finding a soul mate and a rightful soul mate to enjoy the full benefits of the holy matrimony means going down on your knees and pray asking God to connect your soul mate to you and the miracle will follow.


It happened to Isaac and Rebecca in the bible as Abraham prayed asking for a wife from God for his son Isaac to marry. It has happened to many Christians who defied all odds of this present age and went on their knees praying to God for their soul mates. It has happened to me your author that is why I am sharing this taught with you today.


For God to bring your rightful soul mate to you, it behooves on you to do one thing which is closing your heart to the worldly demands and supply of soul mates and go on your knees praying and asking God to give you your soul mate.


By closing your heart to the world means just saying “NO” to mere proposals and seductions from so called would be soul mates that this world provides for God to open your heart to the very one he has prepared for you.


If after reading this article you want me to show you how I sought the face of the lord and he answered me for you to also seek his face in getting a soul mate, please send a message to [email protected] and I will surely share the Lord's direction with you.