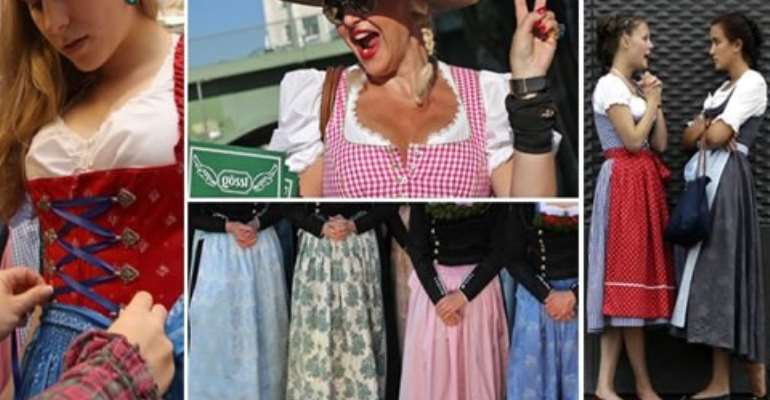 In Austria and Germany, the traditional costume known as Tracht always used to be the preserve of the ultra-conservative. But these traditional clothes - lederhosen for men and dirndl dresses for women - have recently become rather fashionable.

High on a hill near Salzburg, a farmer, with an impressive beer belly, danced at a village festival.

He was wearing a checked shirt, embroidered braces and weather-beaten leather shorts, known as lederhosen. They were very short. Little of his stout, hairy thighs was left to the imagination.

Close-by, a group of girls giggled at some private joke. They could have been extras from The Sound of Music, because they were all wearing dirndl dresses: dark bodices over white blouses with plunging necklines, and full skirts with colourful aprons.

"It is quite normal to wear Tracht here," one of the villagers told me. "Perhaps not everyday - but it is part of who we are."

And not just in the countryside. Even in big cities like Vienna, you come across people going to work in traditional jackets with short green collars, loden coats with horn buttons and even dirndls.

In post-war Austria, it has often been seen as a political statement.

"For many years, wearing Tracht was associated with conservative or even far-right ideology," one Viennese told me.

"During the Nazi era, Jews were forbidden from wearing it - and later it was often taken as a sign that you were not open to the world. But that is changing. In fact these days it is really trendy."

So trendy, in fact, that Tracht retailers are reporting big profits. There are cut-price Dirndl-chains, and discount supermarkets sell lederhosen, along with cheap food and socks.

Recently at a party, I met Clemens, who is in his early 30s and works for a telecommunications company. He says he likes to mix the traditional and the modern.

"On dress down Fridays at my office, a lot of us wear lederhosen," he told me. "I like wearing them with a T-shirt. It is comfy and I do not think it is political any more."

It is still not everyone's cup of tea. Another friend told me vehemently he would not be seen dead in lederhosen - or even a loden jacket. "It is what far-right politicians wear - never!" he said. But then he relented slightly. "Perhaps I might, if I was invited to a wedding."

And weddings in traditional costume are now very popular. At the shop belonging to Austria's Grand Dame of Tracht, Gexi Tostman, there are albums full of personal photos of grooms in brilliant waistcoats and knee breeches and brides in silken dirndls.

Mrs Tostman thinks that the change in attitude towards Tracht owes a lot to a remark by the British designer Vivienne Westwood on a visit to Austria in 2001.

"Vivienne Westwood said, 'I do not understand you Austrians. If every woman wore a dirndl, there would not be any more ugliness'." The quote caught on, Mrs Tostmann told me, and slowly young people started to reclaim their heritage.

"Can anyone wear a dirndl?" I asked her. "Or do you have to come from Austria?"

"You cannot wear the Tracht from the Bregenzer Forest region," she told me. "Traditionally, that is just for them - but otherwise yes, anyone can wear it. It is a gesture of respect towards Austria."

And here I have to make a confession. Despite having lived in Austria for more than a decade, I had never been tempted to wear a dirndl. But that, I decided, was about to change. And so I asked to try one on.

A smiling saleswoman ushered me over to the changing area and handed me a dirndl. It had a dark blue bodice with tiny white polka dots, a black skirt and a pink and white striped apron.

I put on the little white blouse, and then stood still while she buttoned me into the tight bodice, and tied the apron in a bow at my waist. "There now," she said.

As I looked at myself in the mirror, I began to see why Vivienne Westwood is such a fan of the dirndl.

The puffy sleeves, close-fitting bodice and the full skirt produced an hourglass effect - very flattering to a woman's figure. And the contrasting colours and patterns were pretty.

But I did not buy it. It still felt slightly too Austrian for someone of Anglo-American heritage like me. And because I knew there was one thing I would never be able to resist: the constant urge to sing "Edelweiss".