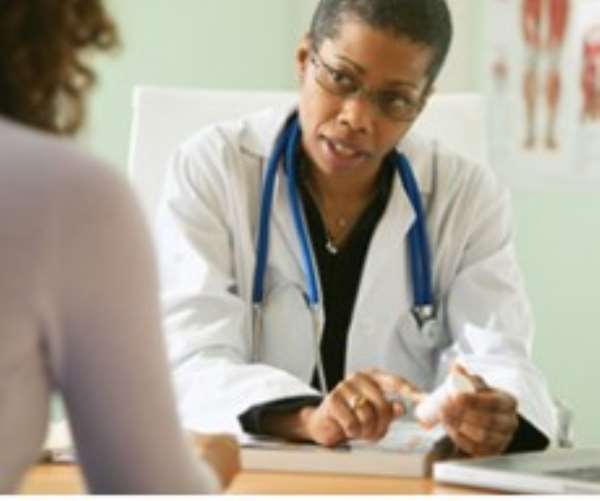 How often does your doctor ask about your sexual life? Unfortunately, the answer may be: not often enough. Leaving the subject off the check-up checklist could mean missing an important link to overall wellness.

Results of a comprehensive national survey of U.S. obstetrician-gynecologists regarding communication with patients about sex have found that too often doctors aren't having "the talk" with their patients. And when the topic of sex does find its way into a doctor's office or exam room, chances are the discussion only skims the surface.

The report, "What We Don't Talk about When We Don't Talk about Sex," uncovers the shortfalls in doctor-patient communication around sexual matters and examines the barriers that may be limiting the range of dialogue in a typical evaluation of a woman's general health. The study was recenctly published in the Journal of Sexual Medicine.

The survey, conducted by a team of University of Chicago researchers, found that while nearly two-thirds of OB-GYNs routinely inquire about patients' sexual activity, other aspects of female sexuality are not routinely addressed. Only 40 percent of those surveyed routinely ask questions to assess for sexual problems or dysfunction. Far fewer, 29 percent, routinely ask patients about satisfaction with their sexual lives and 28 percent routinely confirm a patient's sexual orientation.

Given the well-established link between a sexual function and overall health, the study's authors say their findings point to a clear need for stronger guidelines for doctors on conducting a thorough sexual history.

"As a practicing OB-GYN, many of my patients say I'm the first physician to talk with them about sexual issues," said Stacy Tessler Lindau, MD, associate professor of obstetrics and gynecology at the University of Chicago Medicine, and the study's lead author. "Sexuality is a key component of a woman's physical and psychological health. Obviously, OB-GYNs are well positioned among all physicians to address female sexual concerns. Simply asking a patient if she's sexually active does not tell us whether she has good sexual function or changes in her sexual function that could indicate underlying problems."

There is strong evidence of a high prevalence of sexual function concerns among women. Recent studies estimate that roughly a third of young and middle-age women and about half of older women experience some sort of sexual problem such as low desire, pain during intercourse or lack of pleasure.

For most, the concerns go beyond physical -- in fact, the impact of sexual dysfunction can be far reaching. In addition to strained relationships, many women experience worry, shame, guilt and feelings of isolation. If the doctor doesn't ask, patients often assume the topic is not welcome for discussion.

"Many women are suffering in silence," Lindau said. "Patients are often reluctant to bring up sexual difficulties because of fear the physician will be embarrassed or will dismiss their concerns. Doctors should be taking the lead. Sexual history taking is a fundamental part of gynecologic care. Understanding a patient's sexual function rounds out the picture of her overall health and can reveal underlying issues that may otherwise be overlooked."

The study also takes a close look at whether factors such as gender, age, race, medical school location, immigration status, religious affiliation or type of practice play a role in the likelihood an OB-GYN will broach sexual matters. Not surprisingly, female doctors are more likely to address sexual activity with female patients. Doctors who see more patients for gynecology versus prenatal care tend to screen for sexual dysfunction more frequently than their colleagues. OB-GYNs age 60 and older are less likely to delve into a patient's sexual orientation or identity.

Generally, less than a third of all OB-GYNs surveyed routinely ask patients about their sexual orientation. Assuming heterosexuality can alienate a lesbian or bisexual patient and result in misinterpretation of symptoms and misdiagnosis. The report suggests this remains an important area for further research.

"One explanation for the findings may be a deficit in physician training about diagnosis and treatment of female sexual problems," said first author Janelle Sobecki, MA, a second-year medical student at Wayne State University. "Like patients, physicians may worry that raising the topic could offend or embarrass the patient. Physicians, especially OB-GYNs, are better positioned than patients to open the door for discussion."

For many women grappling with a sexual problem, the underlying cause may be treatment for another medical condition. Drugs regularly prescribed for conditions from depression to breast cancer can have a negative effect on sexual function in some women, including low libido. Patients may be better able to tolerate these side effects if they know to expect them.

An emerging area of concern for Lindau -- a specialist in maintaining sexual function in cancer survivors -- is prevention measures for patients at high risk for developing breast cancer. Drugs such as aromatase inhibitors and tamoxifen, which interfere with the activity of estrogen and therefore reduce breast cancer risk, are becoming more widely used, including among younger women.

"Women are not being counseled on the potential sexual side effects of these treatments, and we have limited data to appropriately counsel them," Lindau said. "For men with prostate cancer, in comparison, the impact of treatment on sexual function is typically discussed as part of deciding which therapy to try."

One reason doctors may feel more comfortable discussing sex with men is the availability of FDA-approved treatments for erectile dysfunction, while medical treatments for female sexual dysfunction are limited.

The good news is that women are seeking and demanding more information about their personal health, oftentimes turning to the anonymity of the Internet as a first resource. Ideally, Lindau adds, these women are empowered by reputable online and other media sources to know that they are not alone in their concerns and will gather the courage to begin a conversation with a physician.

"If you have a doctor you trust who has not brought this topic up, give it a try," Lindau adds. "If you are waiting for the doctor to start the conversation, it may never happen. Communication is key."

This study was supported by grants from the Greenwall Foundation, John Templeton Foundation, the National Center for Complementary and Alternative Medicine and the National Institute on Aging. Additional authors of the study include Farr Curlin, MD, and Kenneth Rasinski, PhD.