A Ghanaian-centric Clarification of the Marriage Ceremony

By Bernard Asher I UK 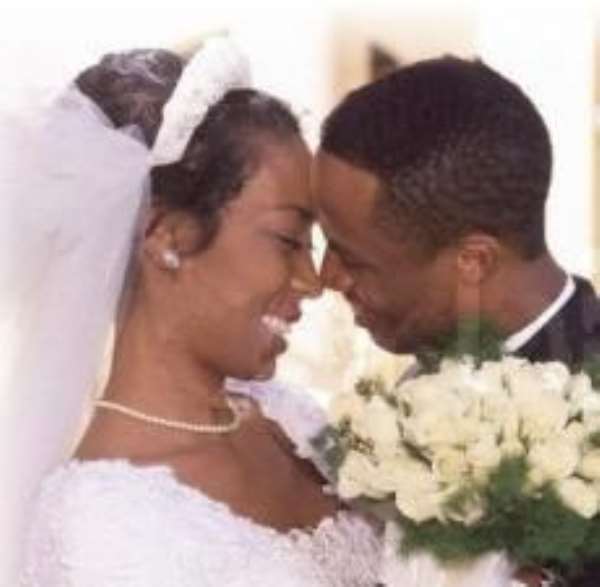 For the umpteenth time I have had to try to educate another Ghanaian couple about what constitutes a marriage- an endeavour I vowed never to engage in again due to the dogged determination of most Ghanaians to refuse any elucidation about the matter. However I could not stand aloof in this particular instance as there was the real risk of my obviously loud silence being misconstrued as nonchalance-something I could ill-afford given that the couple had been very good friends for over 20 years.

The main problem, dear reader, was the fact that the couple had decided recently to tie the proverbial knot or 'noose', (depending on the outlook of the reader), and had major disagreements about how the marriage ceremony should be conducted. Whiles the woman was adamant and hell-bent on having “an engagement, blessing and wedding”; the man was of the very calculated and rational view that the preceding amounted to an unnecessary waste of scarce financial resources and triplication of one and the same thing.

In my attempt to settle this dispute I asked the woman to clarify the difference between the above three ceremonies. According to her an engagement was the traditional ceremony held between the family members of the couple; a blessing was the church ceremony and then the wedding was where the bride and groom would be clad in their fancy dresses and paraded around for all to see.

At this, I proceeded to explain the fallacy of her thinking and the manner in which it was indicative of her subordination of Ghanaian traditions and culture to those of the west. I must confess I didn't expect her to buy into my clarification and for her to allow me to, in a puff of breath, ruin the most exciting period of her adult life. But then again I had to do my best to appear concerned about their welfare. The following are the explanations I offered:

What is a Wedding?
The Oxford Dictionary defines a 'wedding' as “any ceremony or act of marrying”. Thus any ceremony where two individuals are joined in matrimony is a wedding ceremony be it the traditional Ghanaian ceremony, the church ceremony or the fancy dress ceremony! Now the reader will appreciate that different cultures will have their various quintessential wedding practises and apparels. The tradition of the bride wearing a white wedding gown and the groom donning a suit is obviously very western in its outlook and history and largely based on western fairy tales. One would expect that wedding ceremonies in non-western cultures would obviously have different practises and dress styles albeit, as usual, western influence ran deep in many cultures and more so in the Ghanaian one.

What is an Engagement?
Again according to the Oxford Dictionary an engagement refers to 'the act of being engaged in or with anything'. Secondly it defines an engagement as a 'betrothal'. Going by the first definition a 'boyfriend-girlfriend' relationship is an engagement in as much as the two are 'engaged' with each other in doing something be it sex, romance or both.

The following example would hopefully suffice in putting the meaning of this term in proper perspective. When one is engaged in a phone call with another and a third party tries to call either party usually the phones of the two parties engaged in the telephone chat will be 'engaged' and as such will not permit the third party to enter the conversation, unless of course either party chooses to replace the current call with the new call. Now in most instances an engagement is a loose and largely unregulated arrangement by two consenting individuals and for this reason it can be ended as and when both or either party chooses to do so without any customary or legal consequences. Indeed a couple does not have to be engaged prior to tying the proverbial knot or 'noose'.

The ring given by the man to the woman at the engagement in no way carries the weight that its wedding equivalent does. Indeed it is mostly decorative and only totemic in as much as it is able to assure the two parties of the personal commitment they have made to each other. Thus this ring should be worn in anticipation of the real wedding band and should ideally be removed and replaced by the wedding band when the wedding takes place. Basically what the engagement does is to announce to the world that the wearer is engaged with someone else.

In fact the phrase 'engaged to this or the other person' should ideally be replaced with 'engaged in this or the other with this person' or better still 'engaged with this or the other endeavour or person'. But as the reader may well be aware it is commonplace to see women spotting both the engagement ring and the wedding band-something that betrays their lack of understanding of the true totemism of both rings.

The engagement ring should only be worn in anticipation of the wedding band after which it should ideally be removed since the wearer is no longer engaged but married!

The equivalent of the second definition of engagement, i.e., betrothal, in Ghanaian tradition is the knocking ceremony. Here again this is only an expression of intent or the asking of the woman's hand in marriage and may constitute part of the engagement process. Here again a betrothal or engagement or 'knocking' may not lead to a marriage and can be broken on the whim of either couple.

What is the Traditional Ghanaian Marriage ceremony?

Let me start by stating what the Ghanaian traditional marriage ceremony is not! This ceremony is not an engagement (as explained above) and neither is it- by any flex of the imagination- subordinate or inferior to a church ceremony or any other ceremony for that matter! Going by the definition of wedding above, the traditional ceremony is well and truly a 'wedding' ceremony and is regulated by a complex of conventions, rules and traditions and statutes.

Thus to ask somebody after they have just been through a traditional ceremony whether that is to be followed by a 'wedding' is to be either grossly ignorant of the true meaning of what the word 'wedding' or display the congenital colonial mentality that so plagues the Ghanaian mind! The equivalent of the preceding fatuous question is to ask an English couple whether they will have another wedding after they have had a wedding ceremony!

Essentially, therefore, the traditional wedding underlies all other forms of marriage ceremonies in Ghana and can, on its own, constitute a bona fide union between two consenting adults. Now this nugget of truth is commonplace to most enlightened people albeit generations of Ghanaians appear to be downplaying the importance and definition of this all-important institution.

What is the Court or Legal Wedding?
Historically this is a fairly recent marriage ceremony and basically reduces the institution of marriage to a contract signed by two consenting adults. This is an attempt to bring some state control into what had largely been an institution regulated by the church or de rigueur, especially with regards to property and offspring amassed by the couple during the period of the marriage. Essentially this is to ensure that fairness is introduced into the union in terms of custody of the children and the sharing of property.

What is the Church or Religious wedding, a.k.a 'Blessing?

For the Christian the church wedding is in line with the acknowledgement that the institution of marriage was ordained by God. Thus the Christian couple would hold a ceremony at church and exchange vows under the supervision of Jehovah God in replication and pursuance of the union between Adam and Eve and in obedience of the command to 'go forth and populate and the earth'. Basically what the church wedding does is to re-interpret the union as a tripartite relationship between God, the bride and the groom.

From the foregoing, it would be completely ignorant to assert that one would want to have an engagement, a wedding and a blessing- something I put to this bride-to be! And it would be even more foolish, I further explained- to claim to wish to have a traditional wedding and then assert (as she was doing) that one has to necessarily have a church wedding in addition, as according to her- without the latter the former is inadequate. Indeed if the couple are Christian and so wish to introduce God into their marriage then they could get the church to attend the traditional wedding and then perform whatever rituals need to be performed.

Additionally the couple may choose to wear whatever clothing they desire including the white gown for the groom and a suit for the bride (or is the other way round?). If the couple so desires they could well have an engagement, a traditional wedding, a church blessing and a legal ceremony in an attempt to convince themselves of the firmness of their commitment.

But the couple should be aware that doing the above only amounts to a replication of more or less the same thing. Now whiles the preceding is entirely fine, what is wholly unacceptable is to label the august institution of traditional marriage as a mere engagement which necessarily has to be completed or made whole by any other ceremony! As earlier stated the traditional ceremony is singularly capable of unifying a couple in the Ghanaian context.

At this the woman squirmed and puffed! She clearly was not going to wear a gown at her traditional wedding since, to her, that was completely inappropriate! Upon asking her why this was the case, she found no sensible answer other than the fact that 'it was just not done'. At this I threw in the proverbial towel, downed my last glass of cognac, wished them luck and hurriedly took my leave!

Hopefully the above analysis clarifies the ceremony of marriage to the reader.

It is also my hope that Ghanaians can, in both word and deed, rescue this august institution from being irrecoverably diluted, downplayed and muddied by its western equivalent as many others have been. In fact, thinking about it, it might actually be too late anyway!

Be strong — Isaac Adongo consoles Bawumia with a cow for mot...
32 minutes ago

One wife one man is not in the Bible, every man will marry 5...
54 minutes ago