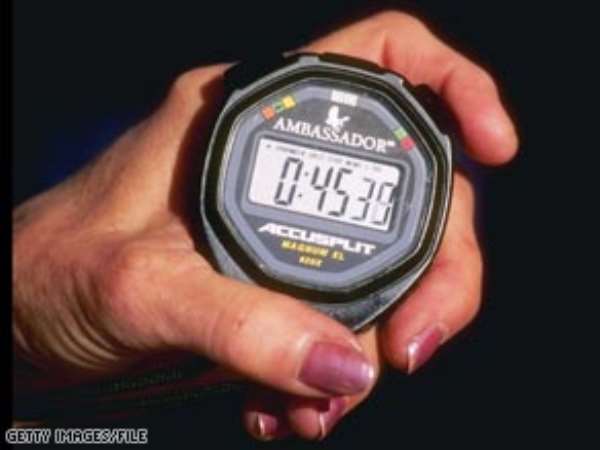 NEW YORK (AP) -- Maybe men had it right all along: It doesn't take long to satisfy a woman in bed.

A survey of sex therapists concluded the optimal amount of time for sexual intercourse was 3 to 13 minutes. The findings, to be published in the May issue of the Journal of Sexual Medicine, strike at the notion that endurance is the key to a great sex life.

If that sounds like good news to you, don't cheer too loudly. The time does not count foreplay, and the therapists did rate sexual intercourse that lasts from 1 to 2 minutes as "too short."

Researcher Eric Corty said he hoped to ease the minds of those who believe "more of something good is better, and if you really want to satisfy your partner, you should last forever."

The questions were not gender-specific, said Corty. But he said prior research has shown men and women want foreplay and sexual intercourse to last longer.

Dr. Irwin Goldstein, editor of the Journal of Sexual Medicine, cited a four-week study of 1,500 couples in 2005 that found the median time for sexual intercourse was 7.3 minutes. (Women in the study were armed with stopwatches.)

It's difficult for both older men and young men to make sexual intercourse last much longer, said Marianne Brandon, a clinical psychologist and director of Wellminds Wellbodies in Annapolis, Maryland.

"There are so many myths in our culture of what other people are doing sexually," Brandon said. "Most people's sex lives are not as exciting as other people think they are."

Fifty members of the Society for Sex Therapy and Research in the U.S. and Canada were surveyed by Corty, an associate professor of psychology at Penn State Erie, The Behrend College, and student Jenay Guardiani. Thirty-four members, or 68 percent, responded, although some said the optimal time depended on the couple.

Corty said he hoped to give an idea of what therapists find to be normal and satisfactory among the couples they see.

"People who read this will say, 'I last five minutes or my partner lasts eight minutes,' and say, 'That's OK,' " he said. "They will relax a little bit."