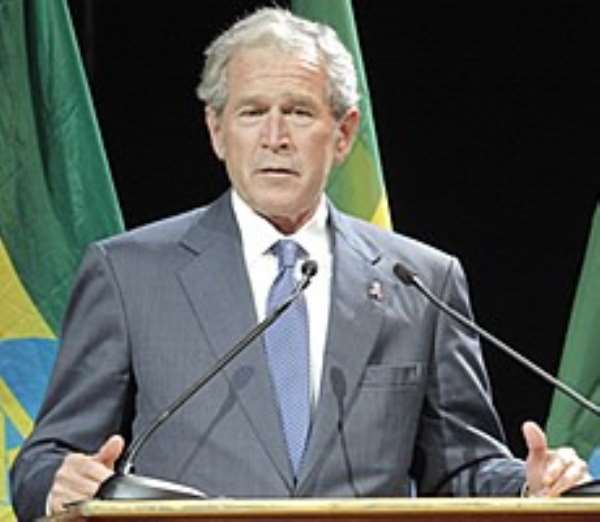 Former US President George W. Bush has been awarded the Best Man in Leadership at the on-going 16th International Conference on HIV/AIDS and Sexually Transmitted Infection in Africa (ICASA) in Addis Ababa, Ethiopia.

The conference has been organized by the Society on AIDS in Africa in partnership with the United States President's Emergency Plan for AIDS Relief-Ethiopia, UNAIDS-Joint United Nations Perogramme on HIV/AIDS, United Nations Population Fund (UNFPA), United Nations International Children's Emergency Fund (UNICEF) and the World Health Organization (WHO).

The Conference which is under the theme “Own, Scale-up and Sustain” aims to serve as an advocacy platform to mobilize African leaders, partners to increase ownership, commitment and support for the response to HIV, AIDS, STIs, TB and Malaria as well create opportunities to define priorities and set policy and programme agenda to enhance mobilization and effective utilization of resources.

The award is in recognition of Mr Bush's support in the HIV/AIDS response during his administration through the setting up of the Global Fund.

Presenting the award to the Former US President, the Prime Minister of Ethiopia praised him for the numerous contributions he has made to the lives of people living with HIV/AIDS.

Mr Zenawi said it was important for world leaders to follow the footsteps of the former US President to support Africa countries in their quest reduce the spread of the epidemic on the continent.

On his part, President George Bush thanked the organizers for the honour bestowed on him and pledged his continued support for the fight against HIV/AIDS.

To him, partnership plays a key role in achieving a zero infection of the epidemic across the globe especially in Sub-Saharan continent.

He, therefore, called on African leaders to take up the responsibility for the successes of all the programmes initiated on HIV/AIDS.

He praised his successor, President Barack Obama for his administration's prioritising of HIV/AIDS issues.


Former President George W. Bush Jr. who was accompanied by his wife, Mrs. Laurent Bush and the family praised his wife for championing the cause on maternal deaths across the globe especially in Sub-Saharan Africa.

According to the Executive Director of UNAIDS Michel Sidibe, Africa over the past decade, has made remarkable progress in its HIV/AIDS response adding that, the total number of new HIV infections in the region has declined by more than twenty six percent.

Mr. Sidibe however regretted that, with all these significant gains made, Africa still remains the region most heavily affected by HIV indicating that, last year, an estimated sixty eight percent of all people living with HIV resided in Sub-Sahara Africa.

He therefore called on the Africa Union (AU) to immediately call for a crisis meeting to discuss the decision of the Global Fund not to support HIV/AIDS programs next year.

He said it will be disastrous for Sub-Saharan Africa if the Global Fund insists on not funding countries with the epidemic.

In his key note, the Prime Minister of Ethiopia, Meles Meleszenawi said, following the discovery of AIDS thirty years ago, ICASA 2011 provides the opportunity for leaders to take stock of progress made and challenges still faced in reversing the epidemic in countries across the continent.

He said the theme for the conference “Own, Scale-up and Sustain” is appropriate because with the growing global economic uncertainty, it is vital that African countries develop innovative and sustainable strategies for mobilizing new resources, human, intellectual and material with a view to fortifying and sustaining the response to the epidemic in the coming years.