The family that eats together, stays healthy together 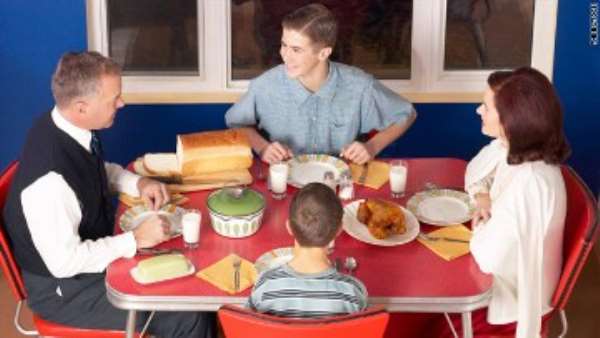 
A study in the journal Pediatrics finds that children and adolescents who share meals with their families at least three times per week are less likely to be overweight, eat unhealthy foods or be at risk for eating disorders.

"It tells parents what they can do to help in those nutritional issues with their children," said lead study author Amber Hammons, Ph.D., of the University of Illinois at Urbana Champaign.

"We understand that parents are really busy, and that's definitely one of the biggest problems that's cited by parents- that it's just so difficult to manage time to prepare it and then to get all the family members to be present," she said. "What this study is suggesting is that sitting down for three meals out of the week tends to show this significant benefit." The researchers examined 17 previous studies, which involved 182,836 children aged 2 to 17. Their findings reinforced the recommendation by the American Academy of Pediatrics, as part of its campaign to prevent childhood obesity.

The researchers found that three or more family meals per week were associated with a 12% reduction in the odds for being overweight, a 20% drop in the odds of eating unhealthy foods regularly and a 35% reduction in disordered eating- including purging, the use of diet pills, skipping meals or the use of smoking cigarettes as a way to control weight.

"I think that that really shows that there's an adolescent interest in eating healthy foods with the family and knowing that when they sit down to eat with their families, they're more likely to be eating healthy."

She noted that adolescents who sit and eat with their families are less likely to be eating fast food with friends or junk food by themselves.

Hammons suggested future studies include observing families at mealtimes by going into homes.