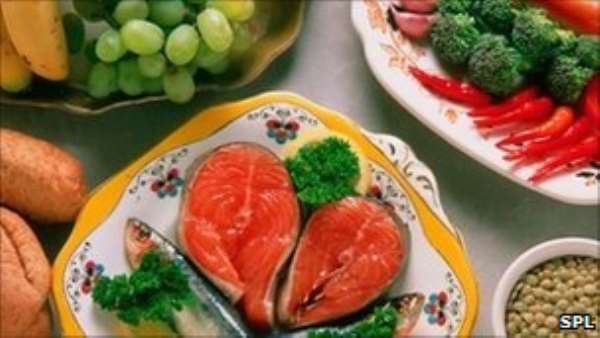 Research in the Journal of the American Dietetic Association found those who ate a low-fat diet that contained lots of fruit and vegetables lowered their risk of dying over 10 years.

Those who ate a high fat diet rich in ice cream, cheese, and whole milk, had the highest risk of death.

The study showed that 12 extra people in every hundred survived over the ten years, if they ate healthily.

Participants were split into six different groups, according to how often they ate certain foods.

People in this group had healthier lifestyles too; smoking less and being more active than other participants.

Researchers found that those who followed a predominantly high fat, dairy products diet, had a higher death risk than those in the healthy food group.

No significant differences in death risk were seen between the "healthy foods" eaters and the "breakfast cereal" or "refined grains" eaters.

Saturated fat
British dietitian Lucy Jones, who is a spokesperson for the British Dietetic Association, said that saturated fat and trans fatty acids (a type of fat found in processed foods) were a common factor for those in the higher risk groups.

"The most harmful food groups appear to be the 'sweets and desserts' group and the 'high fat dairy group' in terms of risk of death," she said.

"These groups are both high in saturated fat and trans fatty acids in addition to calories, contributing to obesity and high cholesterol."

However, she noted that participants were not controlled for their weight and body mass index, which, she said, could mean that the increased risk of death was linked to being overweight.