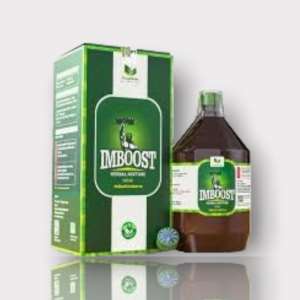 Two studies (Batool et al. 2018; Zhang et al. 2019) confirmed that the leaves of Mangifera indica have been used in Ayurveda and traditional Chinese medicine for many years in naturopathic healing.

Zhang et al. (2019 ) explained that the leaves, especially have been used in naturopathic practices to treat diabetes and many other health conditions as compared to other parts such as the stem, bark, roots, and fruit.

One study by Ediriweera et al.(2017) found that the leaves of mango are loaded with diverse significant plant compounds, such as polyphenols and terpenoids. One such is Terpenoids, which another study by Grassmann, J(2005) found that is good for eye health and immunity. Terpenoids also act as antioxidants , which protect our cells from harmful activities.

However, this can be dealt with by using mango leaves. One animal study ( Omairi et al. 2018) found that mango leaves’ anti-inflammatory properties could protect the brain from conditions like Alzheimer’s or Parkinson’s. In this study, a mango leaf extract given to rats at 2.3 mg per pound of body weight (5 mg per kg) helped counteract artificially induced oxidative and inflammatory biomarkers in the brain.

One study by Zhang et al.( 2013) found that the mango leaf extract could manage obesity, diabetes, and metabolic syndrome by interfering with fat metabolism.

Two studies( Nigro et al. 2014; Achari and Jain, 2017) explained that Adiponectin is a cell-signaling protein that plays a role in fat metabolism and sugar regulation in your body. Higher levels could protect against obesity and obesity-related chronic diseases.

In another study of rats( Ramírez et al. 2017) who were obese, those fed mango leaf tea in addition to a high-fat diet had less abdominal fat as compared to those given only the high-fat diet.

In another study, which happens to be in humans ( Na et al. 2015) conducted for 12 weeks in 97 adults with excess weight, those given 150 mg of mangiferin daily had lower fat levels in their blood and better insulin resistance index as compared to the placebo. This means that mango leaves are better for blood sugar management.

Studies have confirmed that Mango leaves have a better score in the management of blood sugar due to their effects on fat metabolism. For instance, Zhang et al. (2019) study used the mango leaf extract administered to mice for 2 weeks and found that it has lower triglyceride and blood sugar levels.

In another study in rats by Sandoval-Gallegos et al. (2018) administered 45 mg per pound of body weight (100 mg per kg) of mango leaf extract and found that it decreased hyperlipidemia, a condition characterized by abnormally high levels of triglycerides and cholesterol.

An earlier study( Youn et al. 2008) found that the mango bark has strong anticancer ability due to its lignans, which are another type of polyphenol. Additionally, One significant study by Glinskya and Razc (2009) found mangos to be loaded with pectin. These pectins, which aid to lower cholesterol levels in the blood could also fight prostate cancer, in vitro studies .

Another good news for men is that a compound within pectin combines with galectin-3, a protein that is pivotal in fighting inflammation and cancer progression. For instance, an old human study by Daviglus et al (1996) found that higher dietary intakes of vitamin C and beta-carotene , an antioxidant found within the mango, increased survival rates in men with prostate cancer. This means that IMBOOST could help men diagnosed with prostate cancer improve their quality of life(QOL).

Finally, another in vitro study by Wilkinson et al.(2011) conducted by the University of Queensland also established that extracts of mango flesh and peels were effective at blocking the growth of breast cancer cells. This also suggests that IMBOOST formulated in Ghana with mango extract could be integrated into the natural cancer treatment protocol.

Though human studies are limited in this area. Some studies(Prabhu and Rajan, 2015; Priya et al. 2011; Lima et al. 2006) found that mango leaf and other parts of the plant have traditionally been employed in naturopathic practice to treat stomach ulcers and other digestive conditions.

The fiber in Mango, (Anderson et al. 2009; Anderson et al. 2009) has been found to add bulk to the stool to increase stool frequency in people with constipation, and also help protect against other gastrointestinal conditions , including hemorrhoids, GERD, intestinal ulcers, and diverticulitis.

A recent study by Zhang and Duan, (2018) found that mango leaf extract could decrease signs of skin aging due to its antioxidant content.

Another test-tube study by Chirayath et al.( 2019) found that the mango leaf extract could have antibacterial effects against Staphylococcus aureus, a bacterium that can cause staph infections . In a recent study by Pleguezuelos-Villa et al. (2020)the Mangiferin in Mango has also been studied for psoriasis, a skin condition that causes itchy, dry patches. A test-tube study using human skin confirmed that this polyphenol encouraged wound healing.

Senaidy, AM(2009) found that due to the high level of vitamin A and beta-carotene is lower in children with asthma. Hence, mango vitamin A and carotene content could have some impact on allergic diseases, such as asthma. 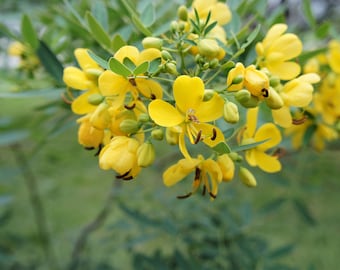 One study on common fruit fly by Wongchum and Dechakhamphu(2021) examined the claim of longevity and found that eating a diet that contains siamia could significantly extend the mean life span of the common fruit fly by 14% compared with the control diet.

The study provides supportive evidence that supplementation with siamia prolonged the life span and reduced oxidative stress in the common fruit fly. Though this is an animal study, it provides the clue that taking IMBOOST as a supplemental diet could be supporting your age.

One study examined cassia siamia as a natural dewormer with the pharmaceutical drug ivermectin as a control. The study found that Cassia siamea may be used as a natural source of lead compounds for the development of alternative anthelmintic.

One study by Kaur et al.(2006) suggests that the alcoholic extract of C. siamea flowers has potent antioxidant activity against free radicals, prevent oxidative damage to major biomolecules, and affords significant protection against oxidative damage in the liver. 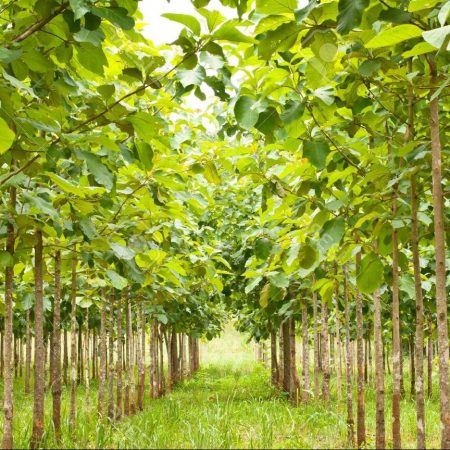 Tectona grandis, commonly known as teak, is a tall deciduous tree that typically grows to 150' tall in its native habitat, but to about 80' in cultivation. It is native to India, Myanmar (Burma), Southeast Asia, Malaysia, and Indonesia, but is now planted in tropical to sub-tropical areas throughout the globe, not only for ornamental reasons but also in plantations for commercial timber production. Timber from this tree is an important tropical wood (at or near the top of the list of world hardwoods).

Unfortunately, demand for teak timber has far outpaced available supply with the result that many of the old teak forests from native habitat areas have now been decimated by overlogging. Even though the demand for teak wood remains unmet, commercial plantations help meet that demand in a way that does not harm natural plantings which in many areas are still subject to logging.

Teak trees feature: (a) trunks with scaly gray to gray-brown bark topped by an open crown of spreading branches, (b) large, rough, leathery, ovate-elliptic, green leaves (to 18-30" long) which are covered by gray-green stellate hairs, (c) fragrant, finely-pubescent, white flowers which bloom in summer (June-August) in large terminal panicles to 16" long, (d) globose, finely pubescent fruits (to 2/3" diameter) enclosed in egg-shaped calyxes which mature from September to December, and (e) dark yellow trunk wood which turns an attractive deep brown when exposed to sunlight and air.

Teak wood is hard, durable, fine-grained, resistant to decay if exposed to moisture, and of attractive deep brown color. Teak wood is used in a variety of ways, including (a) for outdoor purposes, it is used in the manufacture of outdoor furniture, boat building, doors, and window frames, and (b) for indoor purposes, it is used for flooring, fine furniture, and veneer. Teak is the national tree of Indonesia.

Leaves of the teak wood tree are used in making Pellakai gatti (jackfruit dumpling), where a batter is poured into a teak leaf and steamed. This type of usage is found in the coastal district of Udupi in the Tulunadu region in South India. The leaves are also used in gudeg, a dish of young jackfruit made in Central Java, Indonesia, and give the dish its dark brown colour. 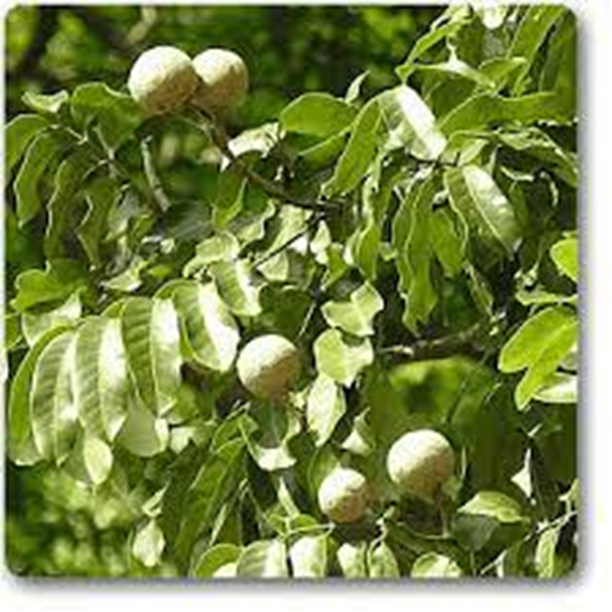 Its medicinal uses are as a tonic and fever medicine; a chewing stick for treating toothaches, dental caries, and septic mouth, and for treating diarrhea, dysentery, and malaria. In most parts of West Africa, the bark is used against fever and malaria; hence, it has been described as African quinine.

Wood is used for a variety of purposes. It is often used conventionally for carpentry, interior trim, and construction. Traditionally the wood was used for dugout canoes , household implements, djembe , and fuel wood. The bitter-tasting bark is used for a variety of medical purposes; it is taken against fever caused by malaria, stomach complaints, and headaches. It is applied externally to cure skin rashes, wounds, or any abnormality. It has been exported from West Africa (Gambia) to Europe since the first half of the 19th century and has been exploited heavily for its timber. It is now used more locally and is planted ornamentally as a roadside tree.

Animal studies have demonstrated the many benefits of the ingredients used in formulating IMBOOST Herbal Mixture. Some have demonstrated its effects on immunity, others as a natural dewormer, anti-inflammatory, and many others.

The author is a Professor of Naturopathic Healthcare and President of Nyarkotey College of Holistic Medicine & Technology (NUCHMT)/African Naturopathic Foundation. E-mail: