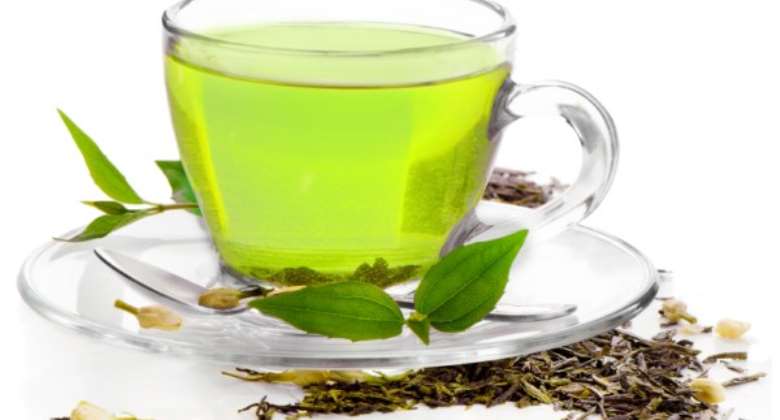 Green tea comes from the plant Camellia Sinensis. The two main varieties of tea plants are Camellia sinensis, a small-leaf variety native to China, and Camellia sinesis assamica, a large-leaf variety that was first discovered in the Assam district of India. Hundreds of cultivars and hybrid plants have evolved from these two plant varieties over time.

Green tea is produced by harvesting the leaves from the Camellia sinensis plant, quickly heated by pan frying or steaming, and dried to prevent too much oxidation from occurring. Oxidation turns the green leaves brown and alters their flavor. Brewed green tea is typically green, yellow, or light brown.

Green tea which originates from China traces back to 2737 B.C. It was accidentally discovered by the Chinese Emperor Shennong in the Yunan province of China when fresh tea leaves from a nearby Camellia sinensis tea tree fell into his cup of just boiled water. It was originally costly and only available to the highest tiers of Chinese society but became accessible to the general public for enjoyment and medicinal purposes in the 14th century. "The Classic of Tea" is the first written work to explain green tea culture and art around 800 A.D., by Lu Yu of China. Green tea is said to be mainstreamed in Japan around the 12th century and to this day, China and Japan are said to be the top exporting countries of Green tea in the world. Green tea traveled to the West in the 19th century with European explorers. 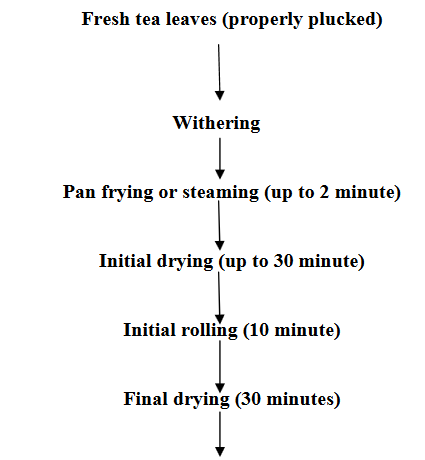 The withering process involves reducing moisture in the leaves by using the air-blown method for 12 to 24 hours. This is followed by pan frying or steaming also known as fixing. This is done to reduce or stop the enzymatic activities in the leaf that leads to oxidation and fermentation. This helps to retain the green color of the leaves. After fixing the leaves undergo the first drying stage in a drum which is swiveled for nearly 30 minutes to further reduce the moisture content of the leaves. This is followed by rolling to crush the leaves into smaller particles. After rolling, there is further drying before packaging.

Green tea has a high vitamin and mineral content and 5 cups of green tea will provide 5 to 10% of the daily requirements of riboflavin, niacin, folic acid, and pantothenic acid and also about 5% of the daily requirement of magnesium, 25% of potassium and 45% of the requirement for manganese (Shukla, 2007). It also contains the active ingredient polyphenol, with the subgroup catechins - A powerful antioxidant. There are four main catechins in green tea. They are (EC) -epicatechin, (ECG) -epicatechin-3-gallate, (EGC) –epigallocatechin and (EGCG)-epigallocatechin-3-gallate. Of these four, EGCG is present in the largest quantity, and so has been used in much of the research. As the main constituent, green tea polyphenols were documented for their antioxidant, anti-inflammation, anticancer, anti cardiovascular, antimicrobial, antihyperglycemic, and antiobesity properties.

Recent reports demonstrate that green tea may exert a positive effect on the reduction of medical chronic conditions such as cardiovascular disease, cancer, Alzheimer's disease, Parkinson's disease, and diabetes. The health benefits of green teas, in particular EGCG, are widely investigated, and these effects are known to be primarily associated with the structure and compositions of its polyphenols. (Xing et. al., 2019) 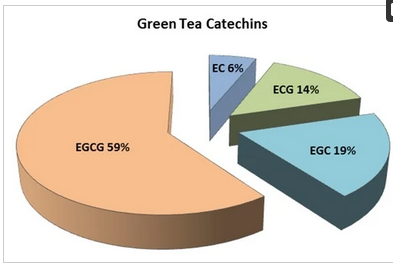 Studies have found that some compounds in green tea may help you live longer. For instance, Kuriyama et al.(2006) studied 40,530 Japanese adults over 11 years. Those who drank the most green tea — 5 or more cups per day — were significantly less likely to die during the study period. The study found that:

A previous study( Suzuki et al.2009) examined over 14,001 older Japanese individuals and found that those who drank the most green tea were 76% less likely to die during the 6-year study period.

Green tea does more than just keep you alert, it may also help boost brain function. The key active ingredient is caffeine, which is a known stimulant. Though green tea doesn’t contain as much as coffee, however, it has more to produce a response without causing the nervous effects associated with taking in too much caffeine.

Two studies(Nehlig et al. 1999; Fredholm, B.B, 1995) found that caffeine affects the brain by blocking an inhibitory neurotransmitter called adenosine. When this happens, it increases the shooting of neurons and the concentration of neurotransmitters like dopamine and norepinephrine.

Another, Ruxton, C(2008) found that caffeine could support many areas of brain function, including mood, vigilance, reaction time, and memory. Apart from caffeine, Nobre et al.(2008) found that green tea also contains the amino acid L-theanine, which can cross the blood-brain barrier.

More studies (Nobre et al. 2008; Nathan et al. 2006; Egashira et al. 2007) explained that L-theanine increases the activity of the inhibitory neurotransmitter GABA, which has anti-anxiety effects. It also increases dopamine and the production of alpha waves in the brain.

This means that two important energy-boosting compounds in green tea combinations could have synergistic effects. This means that the combination of the two can have particularly powerful effects in improving brain function(Kelly et al. 2008; Dodd et al. 2015). This also means that due to the L-theanine and the small dose of caffeine, green tea may give you a much milder and different kind of resistance than coffee. It has been reported that people experienced having more stable energy and being much more productive when they drink green tea, compared with coffee.

Boehm et. al. (2009) conducted a systematic review of fifty-one studies with more than 1.6 million participants in studies that looked for associations between green tea consumption and cancer of the digestive tract, gynecological cancer including breast cancer, urological cancer including prostate cancer, lung cancer and cancer of the oral cavity. The result of the review was conflicting with the evidence that the consumption of green tea might reduce the risk of cancer.

Another observation studies review (Ogunleye and Michels, 2009) found that women who drank the most green tea had an approximately 20–30% lower risk of developing breast cancer, one of the most common cancers in women

However, Reygaert (2017) found that case-control studies gave the most consistent results and were positive for reduced cancer risk in breast, cardiac, colorectal, esophageal, gastric, lung, ovarian, pancreatic, and prostate cancers. He conducted a review of research that focused primarily on using human subjects to investigate the health benefits of green tea. In his review, he also found a relationship between breast cancer risk and tea consumption, with the risk being highest in the groups that did not consume tea and lowest in the groups that consumed the most cups per day.

Finally, studies have found that adding milk to green tea reduces its antioxidant ability(Ryan and Petit, 2010).

Two studies from Japan that included nearly 50,000 people found a decreased mortality rate due to CVD based on the consumption of various numbers of cups per day(Nakachi et.al., 2000, Kuriyama et. al., 2006).

Other studies in Japan using a green tea extract found that, after 12 weeks, the subjects had reductions in body fat (10%), blood pressure (6.5%), and low-density lipoprotein (LDL) levels (2.6%), suggesting a reduced risk of CVD.

A large meta-analysis of 17 studies from over 30 years, including data from Europe, the UK, and the U.S., found that increasing the consumption of green tea by three cups per day decreased the risk of myocardial infarction (MI) death by 11% (Peters et. al, 2001).

Another study, by Hartley et al.(2013) found that green tea may improve some of the main risk factors for these diseases, which includes improving total cholesterol and LDL (bad) cholesterol levels.

An old study( Yang and Koo, 2000; Yokozawa and Dong, 1997) also found that green tea also increases the antioxidant capacity of the blood, which protects the LDL particles from oxidation, which is one part of the pathway toward heart disease.

On the other hand, a meta-analysis of tea consumption concerning stroke, myocardial infarction, and all coronary heart diseases based on 10 cohort studies and seven case-control studies by Peters et. al.(2022), showed an interesting geographical effect of green tea consumption.

According to their study, the geographic region where the studies were conducted appeared to explain much of the heterogeneity among coronary heart disease, myocardial infarction, and probably stroke results. With increasing tea consumption, the risk increased for coronary heart disease in the United Kingdom and stroke in Australia, whereas the risk decreased in other regions, particularly in continental Europe.

Another study, by Liu et al.(2013) found that green tea may improve insulin sensitivity and reduce blood sugar levels. In the case of Iso et al.(2006), the authors noted that Japanese individuals who drank the most green tea had an approximately 42% lower risk of type 2 diabetes.

Another study(Auvichayapat et al. 2008; Wang et al. 2012) studies found that green tea may help reduce body fat, especially in the abdominal area. One of these studies was a 12-week randomized controlled study involving 240 people with obesity.

Additionally, in the area of fat-burning, it has been established that most fat-burning supplements contain green tea. This is because one study(Diepvens et al. 2007) found green tea can increase fat burning and boost metabolic rate.

Another study(Gregersen et al. 2009) found that green tea has no effect on metabolism, so the effects may depend on the individual and how the study was designed.

However, Klaus et. al (2022) state that clinical results demonstrating efficacy in humans are scarcely making the clinical evidence regarding the preventive or therapeutic effects of green tea and its bioactive components in neuro-protection unsatisfactory.

With regards to Parkinson, Malar et. al, (2020) concludes from a review that even though in vivo studies have suggested that the consumption of green tea protects against free radicals, inflammation, and neuro-damages aiding the understanding of the overall mechanism of green tea, doses used may not be sufficient in humans to elicit similar effects due to complex physiological, social, and cultural development.

Some studies (Chatterjee et al. 2012; Anita et al. 2014; Naderi et al. 2011; Narotzki et al. 2012) suggest that the catechins in green tea can inhibit the growth of oral bacteria in the lab, but no evidence shows that drinking green tea has similar effects.

Side Effects of Green Tea

Green tea may change the effects of medicines such as nadolol, a beta-blocker used for high blood pressure and heart problems. It may keep nadolol from lowering your blood pressure as much as it should. Green tea contains small amounts of vitamin K. This means it may decrease how well blood thinner medicines work. Since green tea acts as a mild stimulant, you shouldn’t use it with other stimulants. It may change the effects of other medicines.

Green tea is widely consumed worldwide for its health benefits. Many retrospectives and few recent studies attest to that fact. Its effect on cancer, diabetes, and cardiovascular diseases are well documented in both human and animal studies. Its impact on neurodegenerative disease in human beings however needs more human randomized clinical control trials. Drinking three to five cups of green tea per day seems to be optimal to reap the most health benefits. Try to choose a higher quality brand of green tea, because some of the lower quality brands can contain excessive amounts of fluoride (Lu et al. 2004).

That being said, even if you choose a lower-quality brand, the benefits still outweigh any risk.

Hottest Photo Reports
Catch up with all the political quotes from our politicians.
Advertise here
More from Health & Fitness
ModernGhana Links
November Is Diabetes Mellitus (DM) Awareness Month
70% Indians are thin outside but fat inside, with excess visceral fat in the belly, show preventive health tests at NURA
How can people with a family history of colorectal cancer reduce their risk of developing the disease?
TOP STORIES