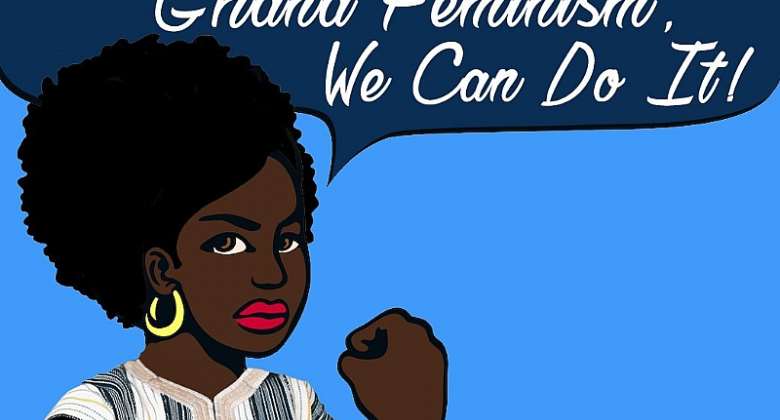 In the last couple of decades, feminist propaganda has made women commoners in society and that men are naturally oppressors of women.

It claims that wives are subordinate to their husbands at home, and that, outside the home, men have excluded women from political, economic, and cultural power (Anatomy of Female power by Chinweizu). The complexities of Ghanaian society will give credence to this assertion by the good Chinweizu. Yes, I believe the work done by pro-women development groups has closed this widened gap greatly. I look to find the gaps that have been closed and draw on the lessons from how the Ghanaian social construct has committed to its realization or otherwise. To this end, one would think with advancements in civilization and technology would alleviate such opinions about women, especially with more focus on the rights of women in the 21st century, however, this is not the case. People still uphold the views of women’s subjugation in the world in this contemporary times.

According to statistics(www.macrotrends.net), it will amaze you that our very own country Ghana has a literacy rate of 79.04% yet the role and status of women in the society remains almost the same pre- and post-independence. Why is this so? There is a popular saying, The background of a person normally depicts the person's way of life”; our culture and norms still have an impact on us despite our level of education. How our Ghanaian culture perceives women in terms of role and status is seen in the subsequent paragraphs:

First, professional fields contribute to the status of women in our Ghanaian community. With the issue of professions, most women venture into nursing, counseling, teaching, and entrepreneurship among others whiles men prefer professions like engineering, painting, barbering, driving, construction, and the like. The question is, why do few women venture into driving and few men into nursing? Is it gender bias or by choice or design (the physique)? Equality is not just being equivalent in number, quantity, or measure nor is it only by treating both sexes, and people of different races and religions fairly also equality means ensuring that every individual has an equal opportunity to make the most out of their lives, talents and abilities hence, choice and design play a major role in choosing of one’s profession.

Our culture perceived some work to be males’ job and some as ladies’ jobs making it difficult in these modern times for some women to venture into male-dominated jobs since that will demand more physical effort and for some men to venture into nursing, teaching and the likes because they are seen as mild jobs hence a lady’s job. Are women as mild as perceived? Genevieve Tetteh is Ghana's first female mining engineer. She was sent underground after just two years of service. Many doubted her strength and capabilities because mining was seen as a male job but yet Genevieve still went for it regardless. People still hold this perception that some jobs are for men whiles others are for ladies due to cultural norms. The profession should base on one’s capabilities, choices, and strengths and not just what society thinks.

Again, the political participation of women in Ghana depicts their status in society.

Although women are guaranteed political participation right under the 1992 constitution of Ghana, there is still a lack of female representation in government; there has never been a female president even though women occupy some seats in parliament. As of 2012, there were nineteen (19) women and two hundred and forty-six (246) men in parliament, a difference of 237, such a huge one.

All these are a result of the longstanding cultural norms where leadership has and is still being associated with men even in our small homes which makes it difficult for women to shoulder up with men even when they grow up. They also believe that women are mild for such leadership positions. Some women's leadership is frowned upon by society because of the mass ideology that women are incapable.

A lady was aspiring for the position of president in the Students' Representative Council of her school but is currently a vice to another male candidate. Do you know why she is no longer vying for the presidency but the vice? No one wanted to vice her and not even her fellow females. That cultural idea that women are supposed to be subordinate has thrived in the political system. Women are not appreciated, women who want parliamentary positions are criticized and underestimated even by their fellow women. Being a woman does not make you incapable, that is the equality we seek.

Furthermore, the educational system also contributes to the status of women in Ghana. Over a couple of years, Ghana has successfully strived hard to close the gap of educational inequality in the country even though countries like Afghanistan, Mali, Niger, and the like remain the toughest countries for a girl to get an education. According to the United Nations Girls' Education Initiative (UNGEI), educating a girl will increase their ability to gain access to a higher paying job which will increase the family's income and add up to the nation's economy unlike them being home and doing all such of domestic activities which will only benefit the family. An educated girl is less likely to marry young and more likely to lead healthy and productive lives to decrease the dependency ratio in the country. Are women educated for these? Or just to increase their dowry? Since monkeys play by size, perhaps educated men will like educated women as well. A woman with good education and strong financial backing is perceived to be disrespectful. They think that men would not want to marry them because of their standard of living. Men want to marry women who are submissive and would agree to do all house chores and be their baby-making machine. If you are a woman who holds her ground then you will not get a man to marry. This idea still thrives even after many years of civilization because of our cultural roots that labeled women as subordinates.

Why then give women access to education if our status still maintains as subordinates?

Finally, our Ghanaian family structure also contributes to the role and status of women.

Before a family is formed, the man goes to see the woman's family before the wedding takes place. During this process, a dowry popularly known as "bride price" is paid. The "price" in there made it look as if women were bought hence properties to their husbands.

In the pre-colonial era, polygamy was encouraged especially for wealthy men. This was traditionally seen as a source of labour for men, as multiple wives will call for more unpaid labour and additional wealth for fathers. In those days, the place of a woman was home, where they did most of the work whiles the men had to only provide and eat. The main issue is, 'has the role of women changed since then'? Even though most educated husbands do not consider this "property” issue and presently, more Ghanaian women are now getting out of their home jobs into paid jobs, the amount of domestic work performed by women remain the same leading to the fact that men generally make little or no contribution to domestic work due to the family structure of our Ghanaian culture or society.

In conclusion, as Ghanaians, we appreciate the extraordinary cultural values that have shaped our society but with the growing knowledge of civilization, things have changed. We now realize the significance of women in society in all aspects of life and not only in the kitchen. We think that it is time to put the cultural idea of women as subordinates aside and embrace the idea that women are equally capable of building society as men can. Women can thrive in all professions so far as they put their minds to it. We believe it is time to let go of that stereotypical notion. After all, it is said that "if you educate a man, you educate an individual but if you educate a woman, you educate the whole nation" (Professor Dr. Kwegyir Aggrey).

There is also a popular saying, "If you can't change a situation, change the perception of it because most of the stress comes from the way you respond not the way of life" (anonymous). With this, prominent women like Yaa Asantewaa, Ama Atta Aidoo, Sophia Akuffo, Georgina Wood, Genevieve Tettey and many others have proved that, they like any other Ghanaian woman can raise above the perception of women's place in society and that with this there is more to what lies in the chest of a woman than what she is seen and expected to do. The overall impact women have on our Ghanaian society as mothers, traders, and office workers among others cannot be taken for granted because our country is even a woman, Ghana our "Motherland".

Latest Photo Reports
Catch up with all the political quotes from our politicians.
Advertise here
More from Lifestyle
ModernGhana Links
Be not ignorant of this one thing
How Shall I Curse, Whom God Hath Not Cursed
Brethren Pray For Us, We Need Your Support
TOP STORIES