Ph.D. Women likely not to find men to Marry –Studies 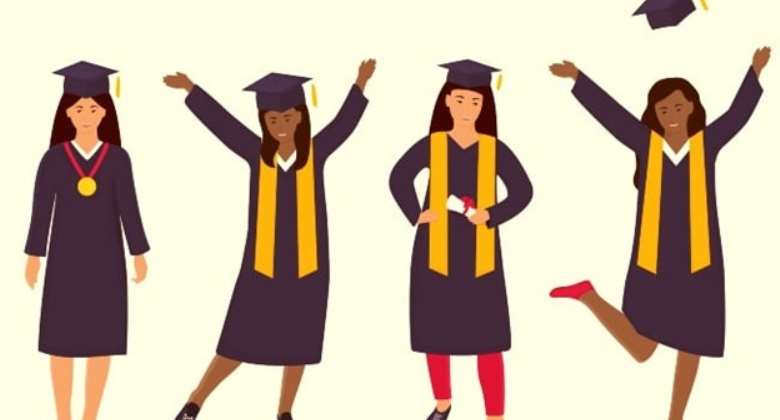 Studies found that the higher a woman acquires education, their chances of getting married are lower. However, when they finally get married, their union survived longer (Prof. Nyarkotey).

Education has been identified as one of the major factors that affect the marital decisions of women. Most women are caught between acquiring higher education and getting married early and they have to decide to choose one or find themselves being forced to be married (Coontz, 2012). Hence, there used to be a huge trade-off between choosing education and a husband. Three-quarters of the total number of women who graduated from College before 1900 in the United States remained unmarried (Coontz, 2012). This shows that those women have forgone marriage to pursue their educational aspirations Coontz (2012).

Though there is a debate about educated women intentionally choosing to be single, there is also the belief that others do not consciously delay or reject marriage. For this group of women, their achievements including higher educational attainment intimidate men. The educated woman is viewed in some communities as an intimidating figure to men and so unconsciously drives away prospective suitors. This belief or perception is linked to the assumption that the educated woman develops an assertive, independent character that makes it impossible for her to love, honor and “obey” a man as “real” wives should do (Coontz, 2012).

Some people even joke that when they meet a woman with a Ph.D., they need not find out what her area of specialization is. This is because, they assume that Ph.D. means “Putting Hubby Down” (Coontz, 2012). University education is considered a factor associated with later and fewer marriages for most women. Hence, there is the perception that higher education is negatively related to marriages (Raymo, 2013).

These have led some Ph.D. supervisors on African continents to even advise black women pursuing their Ph. Ds to marry before completing their degrees. This is because they feel their chances of finding a suitable suitor decline after completion. They feel black men feel uncomfortable marrying such women, probably due to ego issues. Other studies also explained the market is slim for such Ph.D. black women as they turn to also marry men in their class with a higher portfolio. Besides, men with PhDs or Professors would want to marry women who are not in their class. Singh and Samara (1996) argue that the level of education of a woman tends to influence the time and age at which she will commit to marriage.

I have also read numerous studies suggesting that the higher our black women acquired terminal degrees the higher their chances of not getting married. It is interesting how acquiring a terminal degree will affect their chances of getting a suitable spouse as compared to white women who also acquire a terminal degree. For instance, (Boyd et al. 2020) found unavailability of partners for educated black women as men prefer women of other races with similar education. This leads black women to compromise more to acquire their wants if they have the means to get their wants and deem that it is valuable enough to take a risk.

For highly educated Black women, their negotiation of partner scarcity can directly influence their engagement in or acceptance of compromising behaviors. Given that there is an acknowledgment within the research that educated Black women to perceive a lack of ideal available partners, it is asserted that these women may perceive that they must compromise some aspect of their partner selection criteria and ensuing expectations and beliefs. As such, these women may be less likely to leave unsatisfying relationships or renegotiate personal values or perceptions of an ideal partner to “fit” what is currently available. This could happen at various stages of the relationship and could directly shape the power dynamics within the couple. This also has implications for negative outcomes, depending on the degree to which a woman perceives herself as having power in the relationship. Also, research from Yale University suggests that highly educated black women are twice as likely to have never been married by the age of 45 as white women with similar education.

Niambi Carter, 31, has a Ph.D. and is an assistant professor of political science at Purdue University, admits that she has been hard-pressed to find a black mate with a similar level of education. A similar study(Muntari-Sumara, B, 2015) from Ghana also revealed that the majority of educated women prefer marriage to singlehood and cohabitation. Companionship and societal expectations were identified as the major influencers of women’s marital decisions. Also, education was found to affect the marriage preferences of women to some extent. There was a direct relationship between higher educational aspiration and marriage desire.

While the research does not address reasons these marriages last longer, we do know that college-educated adults marry later in life and are more financially secure than less-educated adults.

Though such women struggled to find suitors, research also found that such women who finally marry have lower divorce rates ( McLanahan, Sara. 2004. “Diverging Destinies: How Children Fare Under the Second Demographic Transition.” Demography. 41(4): 607-627.) There are several reasons for this. Less educated individuals typically marry at an earlier age, which is associated with higher divorce rates. Additionally, the lower incomes and greater economic insecurity of those with less education increase stress, affecting divorce.

A previous study found a different association( Casey et al. 2012) and estimate that 78% of college-educated women who married for the first time between 2006 and 2010 could expect their marriages to last at least 20 years. But among women who have a high school education or less, the share is only 40%. 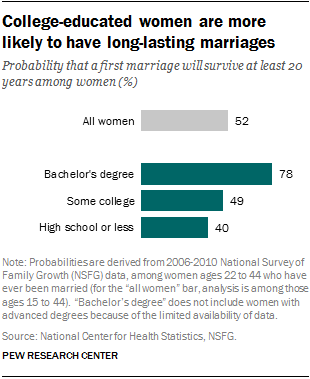 England and Bearak(nd) found that early in the life cycle, those who ultimately get more education are less likely to have married than their less educated counterparts. This is because those staying in school longer also delay getting married longer. But by age 40, the well-educated have caught up with the less educated and even surpassed them in the percentage that has married. The education differences in whether people ever marry are small for whites, but quite large for blacks, owing partly to the very low marriage rates of the most disadvantaged blacks—those without a high school or less.

Living together and Divorce 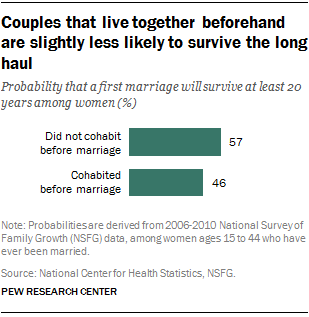 The Pew Research Center also reports that couples who lived together before getting married had a slightly lower chance of having a long-term marriage than those who did not live together.

Among women who did not live with their spouse before getting married for the first time, 57% can expect to still be married after 20 years. For women who lived with their spouse before marriage, the probability of being married for at least 20 years is somewhat lower – 46%. Whether the couple was engaged when they lived together didn’t make a difference in women’s chances of long-lasting marriages.

For men, the patterns are slightly different. In this case, it matters whether men are engaged to a partner they lived with before getting married. Men who lived with their future spouse without being engaged had a slightly lower chance of having a long-term marriage (49%) than those who were engaged first (57%). Men who didn’t live with their partner before getting married had a 60% chance of celebrating their 20th anniversary. 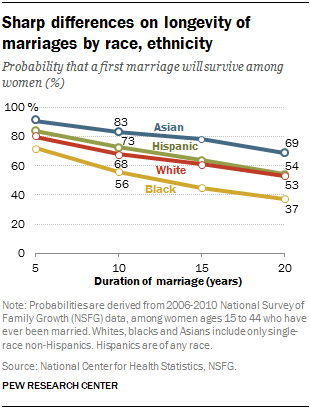 Marriage survival is also dependent on race and ethnicity. Some of these differences could be related to educational differences among adults with different racial or ethnic backgrounds. The Pew Research Center also found that Asian women, who are among the most educated, are more likely than any other racial or ethnic group to have a long-term marriage. “For Asian women who were married for the first time between 2006 and 2010, the chance that they may celebrate their 20th wedding anniversary is nearly 70%. By contrast, about half of Hispanic and white women may see their marriages last that long. And for black women, the chance is 37%.

Among men, Hispanics have the highest likelihood of being in a long-lasting marriage (findings about Asian men are not included because the sample size was too small to be nationally representative). For those who married for the first time between 2006 and 2010, about six-in-ten Hispanic men (62%) could expect their marriages to last at least 20 years, compared with 54% of white men and 53% of black men”.

Studies have found that the higher a woman, especially a black educated herself, the less she is to get a suitor. For instance, Frazier et al. (1996) found out that more educated and financially secure women exhibit less desire for marriage. Singh and Samara (1996) found different reasons in their study. Others such as Goldscheider and Whaite, (1986) and Oppenheimer (1988) likewise argue that women who have a college education and have strong work orientation or relatively high income may delay their time of marriage but that does not interfere with their desire for marriage. They also state that this category of women has stronger marriage desirability but may delay marriage because they need to build the capability in helping to reduce some of the economic burdens that are borne primarily by their partners.

Gordon (2003) argues that highly educated women’s lower desire for marriage may be highly linked to the perceived lack of high-quality mates desired by these women and not necessarily their educational level. Bledsoe, (1990) also centered on women’s fertility issues and education and found that fertility is somehow lower among educated women in Africa as young women who manage to get more education to tend to avoid pregnancy. Bledsoe (1990) also found out from Brandon’s 1984 survey that educated women in Freetown have the longest marriage delays.

This Might Surprise You. This means that our women pursuing PhDs and other higher education; have limited suitors but when they get married, they have higher chances of lasting marriages according to studies.