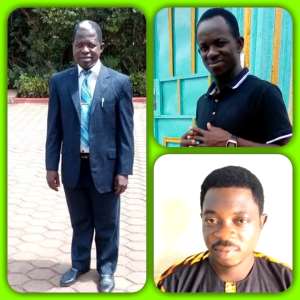 Complementary education plays important roles in helping a child to learn other languages in school.

Through non-formal education program, three brothers of the same mother and father who never attended school from day nursery through to primary six have now become University graduates.

The three brothers hail from Dalaanyili, a village in the Nanumba South District of the northern Region. They started their formal education by enrolling into Junior High School form one at Central Junior Secondary School in Bimbilla. The three brothers: John Uwumborjeemi Nlenkiba, Emmanuel N-yajache Nlenkiba and Abraham Njonaan Nlenkiba learnt their local language Likpakpaanl through non-formal education evening teaching and through the knowledge gained, they were able to read and write English language which helped them enrolled into what is now known as Junior High school.

John Uuwmborjeemi Nlenkiba is the 3rd born of the mother of 9 children, he enrolled into Central Junior Secondary School from 1990 to 1993 where he became Assistant School Prefect (ASP) and was able to become second best students with aggregate 8 in the basic education certificate examination. He proceeded to Wesley Grammar Secondary School and after successfully passing SSSCE he gained admission into Ghana Christian College and Seminary where he pursued Bachelor of Arts in Religious Studies, from there he became a pastor. He again proceeded to the University of Ghana where he graduated with Master of Arts in the study of Religions. He currently reads and writes in languages such as English, Likpakpaanl, Dagbani, Mampruli, Twi and Arabic.

He currently serves as a pastor and a part time lecturer at Ghana Christian and leadership training institute based in Tamale.

Emmanuel N-yajache Nlenkiba is the 2nd to last born of the mother. He also started his education at the same central Junior Secondary School from 2001-2004. After becoming successful in B.E.C.E he had admission into Ghanata Senior High School but dropped out due to financial challenges. He re-enrolled into Fumbisi Preparatory JSS and came out with aggregate 11. He gained admission into Nandom Secondary School where he read General Science Program. After WASSCE, he gained admission into Ankaful Mental Health Nurses Training College where he graduated with Diploma in Psychiatric Nursing. After serving as a Psychiatric Nurse for 7 years in Presbyterian health center in Widana in the Upper East Region. He again proceeded to the University of Cape Coast where he is now in the final year pursuing Bachelors Degree in Psychiatric Nursing.

Abraham Njonaan Nlenkiba is the last born of their mother. He and his immediate elder brother enrolled into the same JSS together in the same year. Abraham got aggregate 10 and gained admission into Notre Dame Seminary Secondary school where he offered General Arts Program and also served as the Development Prefect of the school. He gained admission into the University of Ghana where he read Bachelor of Arts Degree in Social Work with Sociology. After graduating in 2014, he taught as a subject teacher in Holy Spirit Senior High School in Chamba from 2015-2018. From there he had appointment with Ghana Education Service and was posted to Bimbilla Senior High School where he served as a subject teacher for one year. He took his transfer to Tamale Girls Senior High School where he serves as a subject teacher till date. He is also currently pursuing Bachelor of Laws Program.

Being an MP is serious business; the responsibility of a Min...
19 minutes ago