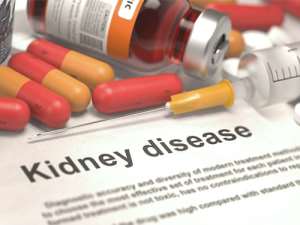 Pills or drugs are one of the inventions of science that cannot be overlooked. Pills are substances other than food intended for use in the diagnosis, cure, mitigation, treatment or prevention of a condition or disease. As humans, we are in constant motion and sometimes our bodies flop and need refreshing. We mostly rely on drugs to treat our medical problems. But just like every invention, there is a bad side (side effect) to pills too.

The kidneys are a pair of bean-shaped organs present in all vertebrae. They are located just below the ribcage, each on either side of the spine. They measure about 4-5 inches long, roughly the size of a fist. As one of the most important organs of the body, it is responsible for filtering blood and removing waste and excess fluid. The kidney filters about 200 quarts of blood to form 1-2 quarts of urine. It maintains a balanced electolyte level in the body. It also make hormones that control blood pressure and also a hormone called erythropoietin which tells the bone marrow to make red blood cells. An active form of vitamin D is produced by the kidney which absorbs calcium and phosphorus to make strong, healthy bones. Pills which affect the kidney are called nephrotoxic medications.

Non steroidal anti-inflammatory drugs(NSAIDs) are a broad group of non-opioid analgesic drugs used to treat conditions such as arthritis. Prostaglandins are a family of chemicals that promote inflammation necessary for healing. When inflammation occurs, there is a resulting pain or fever. NSAIDs reduce prostaglandins throughout the body hence reducing pain associated with joint and muscle diseases and injuries. NSAIDs reduce pain, fever, menstrual cramps and an array of other medical conditions. The kidneys happen to be the second most affected organ by NSAIDs. The inhibition of renal prostaglandin results in acute deterioration of renal function. It also causes decreased blood flow to the kidneys, sudden kidney failure and progressive kidney damage. All NSAIDs are associated with acute kidney injury which may be hemodynamically mediated or immune mediated. The Centre for Adverse Reactions Monitoring (New Zealand) received 119 reports of renal adverse reaction associated with NSAIDs use between 2000 and 2012. Another report shows that NSAIDs accounts for 15% of all cases of induced acute renal failure.

Acetaminophen popularly known as paracetamol is a widely used painkiller. It has been proved that excessive and long-term use of acetaminophen can cause kidney damage. A report from National Kidney Foundation shows that 3-5% of new cases of chronic kidney failure each year may be due to overuse of painkillers. Long-term exposure to pain killers can damage the small filtering blood vessels in the kidney causing a condition called analgesic nephropathy.

Antibiotics also called antibacterials are drugs that destroy(bactericidal) or slow down(bacteriostatic) bacterial growth. They are used to treat ear, sinus, skin, dental infections, meningitis, whooping cough and so on. In hospital wards, antibiotics account for approximately 10% of acute renal failure and 60% of drug-related kidney damage. Aminoglycosides, even at low doses can cause toxicity in renal tubular cells whose role in kidney filtration exposes them to high level of toxins. Sulfonamides can produce crystals which do not dissolve and they block urine flow. Vancomycin may cause kidney damage and acute interstital nephritis. Fluoroquinolones are common broad spectrum antibiotics most often used to treat respiratory and urogenital infections. They are associated with causing acute kidney injury. In a study carried out in a hospital, 18% developed acute kidney injury and Aminoglycosides, amphotericin B, vancomycin and beta-lactum antibiotics were the lead causes.

Diuretics are drugs that improve diuresis. They are also called water tablet/pills. They increase production of urine. Types are thiazides, loop and potassium sparing. The mechanism of removing sodium (and potassium) helps remove water from the body thereby decreasing the amount of fluid flowing through the veins and arteries. This helps to relax the blood vessels and help in treating high blood pressure. Diuretics also treat heart failure, diabetes insipidus and kidney failure. Even though they treat kidney failure, removal of extra fluid could lead to dehydration. It could also lead to swelling and inflammation of the kidneys.

Laxatives are drugs that relieve constipation. They induce bowel movement and loosen stools to ease its passage. Sodium phosphate laxatives may cause acute phosphate nephropathy. This is a condition in which there is phosphate crystal deposition in the kidneys which causes the loss of kidney function leading to kidney failure. The crystals block urine flow and cause damage to the kidney.

The pills we take in our everyday life have tremendous effects in treating our medical problems, but we can't override the fact that they have a negative effect on our health one way or the other. So before taking a pill next time, consider natural remedies which have a passive side effect compared to these pills. Importantly, adhere strictly to prescription and avoid long-term use of pills to improve kidney and body health.

Ummusalma Ahmad Kinta is an undergraduate student of Medicine and Surgery at the prestigious Bayero University, Kano. She is a freelance health writer and editor who also enjoys educating all and sundry about healthy living and holistic healing approach.