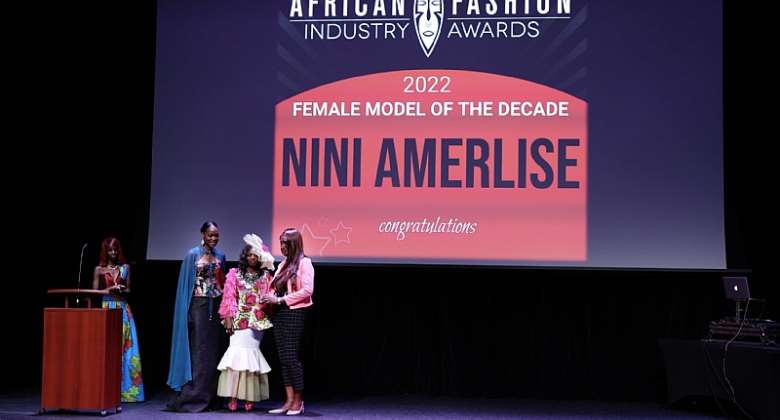 Nini Amerlise, a Canadian-Ghanaian supermodel, has been an iconic face in the fashion industry since 2013 and took her role seriously after competing at African Fashion Week Toronto in 2014. Though the beautiful diamond in rough was rejected and did not advance far in the competition, adversity ignited a new flame within her.

At the 10th annual African Fashion Industry Awards hosted by African Fashion Week Toronto, she received the award "MODEL OF THE DECADE". The largest fashion platform in Canada that recognizes and celebrates African and Caribbean talent.

Recently married Igbo decent artist B'kem, the 28-year-old has experienced a life filled with bliss and gratitude. Having amassed an impressive list of accolades and achievements, the 28-year-old has no plans to slow down. She won the Top Model award at the 2015 Miss International City pageant and received the Women Leadership award from Gary Anandasangaree, a Canadian MP in 2018. Nini was invited to experience her Ghanaian homecoming in 2021 as the face of Ghana Model Awards and was named the Breakout Model of the Year honorary award winner. As of today, Nini Amerlise holds 11 international awards worldwide. In both the African and North American Diasporas, she has built esteem and confidence for generations of creatives and models through NA Management Inc and We Are Royals Inc. We salute her.

In the years after winning Supermodel Canada's Season One, she earned a reputation as an actress and a TV host for the Travel Africa Network.

Aside from making appearances in the "Stitched" fashion competition on Slice TV and her designer winning the show, she also appeared on the Cover of Share Newspaper, NBC, Fox News, CBS, CTV, Vogue UK, Vogue UK, The Daily Mail, Vogue USA, Glamour Magazine, Glam Africa magazine, Jamaican Gleaner magazine, and Men's Health South Africa magazine. Next week, she and celebrity actor Joseph Benjamin will attend a red carpet screening of "Stay," in which she has a supporting role.

We warned gov’t against reckless borrowing, wasteful spendin...
25 minutes ago