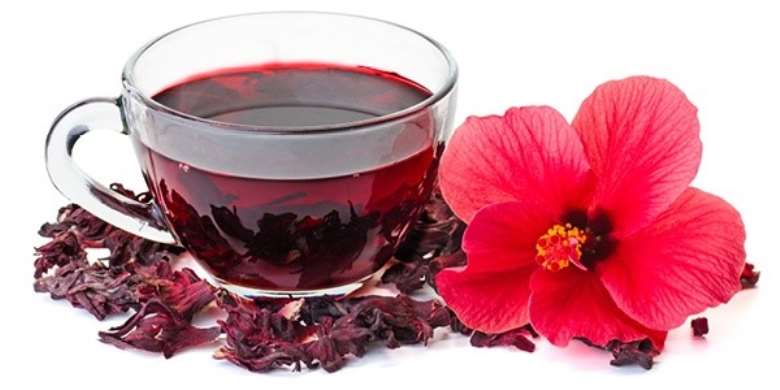 Hibiscus tea is an herbal tea that’s made by steeping parts of the hibiscus plant in boiling water. Ghana is gifted with the abundance of the Hibiscus Sabdarrifa plant and it is time we tap the full potential of this plant. One of the most impressive and well-known benefits of hibiscus tea is that it may lower blood pressure .

A similar study by Mozaffari-Khosravi et al.(2013) demonstrates that the therapeutic effectiveness of Hibiscus Tea and Green Tea drinking by the end of intervention was 43.5% in the hibiscus Tea group and 39.6% in the Green Tea group.

Another study in Nigeria by Nwachukwu et al. (2015) discovered hibiscus tea to be more effective than hydrochlorothiazide , a common blood-pressure lowering medication, at decreasing blood pressure. The most significant finding was that hibiscus tea, unlike its study counterpart, hydrochlorothiazide, did not cause electrolyte imbalance . The study had this to say: “Hibiscus Tea(Natural medicine drug) was a more effective antihypertensive agent than HCTZ(conventional medicine drug) in mild to moderate hypertensive Nigerians and did not cause electrolyte imbalance.

One earlier study by Herrera-Arellano et al. (2004) studied head to head with one of the most common pharmaceutical interventions for the treatment of hypertension, Captopril, an ACE inhibitor. In this study, individuals were either given daily hibiscus tea or 25 mg of Captopril twice per day. The result showed that the hibiscus tea and the Captopril had no significant difference in hypotensive effects, meaning that both the standard pharmaceutical drug and the hibiscus tea worked equally well in lowering the participants’ blood pressure.

In a more recent retrospective study by Jalalyazdi et al.(2019), where the case group received two standard cup of sour tea every morning for 1 month. They found that, using H. sabdariffa as sour tea two times a day can be effective in managing blood pressure in stage one hypertension along with lifestyle and dietary modification. An observational study in Ghana suggests daily consumption of hibiscus tea, lowers blood pressure level and may prove an effective component in cardiovascular health management (Obu, 2020).

Nurfaradilla et al. (2019) had this say: “Hibiscus sabdariffa aqueous extract alone can reduce blood pressure. This extract appears could be used as a supplement with captopril but may not provide any additional benefit”. What they meant was that hibiscus tea can be used as a standalone treatment for high blood pressure.

In another multicentric pilot clinical study in Jordan by Al-Anbaki et al.(2019), thirty-eight participants with blood pressure (BP) above 140/90 mmHg were involved. Of the 38 participants, 29 finished the program, 72% were taking antihypertensive medication due to uncontrolled hypertension and 28% were not. H. sabdariffa was generally well tolerated: 38% of participants reached the target BP at the end of the study and 65% saw their systolic BP decrease by at least 10 mmHg. The study concluded that, H. sabdariffa (karkade) is generally well tolerated and seems to be helpful in treating uncontrolled hypertension, with or without medication.

In another Egyptian study by Elkafrawy et al.(2020) which randomized 134 patients to receive captopril 25 mg, low-dose NW Roselle, or high-dose NW Roselle twice daily for 8 weeks. The study concluded that Roselle had comparable antihypertensive efficacy and safety to captopril in Egyptian patients with grade 1 essential hypertension.

A similar randomized clinical trial by Bourqui et al.(2020) assessed the clinical effectiveness of hibiscus sabdariffa of 219 hypertensive patients in Senegal and captopril as the control for six months. The study found hibiscus to be as effective as captopril over the 6 months.

Another study by Kamyab et al. (2021) showed that hibiscus tea has the same effect as conventional medicines without serious side effects. The study further introduces sour tea as a suitable herbal medicine for high blood pressure

A systematic review by Pattanittum et al.(2021) found that the evidence is currently not strong enough compared to placebo for controlling or lowering blood pressure in people with hypertension. This contradicts an earlier systematic review and meta-analyzed by Boushehri et al.(2020) which suggest that sour tea consumption could have beneficial effect in controlling glycemic status and blood pressure among adult population.

A recent systematic review by Ellis et al.(2022) proved otherwise and found that regular consumption of hibiscus could confer reduced cardiovascular disease risk. A similar study by Nurfaradilla et al.(2020) took a different perspective and indicated that coadministration of H. sabdariffa L. aqueous extract could change the pharmacokinetic profile of captopril; therefore, its coadministration should be avoided.

In one study in rats by Ajiboye et al. (2011), hibiscus extract increased the number of antioxidant enzymes and reduced the harmful effects of free radicals by up to 92%. Another similar rat study by Ochani and Mello (2011) had similar findings, showing that parts of the hibiscus plant, such as the leaves, possess potent antioxidant properties.

In addition to lowering blood pressure, some studies have found that hibiscus tea may help lower blood fat levels, which are another risk factor for heart disease. For instance, in a retrospective study by Khosravi et al .(2009), 60 people with diabetes were given either hibiscus tea or black tea. After one month, those who drank hibiscus tea experienced increased “good” HDL cholesterol and decreased total cholesterol , “bad” LDL cholesterol and triglycerides .

Another study by Diaz et al. (2014) agrees that those with metabolic syndrome showed that taking 100 mg of hibiscus extract daily was associated with decreased total cholesterol and increased “good” HDL cholesterol.

A Lab study conducted in Ghana at the Kwame Nkrumah University of Science and Technology (KNUST) on efficacy showed the product Dr. Nyarkotey Herbal Tea which has the ingredient hibiscus sabdariffa produced dose-dependent reduction in the arterial blood pressure of the anaesthetized cat comparable to acetylcholine. The depressor effects of acetylcholine and Dr. Nyarkotey Herbal tea on the blood pressure of the anaesthetized cat were inhibited by 72.3+5.21% and 55.6 + 6.82% respectively, suggestive of muscarinic mediation. The report states that, as per the findings, “Dr. Nyarkotey Herbal Tea has hypotension effect and hence could be used in the management of hypertension”.

The Grand View Research(2022) report that the global hibiscus flower powder market size was estimated at USD 113.3 million in 2019 and is expected to expand at a compounded annual growth rate (CAGR) of 7.2% from 2020 to 2027 with a revenue forecast of USD 197.0 million. North America dominated the market for hibiscus flower powder and accounted for over 34.5% of global revenue share in 2019.

A review of clinical trials by Montalvo-González et al.(2022) suggests that hibiscus is generally safe for human consumption. This notwithstanding, Hibiscus Tea should be avoided in patients on blood thinning medications, pregnant and lactating mothers, and in people with low blood pressure (hypotension) and low blood sugars (Hypoglycemia). This is demonstrated in one study by Ndu et al. (2011) which agrees that though hibiscus tea may be a safe and natural way to help lower blood pressure, it is not recommended for those taking hydrochlorothiazide, a type of diuretic used to treat high blood pressure, as it may interact with the drug. This means that hibiscus sabdariffa tea can be used as an alternative medication for high blood pressure management.

Several quality studies have found that hibiscus tea may lower both systolic and diastolic blood pressure. Additionally, the quality studies note that, there is no need taking both Hibiscus Tea and Pharmaceutical drug to lower blood pressure at the same time. The reason is that; Hibiscus Tea produces the same effect as standard pharmaceutical drug for hypertension and is safe. Taking them together can prevent an interaction so consult your physician. For the dosing, 3 concentrated Cups a day per studies is the ideal.

The writer is a Professor of Naturopathic Healthcare and President of Nyarkotey College of Holistic Medicine & Technology (NUCHMT)/African Naturopathic Foundation. E-mail: [email protected] .

Hottest Photo Reports
Catch up with all the political quotes from our politicians.
Advertise here
More from Health & Fitness
ModernGhana Links
Debunking the myths of hair transplant
Understanding the cognitive benefits of breastfeeding. How breast milk promotes healthy early brain development
Hepatitis awareness during the month of July
TOP STORIES