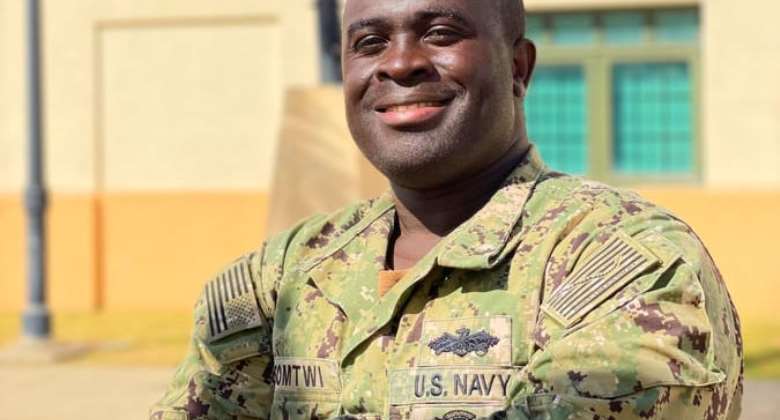 Eugene Bosomtwi, a 2006 graduate of St. Augustine's College in Cape Coast, Ghana serves the U.S. Navy as a utilitiesman at the Public Works Department operating out of Sigonella in eastern Sicily, Italy.

For Bosomtwi, originally from Akim Oda in the eastern region of Ghana, joining the U.S. Navy marked the realization of his American Dream.

In a press statement on April 4, from the Navy Office of Community Outreach in Millington, Tennessee, USA- Eugene Bosomtwi said: “I came to the U.S. from Ghana in July 2012 and joined the Navy in 2014. As an immigrant, I was poised to live the American Dream and I wanted to serve our great country and also start a better life for myself and my family. That decision has been the best decision of my life.”

Bosomtwi emphasized that he relies on skills and values learned in Ghana to succeed in the Navy. “Always treat everyone with respect and kindness. Always learn something positive from the mistakes you make in life. Never give up on yourself, and always believe in yourself,” he added.

The U.S. Navy has many opportunities for a Seabee (member of U.S. Navy construction battalions) like Bosomtwi to excel as a Sailor, so he takes great pride in serving his country (the US) and the Navy. “It means everything to me to be a Seabee. We provide humanitarian assistance in the event of natural disasters and also during Operation Allies Refuge where we received more than 4,300 evacuees from Afghanistan,” he stressed.

Naval Air Station (NAS) Sigonella is an Italian Air Force base, and a U.S. Navy installation at Italian Air Force Base Sigonella in eastern Sicily, Italy. The (NAS) base provides consolidated operational, command and control, administrative, logistical and advanced logistical support to U.S. and other NATO forces. NAS also supports a rotation of various squadrons and multi-service, multi-national transient aircraft.

The prosperity and security of the US depend on a strong and ready Navy. Fact is, more than 90 percent of all trade traveling by sea, and 95 percent of the world’s international phone and internet traffic carried through fiber optic cables lie on the ocean floor.

The Navy Office of Community Outreach in Millington, Tennessee, USA travels around the globe to collect photos of sailors, to share with their hometown media.

I sold my virginity to a fetish priest for money, now my vag...
55 minutes ago