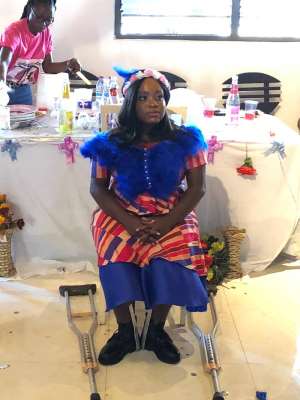 A survivor of both spina bifida and hydrocephalus, Dorcas Margaret Madjitey, has broken all odds in her dreaded health condition, journalist Bright Philip Donkor gathered.

The dilemma, notwithstanding, comes in the wake of her huge contribution to social development through her periodic sensitization of the condition and donations to patients like her suffering from hydrocephalus and spina bifida.

According to her, doctors at the Korle Bu Teaching Hospital (KATH) say the disease has succeeded in sending innocent babies to their early graves. Unfortunately, for it, it couldn’t try that on its next victim, Dorcas.

She made this known to the Reporter over the weekend at the Ashaiman – Lebanon Zone 2, as part of activities marking her silver jubilee intended also to promote her Foundation on the theme ‘‘Let love lead’’.

‘‘Today is a happy day for me; but more importantly, I want to reach out to more physically challenged persons and partner other organisations to create awareness on hydrocephalus and spina bifida on October 25, 2021.

‘‘My personal experience triggered me to set up the Dorcas Margaret Foundation (DMF) a year ago to focus on the holistic development of persons with disability,’’ she disclosed to the Reporter.

She explained that for society to grow, it was paramount to tackle the spiritual, emotional and psychological needs of vulnerable persons, in addition to the charitable deeds usually shown them by philanthropists.

‘‘Some people give just for the sake of giving, but do not follow up to ascertain how these people are faring in other aspects of their lives. There are people who may be experiencing one form of misery or other and, I believe, I could serve as their source of encouragement and inspiration,’’ she sad

The Foundation, she added, is bent on catering for the cost surgery of a 12-year-old boy suffering from hydrocephalus and thalassemia but who she felt still needed support and collaboration from groups and individuals.

Her mother, Rev. Dr. Mrs Joyce Orleans Madjitey, had revealed that her daughter’s condition was unexpected, but believed that the God of impossibilities would salvage the situation.

‘‘Although, doctors who played a major role in her coming to this world predicted a slim chance of survival and there were complications after her birth, I took hope and strength in the word of God.

‘‘Their condition is such that if you’re not vigilant as a parent, your child can just die. She consistently wanted to commit suicide, not more than three times. She even attempted suicide during her education at Cape Coast Technical University because she couldn’t make her Mathematics when the condition manifested during examination.

Mrs Madjitey further stated that there were certain instances she cried because she felt like God has forsaken her after numerous early and dedicated service to Him.

However, she didn’t lose hope and encouraged Dorcas never to give up because God has special plans for her. ‘‘I fervently prayed and used the Scriptures to consistently revive her hope and these had had a positive result on her life today,’’ she pointed out.

Dorcas admitted that her condition was very disturbing and that the infections that accompany it was massive. ‘‘This had affected my social interactions and self-esteem; but unflinching support and prayers from family and well-meaning people enabled me to soldier on in confidence.

‘‘My Foundation needs financial support to save the life of the 12-year-old boy who is in similar condition that I was once in before,’’ she appealed.

Showing gratitude for the social and family support received throughout her 25years, she emphasized that the public should stop the stigmatisation, exclusion and discrimination against persons with disability. ‘‘One would not be infected with the disability if he or she interacts with them and they all have a place in society.

‘‘Persons with disability should love themselves first before anyone else. Never renege in praying and God’s purpose for you will materialize in the not so distant future,’’ she encouraged the public.

Spina bifida is a birth defect in which a developing baby’s spinal cord fails to develop properly; and hydrocephalus is an abnormal accumulation of fluid on the brain which could lead to brain damage if left untreated. The World Spina Bifida and Hydrocephalus Day comes would be marked on October 25, 2021 on the theme, ‘‘Unlock your right to health’’ to raise awareness and understanding of the rights of people living with these conditions.

The writer, Bright Philip Donkor is passionate about the welfare of the vulnerable and people living with disability in the society.

Latest Photo Reports
Catch up with all the political quotes from our politicians.
Advertise here
More from People & Places
ModernGhana Links
Like Asamoah Gyan, Everybody Needs An Autobiography ― And This Is How Scribe Helps You To Have One!
Meet St. Augustine's Old Student turned U.S. Navy Sailor serving at Naval Air Station Sigonella
Meet Princess E. Yeboah, a rising Ghanaian model & youtuber
TOP STORIES